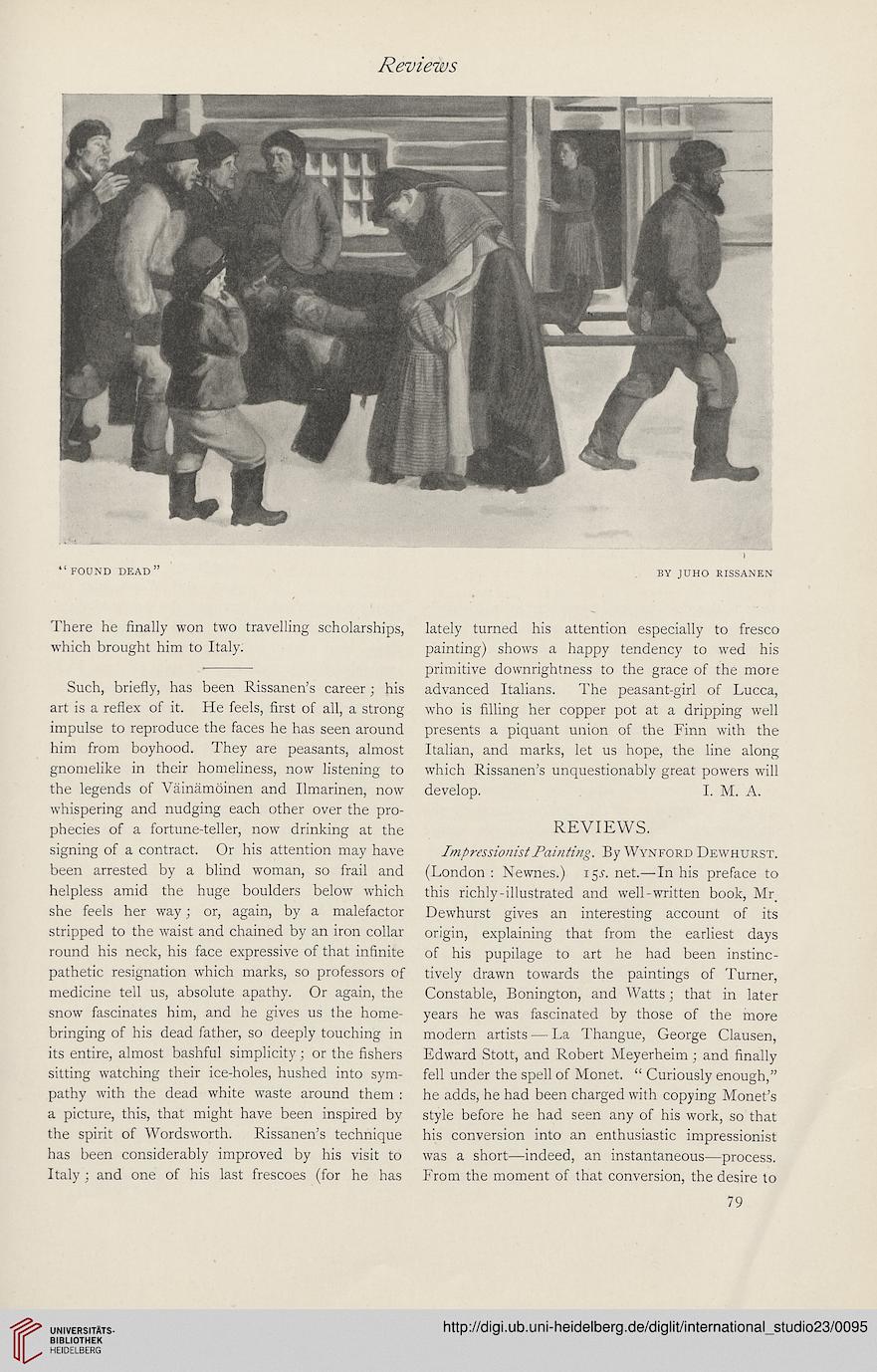 I
BY JUHO RISSANEN

There he finally won two travelling scholarships,
which brought him to Italy.
Such, briefly, has been Rissanen’s career; his
art is a reflex of it. He feels, first of all, a strong
impulse to reproduce the faces he has seen around
him from boyhood. They are peasants, almost
gnomelike in their homeliness, now listening to
the legends of Vainamoinen and Ilmarinen, now
whispering and nudging each other over the pro-
phecies of a fortune-teller, now drinking at the
signing of a contract. Or his attention may have
been arrested by a blind woman, so frail and
helpless amid the huge boulders below which
she feels her way; or, again, by a malefactor
stripped to the waist and chained by an iron collar
round his neck, his face expressive of that infinite
pathetic resignation which marks, so professors of
medicine tell us, absolute apathy. Or again, the
snow fascinates him, and he gives us the home-
bringing of his dead father, so deeply touching in
its entire, almost bashful simplicity; or the fishers
sitting watching their ice-holes, hushed into sym-
pathy with the dead white waste around them :
a picture, this, that might have been inspired by
the spirit of Wordsworth. Rissanen’s technique
has been considerably improved by his visit to
Italy ; and one of his last frescoes (for he has

lately turned his attention especially to fresco
painting) shows a happy tendency to wed his
primitive downrightness to the grace of the more
advanced Italians. The peasant-girl of Lucca,
who is filling her copper pot at a dripping well
presents a piquant union of the Finn with the
Italian, and marks, let us hope, the line along
which Rissanen’s unquestionably great powers will
develop. I. M. A.
REVIEWS.
Impressionist Painting. By Wynford Dewhurst.
(London : Newnes.) 15-f. net.—-In his preface to
this richly-illustrated and well-written book, Mr.
Dewhurst gives an interesting account of its
origin, explaining that from the earliest days
of his pupilage to art he had been instinc-
tively drawn towards the paintings of Turner,
Constable, Bonington, and Watts; that in later
years he was fascinated by those of the more
modern artists — La Thangue, George Clausen,
Edward Stott, and Robert Meyerheim; and finally
fell under the spell of Monet. “ Curiously enough,”
he adds, he had been charged with copying Monet’s
style before he had seen any of his work, so that
his conversion into an enthusiastic impressionist
was a short—indeed, an instantaneous—process.
From the moment of that conversion, the desire to