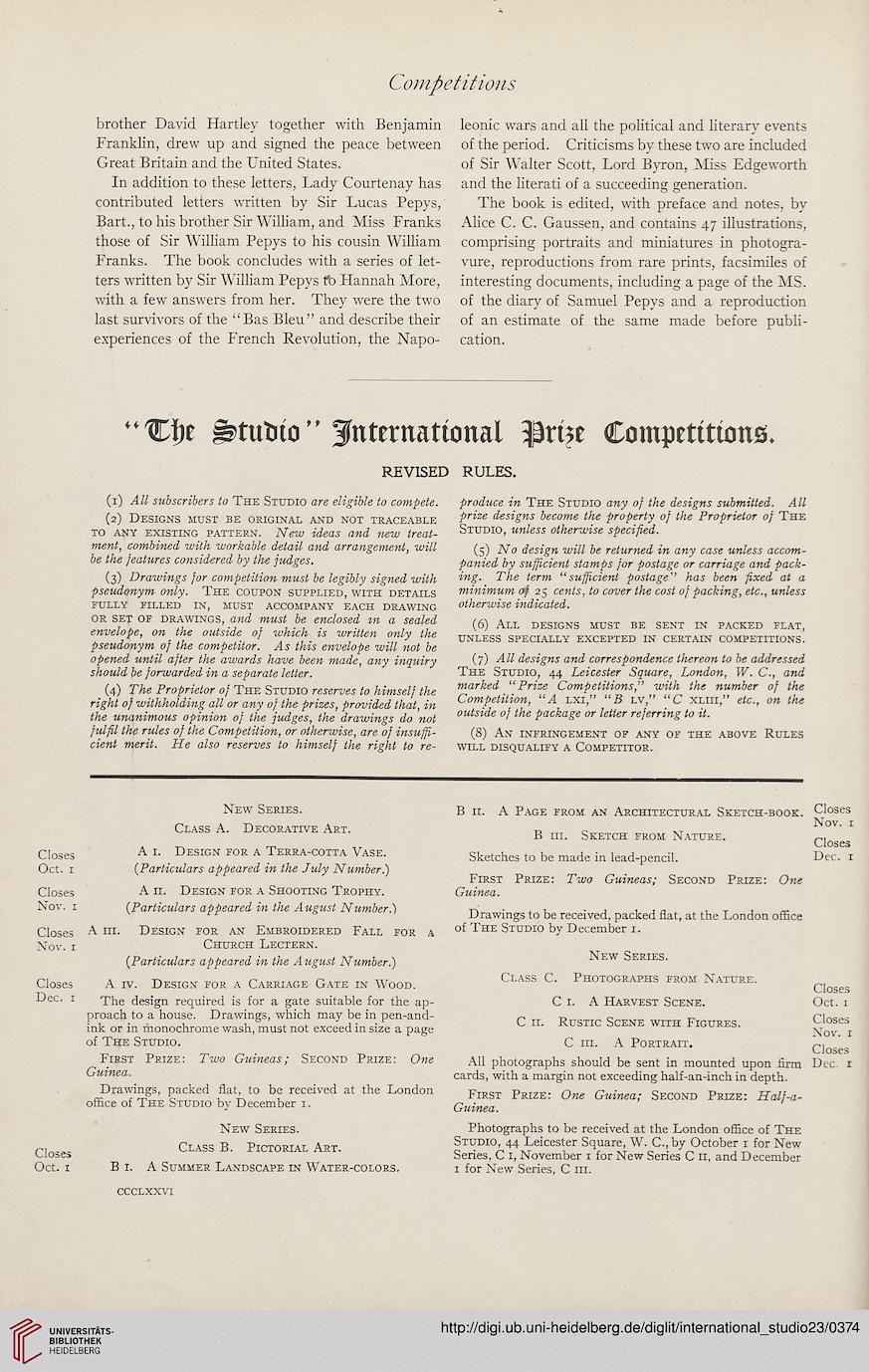 brother David Hartley together with Benjamin
Franklin, drew up and signed the peace between
Great Britain and the United States.
In addition to these letters, Lady Courtenay has
contributed letters written by Sir Lucas Pepys,
Bart., to his brother Sir William, and Miss Franks
those of Sir William Pepys to his cousin William
Franks. The book concludes with a series of let-
ters written by Sir William Pepys tb Hannah More,
with a few answers from her. They were the two
last survivors of the “Bas Bleu” and describe their
experiences of the French Revolution, the Napo-

leonic wars and all the political and literary events
of the period. Criticisms by these two are included
of Sir Walter Scott, Lord Byron, Miss Edgeworth
and the literati of a succeeding generation.
The book is edited, with preface and notes, by
Alice C. C. Gaussen, and contains 47 illustrations,
comprising portraits and miniatures in photogra-
vure, reproductions from rare prints, facsimiles of
interesting documents, including a page of the MS.
of the diary of Samuel Pepys and a reproduction
of an estimate of the same made before publi-
cation.

(1) All subscribers to The Studio are eligible to compete.
(2) Designs must be original and not traceable
to any existing pattern. New ideas and new treat-
ment, combined with workable detail and arrangement, will
be the jeatures considered by the judges.
(3) Drawings for competition must be legibly signed with
pseudonym only. The coupon supplied, with details
FULLY FILLED IN, MUST ACCOMPANY EACH DRAWING
OR set of drawings, and must be enclosed in a sealed
envelope, on the outside oj which is written only the
pseudonym 0} the competitor. As this envelope will not be
opened until after the awards have been made, any inquiry
should be forwarded in a separate letter.
(4) The Proprietor of The Studio reserves to himself the
right of withholding all or any of the prizes, provided that, in
the unanimous opinion of the judges, the drawings do not
f ulfil the rules of the Competition, or otherwise, are of insuffi-
cient merit. He also reserves to himself the right to re-

produce in The Studio any of the designs submitted. All
prize designs become the property of the Proprietor oj The
Studio, unless otherwise specified.
(5) No design will be returned in any case unless accom-
panied by sufficient stamps for postage or carriage and pack-
ing. The term “sufficient postage” has been fixed at a
minimum oj 25 cents, to cover the cost of packing, etc., unless
otherwise indicated.
(6) All designs must be sent in packed flat,
UNLESS SPECIALLY EXCEPTED IN CERTAIN COMPETITIONS.
(7) All designs and correspondence thereon to be addressed
The Studio, 44 Leicester Square, London, W. C., and
marked “Prize Competitions,” with the number of the
Competition, “A lxi,” “B lv,” “C xliii,” etc., on the
outside of the package or letter referring to it.
(8) An infringement of any of the above Rules
WILL DISQUALIFY A COMPETITOR.

B 11. A Page from an Architectural Sketch-book.
B in. Sketch from Nature.
Sketches to be made in lead-pencil.
First Prize: Two Guineas; Second Prize: One
Guinea.
Drawings to be received, packed flat, at the London office
of The Studio by December 1.
New Series.
Class C. Photographs from Nature.
C 1. A Harvest Scene.
C 11. Rustic Scene with Figures.
C hi. A Portrait.
All photographs should be sent in mounted upon firm
cards, with a margin not exceeding half-an-inch in depth.
First Prize: One Guinea; Second Prize: Half-a-
Guinea.
Photographs to be received at the London office of The
Studio, 44 Leicester Square, W. C.,by October 1 for New
Series, C 1, November 1 for New Series C n, and December
1 for New Series, C III.