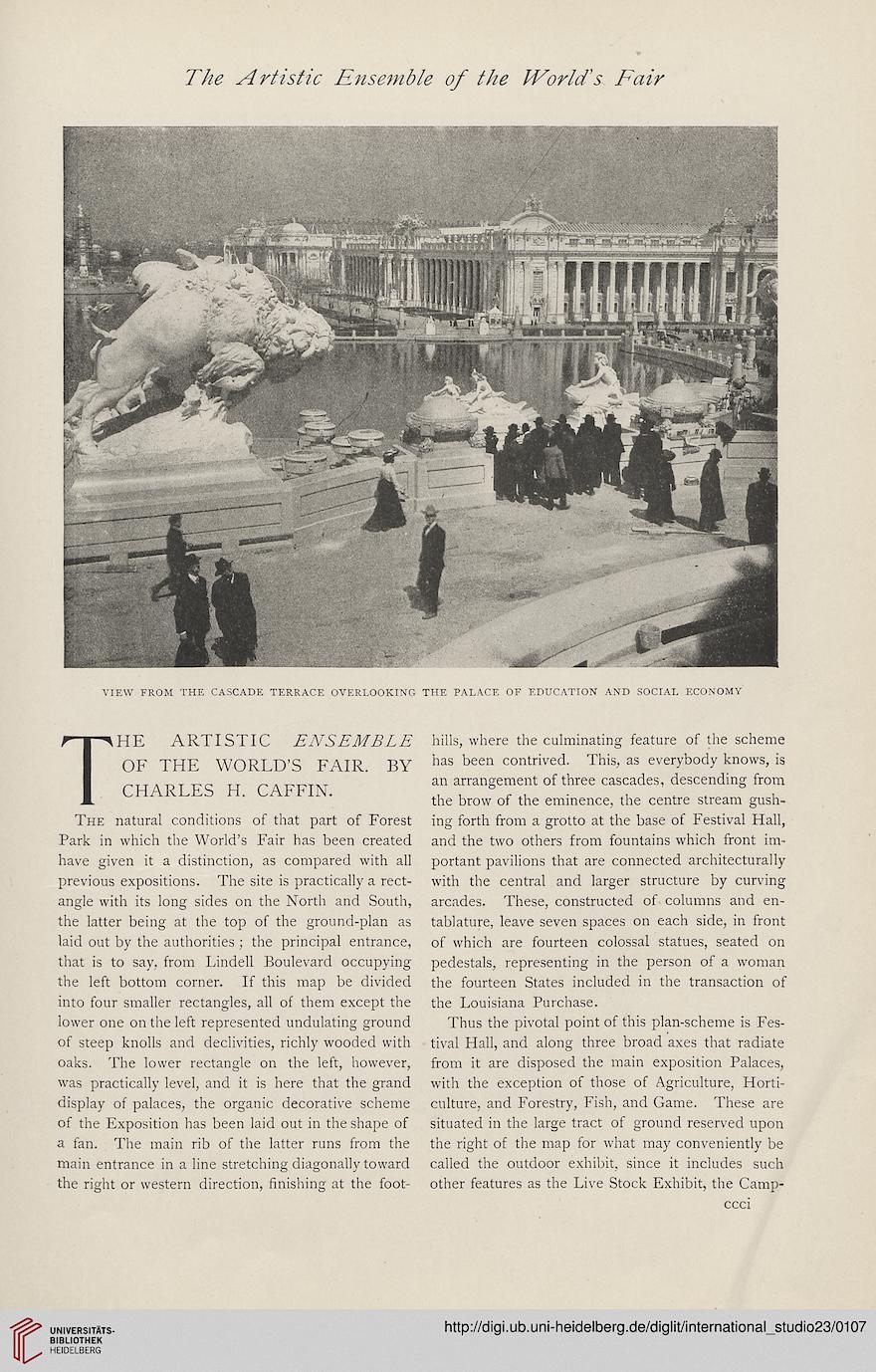 Information about OCR text
The Artistic Ensemble of the World's Fair

The artistic ensemble
OF THE WORLD’S FAIR. BY
CHARLES H. CAFFIN.
The natural conditions of that part of Forest
Park in which the World’s Fair has been created
have given it a distinction, as compared with all
previous expositions. The site is practically a rect-
angle with its long sides on the North and South,
the latter being at the top of the ground-plan as
laid out by the authorities ; the principal entrance,
that is to say. from Lindell Boulevard occupying
the left bottom corner. If this map be divided
into four smaller rectangles, all of them except the
lower one on the left represented undulating ground
of steep knolls and declivities, richly wooded with
oaks. The lower rectangle on the left, however,
was practically level, and it is here that the grand
display of palaces, the organic decorative scheme
of the Exposition has been laid out in the shape of
a fan. The main rib of the latter runs from the
main entrance in a line stretching diagonally toward
the right or western direction, finishing at the foot-

hills, where the culminating feature of the scheme
has been contrived. This, as everybody knows, is
an arrangement of three cascades, descending from
the brow of the eminence, the centre stream gush-
ing forth from a grotto at the base of Festival Hall,
and the two others from fountains which front im-
portant pavilions that are connected architecturally
with the central and larger structure by curving
arcades. These, constructed of columns and en-
tablature, leave seven spaces on each side, in front
of which are fourteen colossal statues, seated on
pedestals, representing in the person of a woman
the fourteen States included in the transaction of
the Louisiana Purchase.
Thus the pivotal point of this plan-scheme is Fes-
tival Hall, and along three broad axes that radiate
from it are disposed the main exposition Palaces,
with the exception of those of Agriculture, Horti-
culture, and Forestry, Fish, and Game. These are
situated in the large tract of ground reserved upon
the right of the map for what may conveniently be
called the outdoor exhibit, since it includes such
other features as the Live Stock Exhibit, the Camp-