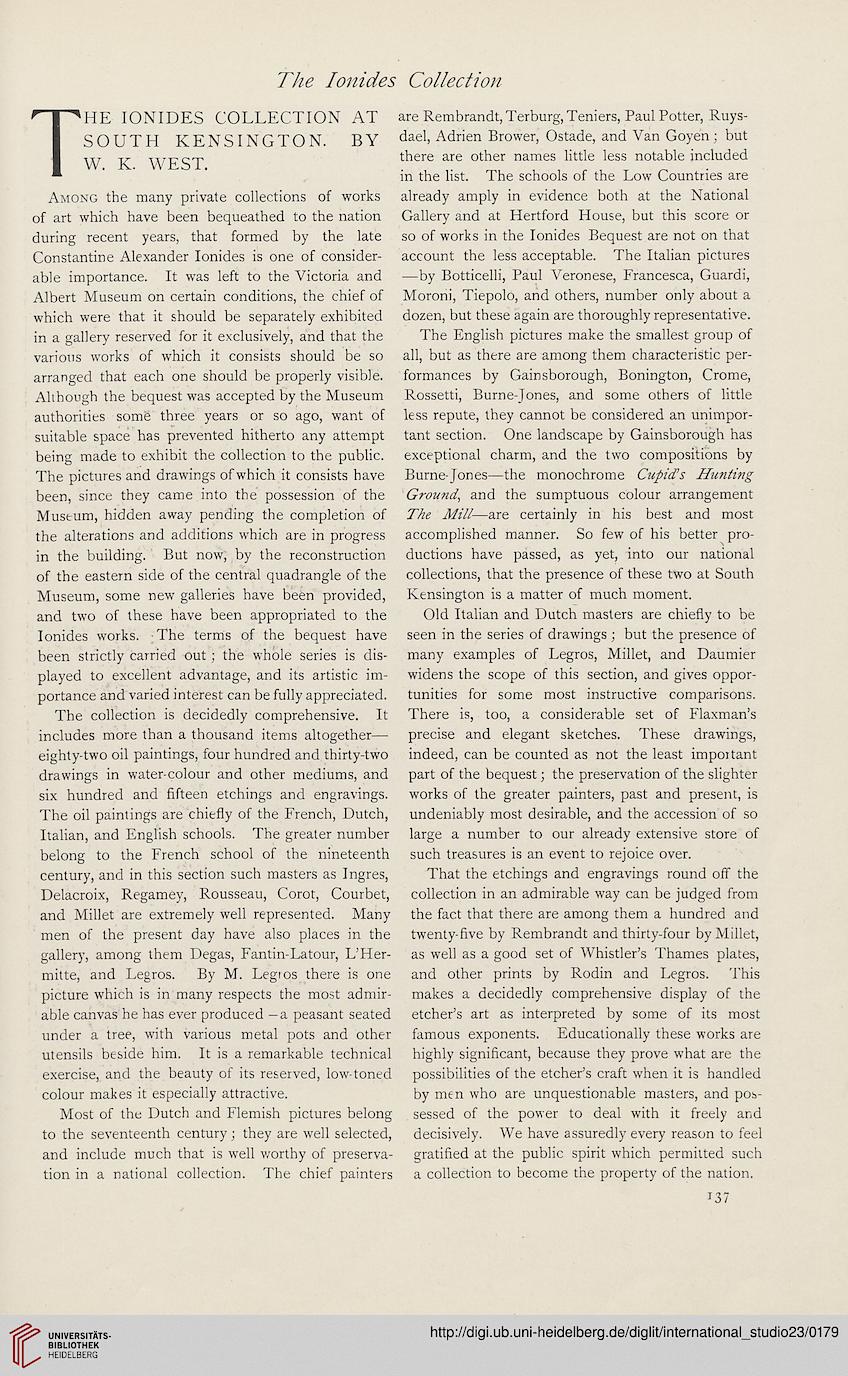 The ionides collection at
SOUTH KENSINGTON. BY
W. K. WEST.
Among the many private collections of works
of art which have been bequeathed to the nation
during recent years, that formed by the late
Constantine Alexander Ionides is one of consider-
able importance. It was left to the Victoria and
Albert Museum on certain conditions, the chief of
which were that it should be separately exhibited
in a gallery reserved for it exclusively, and that the
various works of which it consists should be so
arranged that each one should be properly visible.
Although the bequest was accepted by the Museum
authorities some three years or so ago, want of
suitable space has prevented hitherto any attempt
being made to exhibit the collection to the public.
The pictures and drawings of which it consists have
been, since they came into the possession of the
Museum, hidden away pending the completion of
the alterations and additions which are in progress
in the building. But now, by the reconstruction
of the eastern side of the central quadrangle of the
Museum, some new galleries have been provided,
and two of these have been appropriated to the
Ionides works. The terms of the bequest have
been strictly carried out; the whole series is dis-
played to excellent advantage, and its artistic im-
portance and varied interest can be fully appreciated.
The collection is decidedly comprehensive. It
includes more than a thousand items altogether—
eighty-two oil paintings, four hundred and thirty-two
drawings in water-colour and other mediums, and
six hundred and fifteen etchings and engravings.
The oil paintings are chiefly of the French, Dutch,
Italian, and English schools. The greater number
belong to the French school of the nineteenth
century, and in this section such masters as Ingres,
Delacroix, Regamey, Rousseau, Corot, Courbet,
and Millet are extremely well represented. Many
men of the present day have also places in the
gallery, among them Degas, Fantin-Latour, L’Her-
rnitte, and Legros. By M. Legtos there is one
picture which is in many respects the most admir-
able canvas he has ever produced —a peasant seated
under a tree, with various metal pots and other
utensils beside him. It is a remarkable technical
exercise, and the beauty of its reserved, low-toned
colour makes it especially attractive.
Most of the Dutch and Flemish pictures belong
to the seventeenth century; they are well selected,
and include much that is well worthy of preserva-
tion in a national collection. The chief painters

are Rembrandt, Terburg, Teniers, Paul Potter, Ruys-
dael, Adrien Brower, Ostade, and Van Goyen; but
there are other names little less notable included
in the list. The schools of the Low Countries are
already amply in evidence both at the National
Gallery and at Hertford House, but this score or
so of works in the Ionides Bequest are not on that
account the less acceptable. The Italian pictures
—by Botticelli, Paul Veronese, Francesca, Guardi,
Moroni, Tiepolo, and others, number only about a
dozen, but these again are thoroughly representative.
The English pictures make the smallest group of
all, but as there are among them characteristic per-
formances by Gainsborough, Bonington, Crome,
Rossetti, Burne-Jones, and some others of little
less repute, they cannot be considered an unimpor-
tant section. One landscape by Gainsborough has
exceptional charm, and the two compositions by
Burne-Jones—the monochrome Cupid’s Hunting
Ground, and the sumptuous colour arrangement
The Mill—are certainly in his best and most
accomplished manner. So few of his better pro-
ductions have passed, as yet, into our national
collections, that the presence of these two at South
Kensington is a matter of much moment.
Old Italian and Dutch masters are chiefly to be
seen in the series of drawings ; but the presence of
many examples of Legros, Millet, and Daumier
widens the scope of this section, and gives oppor-
tunities for some most instructive comparisons.
There is, too, a considerable set of Flaxman’s
precise and elegant sketches. These drawings,
indeed, can be counted as not the least important
part of the bequest; the preservation of the slighter
works of the greater painters, past and present, is
undeniably most desirable, and the accession of so
large a number to our already extensive store of
such treasures is an event to rejoice over.
That the etchings and engravings round off the
collection in an admirable way can be judged from
the fact that there are among them a hundred and
twenty-five by Rembrandt and thirty-four by Millet,
as well as a good set of Whistler’s Thames plates,
and other prints by Rodin and Legros. This
makes a decidedly comprehensive display of the
etcher’s art as interpreted by some of its most
famous exponents. Educationally these works are
highly significant, because they prove what are the
possibilities of the etcher’s craft when it is handled
by men who are unquestionable masters, and pos-
sessed of the power to deal with it freely and
decisively. We have assuredly every reason to feel
gratified at the public spirit which permitted such
a collection to become the property of the nation.
137