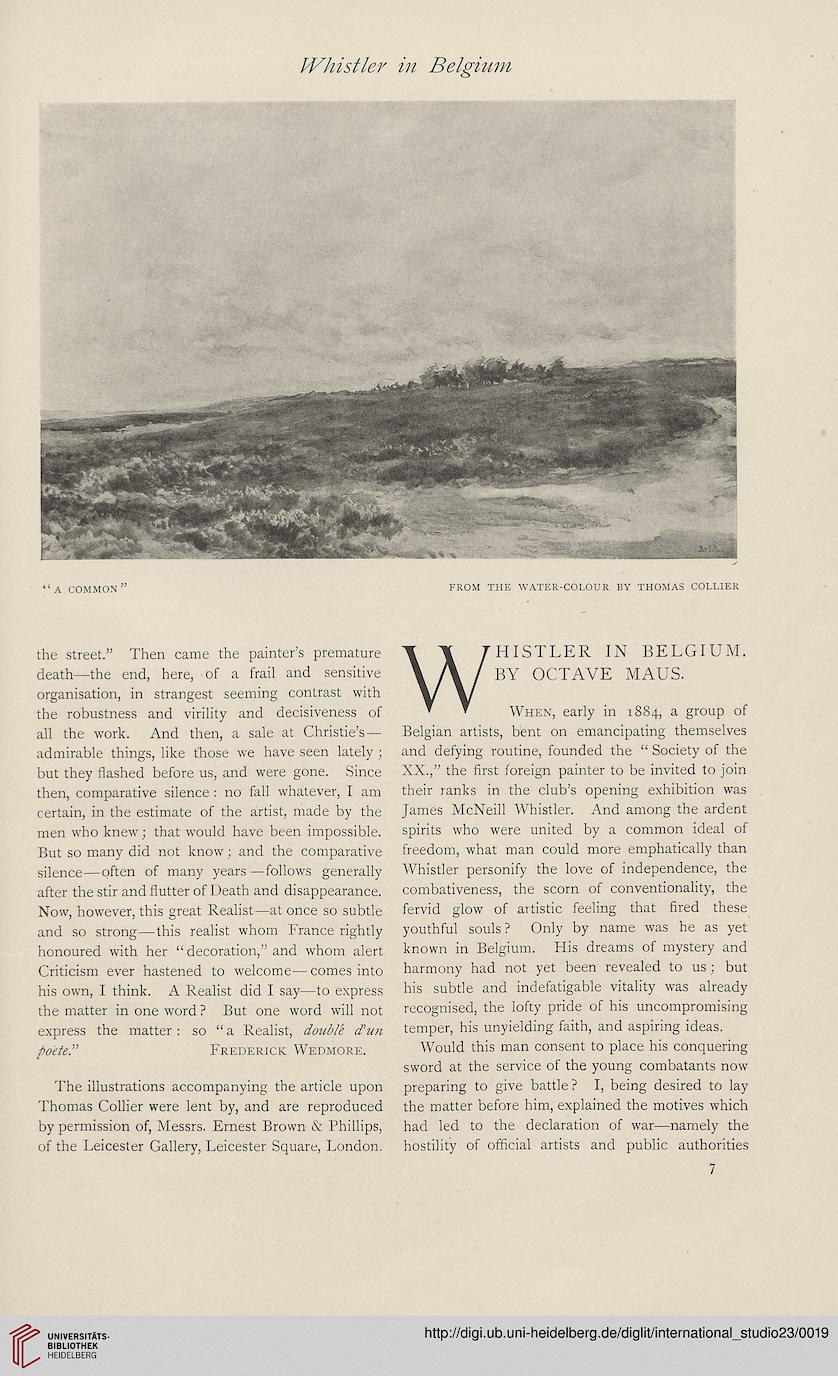 
the street.” Then came the painter’s premature
death—the end, here, of a frail and sensitive
organisation, in strangest seeming contrast with
the robustness and virility and decisiveness of
all the work. And then, a sale at Christie’s —
admirable things, like those we have seen lately ;
but they flashed before us, and were gone. Since
then, comparative silence : no fall whatever, I am
certain, in the estimate of the artist, made by the
men who knew; that would have been impossible.
But so many did not know; and the comparative
silence—often of many years —follows generally
after the stir and flutter of Death and disappearance.
Now, however, this great Realist—at once so subtle
and so strong—this realist whom France rightly
honoured with her “ decoration,” and whom alert
Criticism ever hastened to welcome— comes into
his own, I think. A Realist did I say—to express
the matter in one word ? But one word will not
express the matter: so “ a Realist, double cPu/i
po'ete.” Frederick VVedmore.
The illustrations accompanying the article upon
Thomas Collier were lent by, and are reproduced
by permission of, Messrs. Ernest Brown & Phillips,
of the Leicester Gallery, Leicester Square, London.

WHISTLER IN BELGIUM.
BY OCTAVE MAUS.
When, early in 1884, a group of
Belgian artists, bent on emancipating themselves
and defying routine, founded the “ Society of the
XX.,” the first foreign painter to be invited to join
their ranks in the club’s opening exhibition was
James McNeill Whistler. And among the ardent
spirits who were united by a common ideal of
freedom, what man could more emphatically than
Whistler personify the love of independence, the
combativeness, the scorn of conventionality, the
fervid glow of artistic feeling that fired these
youthful souls ? Only by name was he as yet
known in Belgium. His dreams of mystery and
harmony had not yet been revealed to us; but
his subtle and indefatigable vitality was already
recognised, the lofty pride of his uncompromising
temper, his unyielding faith, and aspiring ideas.
Would this man consent to place his conquering
sword at the service of the young combatants now
preparing to give battle? I, being desired to lay
the matter before him, explained the motives which
had led to the declaration of war—namely the
hostility of official artists and public authorities
7