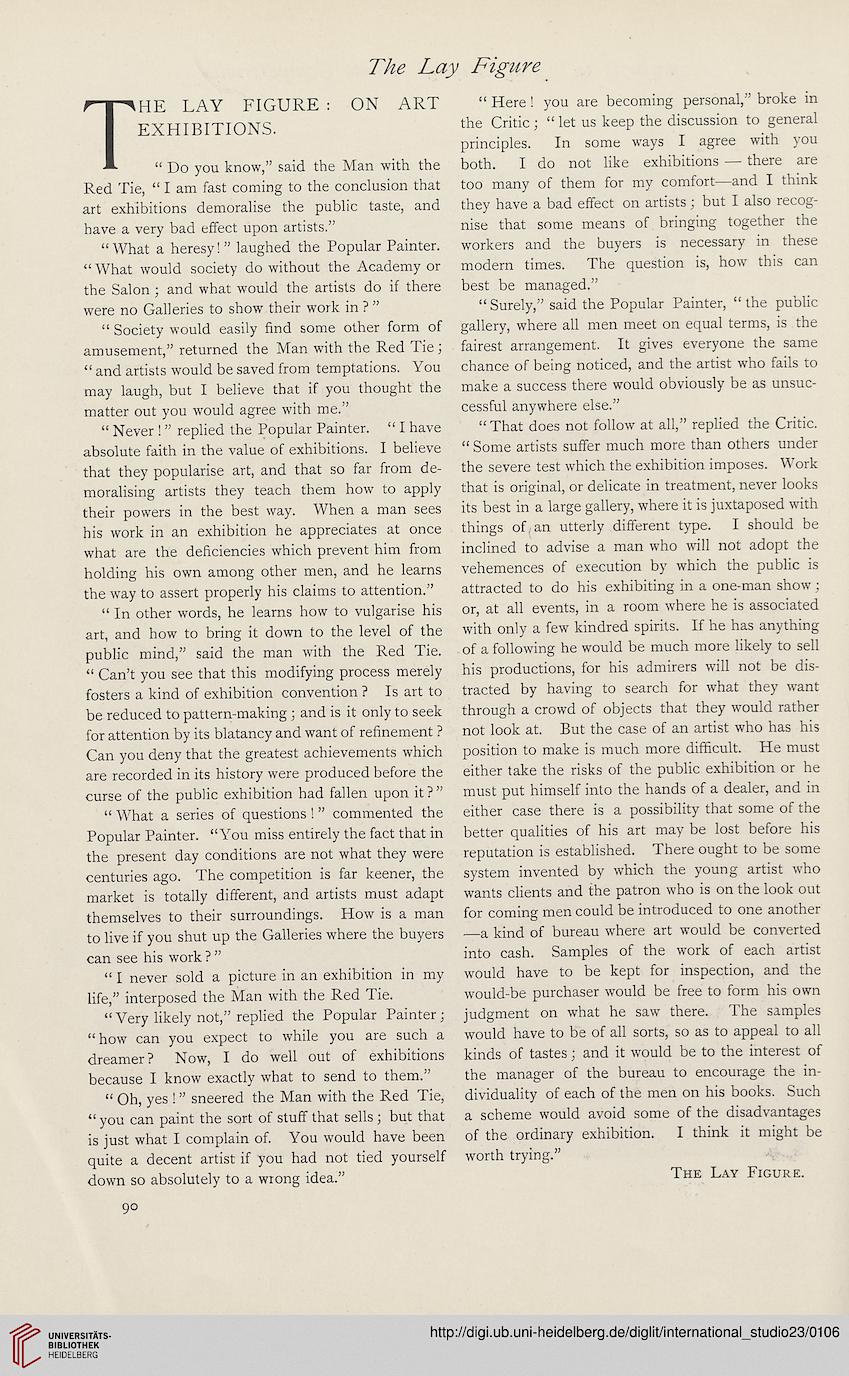 The lay figure = on art
EXHIBITIONS.
“ Do you know,” said the Man with the
Red Tie, “ I am fast coming to the conclusion that
art exhibitions demoralise the public taste, and
have a very bad effect upon artists.”
“What a heresy!” laughed the Popular Painter.
“ What would society do without the Academy or
the Salon ; and what would the artists do if there
were no Galleries to show their work in ? ”
“ Society would easily find some other form of
amusement,” returned the Man with the Red Tie;
“ and artists would be saved from temptations. You
may laugh, but I believe that if you thought the
matter out you would agree with me.”
“ Never ! ” replied the Popular Painter. “ I have
absolute faith in the value of exhibitions. I believe
that they popularise art, and that so far from de-
moralising artists they teach them how to apply
their powers in the best way. When a man sees
his work in an exhibition he appreciates at once
what are the deficiencies which prevent him from
holding his own among other men, and he learns
the way to assert properly his claims to attention.”
“ In other words, he learns how to vulgarise his
art, and how to bring it down to the level of the
public mind,” said the man with the Red Tie.
“ Can’t you see that this modifying process merely
fosters a kind of exhibition convention ? Is art to
be reduced to pattern-making; and is it only to seek
for attention by its blatancy and want of refinement ?
Can you deny that the greatest achievements which
are recorded in its history were produced before the
curse of the public exhibition had fallen upon it ? ”
“ What a series of questions 1 ” commented the
Popular Painter. “You miss entirely the fact that in
the present day conditions are not what they were
centuries ago. The competition is far keener, the
market is totally different, and artists must adapt
themselves to their surroundings. How is a man
to live if you shut up the Galleries where the buyers
can see his work ? ”
“ I never sold a picture in an exhibition in my
life,” interposed the Man -with the Red Tie.
“Very likely not,” replied the Popular Painter;
“ how can you expect to while you are such a
dreamer? Now, I do well out of exhibitions
because I know exactly what to send to them.”
“ Oh, yes 1 ” sneered the Man with the Red Tie,
“ you can paint the sort of stuff that sells; but that
is just what I complain of. You would have been
quite a decent artist if you had not tied yourself
down so absolutely to a wrong idea.”

“ Here! you are becoming personal,” broke in
the Critic; “let us keep the discussion to general
principles. In some ways I agree with you
both. I do not like exhibitions — there are
too many of them for my comfort—and I think
they have a bad effect on artists; but I also recog-
nise that some means of bringing together the
workers and the buyers is necessary in these
modern times. The question is, how this can
best be managed.”
“Surely,” said the Popular Painter, “the public
gallery, where all men meet on equal terms, is the
fairest arrangement. It gives everyone the same
chance of being noticed, and the artist who fails to
make a success there would obviously be as unsuc-
cessful anywhere else.”
“ That does not follow at all,” replied the Critic.
“ Some artists suffer much more than others under
the severe test which the exhibition imposes. Work
that is original, or delicate in treatment, never looks
its best in a large gallery, where it is juxtaposed with
things of an utterly different type. I should be
inclined to advise a man who will not adopt the
vehemences of execution by which the public is
attracted to do his exhibiting in a one-man show;
or, at all events, in a room where he is associated
with only a few kindred spirits. If he has anything
of a following he would be much more likely to sell
his productions, for his admirers will not be dis-
tracted by having to search for what they want
through a crowd of objects that they would rather
not look at. But the case of an artist who has his
position to make is much more difficult. He must
either take the risks of the public exhibition or he
must put himself into the hands of a dealer, and in
either case there is a possibility that some of the
better qualities of his art may be lost before his
reputation is established. There ought to be some
system invented by which the young artist who
wants clients and the patron who is on the look out
for coming men could be introduced to one another
-—a kind of bureau where art would be converted
into cash. Samples of the work of each artist
would have to be kept for inspection, and the
would-be purchaser would be free to form his own
judgment on what he saw there. The samples
would have to be of all sorts, so as to appeal to all
kinds of tastes; and it would be to the interest of
the manager of the bureau to encourage the in-
dividuality of each of the men on his books. Such
a scheme would avoid some of the disadvantages
of the ordinary exhibition. I think it might be
worth trying.”
The Lay Figure.