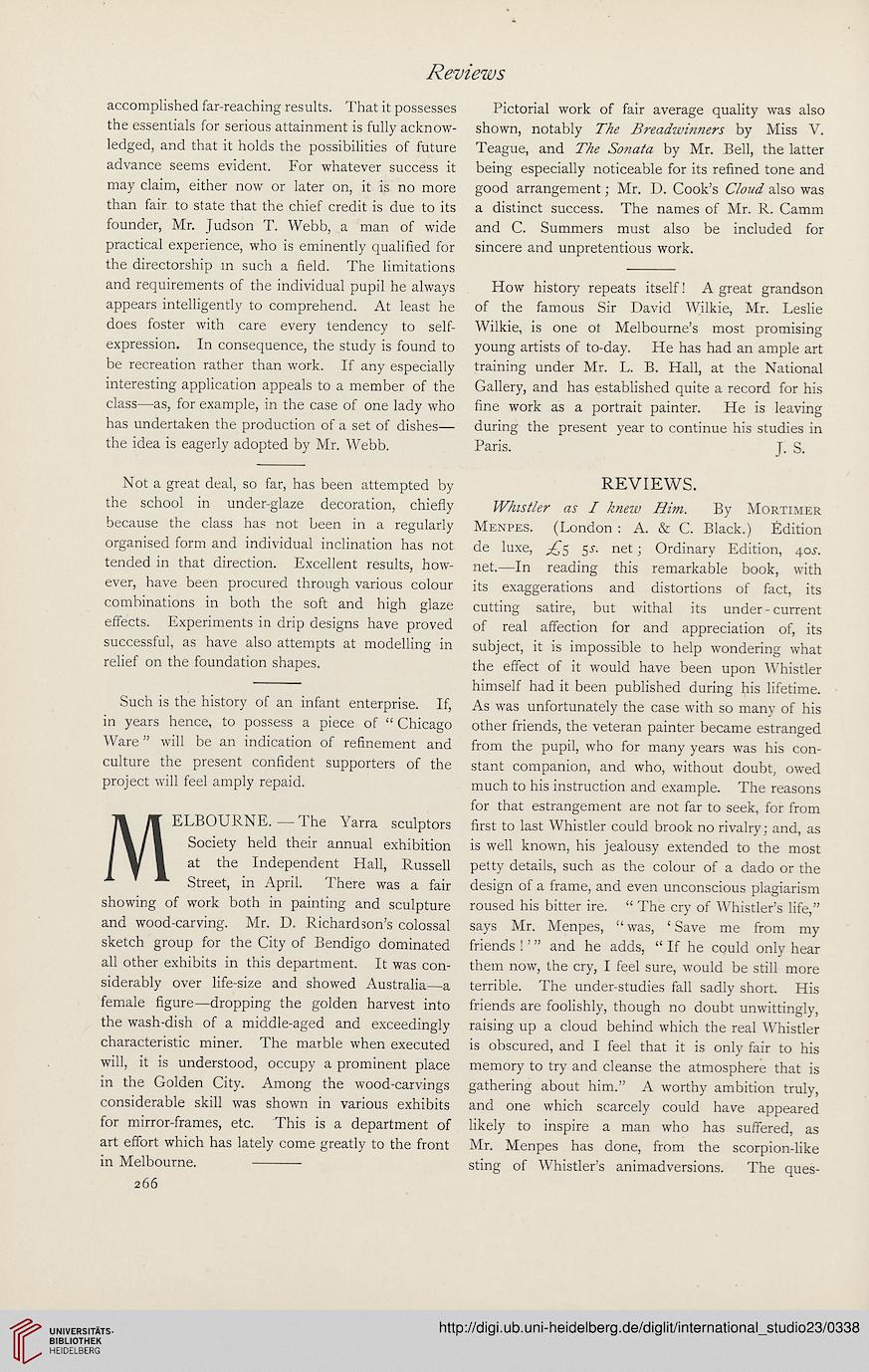 accomplished far-reaching results. That it possesses
the essentials for serious attainment is fully acknow-
ledged, and that it holds the possibilities of future
advance seems evident. For whatever success it
may claim, either now or later on, it is no more
than fair to state that the chief credit is due to its
founder, Mr. Judson T. Webb, a man of wide
practical experience, who is eminently qualified for
the directorship in such a field. The limitations
and requirements of the individual pupil he always
appears intelligently to comprehend. At least he
does foster with care every tendency to self-
expression. In consequence, the study is found to
be recreation rather than work. If any especially
interesting application appeals to a member of the
class—as, for example, in the case of one lady who
has undertaken the production of a set of dishes—
the idea is eagerly adopted by Mr. Webb.

Not a great deal, so far, has been attempted by
the school in under-glaze decoration, chiefly
because the class has not been in a regularly
organised form and individual inclination has not
tended in that direction. Excellent results, how-
ever, have been procured through various colour
combinations in both the soft and high glaze
effects. Experiments in drip designs have proved
successful, as have also attempts at modelling in
relief on the foundation shapes.
Such is the history of an infant enterprise. If,
in years hence, to possess a piece of “ Chicago
Ware ” will be an indication of refinement and
culture the present confident supporters of the
project will feel amply repaid.
MELBOURNE. — The Yarra sculptors
Society held their annual exhibition
at the Independent Hall, Russell
Street, in April. There was a fair
showing of work both in painting and sculpture
and wood-carving. Mr. D. Richardson’s colossal
sketch group for the City of Bendigo dominated
all other exhibits in this department. It was con-
siderably over life-size and showed Australia—a
female figure—dropping the golden harvest into
the wash-dish of a middle-aged and exceedingly
characteristic miner. The marble when executed
will, it is understood, occupy a prominent place
in the Golden City. Among the wood-carvings
considerable skill was shown in various exhibits
for mirror-frames, etc. This is a department of
art effort which has lately come greatly to the front
in Melbourne. -

Pictorial work of fair average quality was also
shown, notably The Breadwinners by Miss V.
Teague, and The Sonata by Mr. Bell, the latter
being especially noticeable for its refined tone and
good arrangement; Mr. D. Cook’s Cloud also was
a distinct success. The names of Mr. R. Camm
and C. Summers must also be included for
sincere and unpretentious work.

How history repeats itself! A great grandson
of the famous Sir David Wilkie, Mr. Leslie
Wilkie, is one ot Melbourne’s most promising
young artists of to-day. He has had an ample art
training under Mr. L. B. Hall, at the National
Gallery, and has established quite a record for his
fine work as a portrait painter. He is leaving
during the present year to continue his studies in
Paris. J. S.
REVIEWS.
Whistler as I knew Him. By Mortimer
Menpes. (London : A. & C. Black.) Edition
de luxe, ^5 5r. net; Ordinary Edition, 405.
net.—In reading this remarkable book, with
its exaggerations and distortions of fact, its
cutting satire, but withal its under-current
of real affection for and appreciation of, its
subject, it is impossible to help wondering what
the effect of it would have been upon Whistler
himself had it been published during his lifetime.
As was unfortunately the case with so many of his
other friends, the veteran painter became estranged
from the pupil, who for many years was his con-
stant companion, and who, without doubt, owed
much to his instruction and example. The reasons
for that estrangement are not far to seek, for from
first to last Whistler could brook no rivalry; and, as
is well known, his jealousy extended to the most
petty details, such as the colour of a dado or the
design of a frame, and even unconscious plagiarism
roused his bitter ire. “ The cry of Whistler’s life,”
says Mr. Menpes, “ was, ‘ Save me from my
friends ! ’ ” and he adds, “ If he could only hear
them now, the cry, I feel sure, would be still more
terrible. The under-studies fall sadly short. His
friends are foolishly, though no doubt unwittingly,
raising up a cloud behind which the real Whistler
is obscured, and I feel that it is only fair to his
memory to try and cleanse the atmosphere that is
gathering about him.” A worthy ambition truly,
and one which scarcely could have appeared
likely to inspire a man who has suffered, as
Mr. Menpes has done, from the scorpion-like
sting of Whistler’s animadversions. The ques-