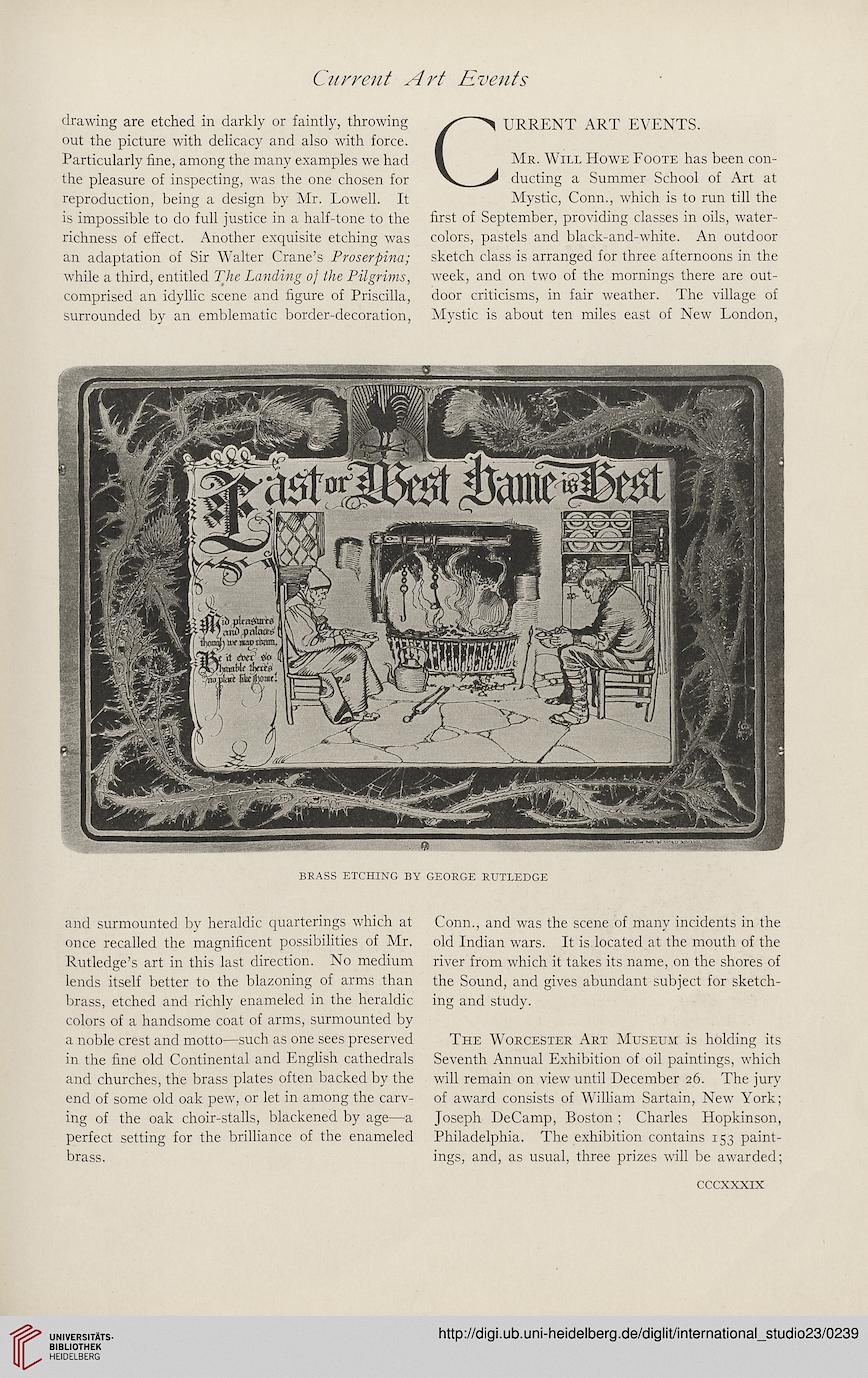 drawing are etched in darkly or faintly, throwing
out the picture with delicacy and also with force.
Particularly fine, among the many examples we had
the pleasure of inspecting, was the one chosen for
reproduction, being a design by Mr. Lowell. It
is impossible to do full justice in a half-tone to the
richness of effect. Another exquisite etching was
an adaptation of Sir Walter Crane’s Proserpina;
while a third, entitled The Landing oj the Pilgrims,
comprised an idyllic scene and figure of Priscilla,
surrounded by an emblematic border-decoration,

CURRENT ART EVENTS.
Mr. Will Howe Foote has been con-
ducting a Summer School of Art at

Mystic, Conn., which is to run till the
first of September, providing classes in oils, water-
colors, pastels and black-and-white. An outdoor
sketch class is arranged for three afternoons in the
week, and on two of the mornings there are out-
door criticisms, in fair weather. The village of
Mystic is about ten miles east of New London,

and surmounted by heraldic quarterings which at
once recalled the magnificent possibilities of Mr.
Rutledge’s art in this last direction. No medium
lends itself better to the blazoning of arms than
brass, etched and richly enameled in the heraldic
colors of a handsome coat of arms, surmounted by
a noble crest and motto—such as one sees preserved
in the fine old Continental and English cathedrals
and churches, the brass plates often backed by the
end of some old oak pew, or let in among the carv-
ing of the oak choir-stalls, blackened by age—a
perfect setting for the brilliance of the enameled
brass.

Conn., and was the scene of many incidents in the
old Indian wars. It is located at the mouth of the
river from which it takes its name, on the shores of
the Sound, and gives abundant subject for sketch-
ing and study.
The Worcester Art Museum is holding its
Seventh Annual Exhibition of oil paintings, which
will remain on view until December 26. The jury
of award consists of William Sartain, New York;
Joseph DeCamp, Boston; Charles Hopkinson,
Philadelphia. The exhibition contains 153 paint-
ings, and, as usual, three prizes will be awarded;