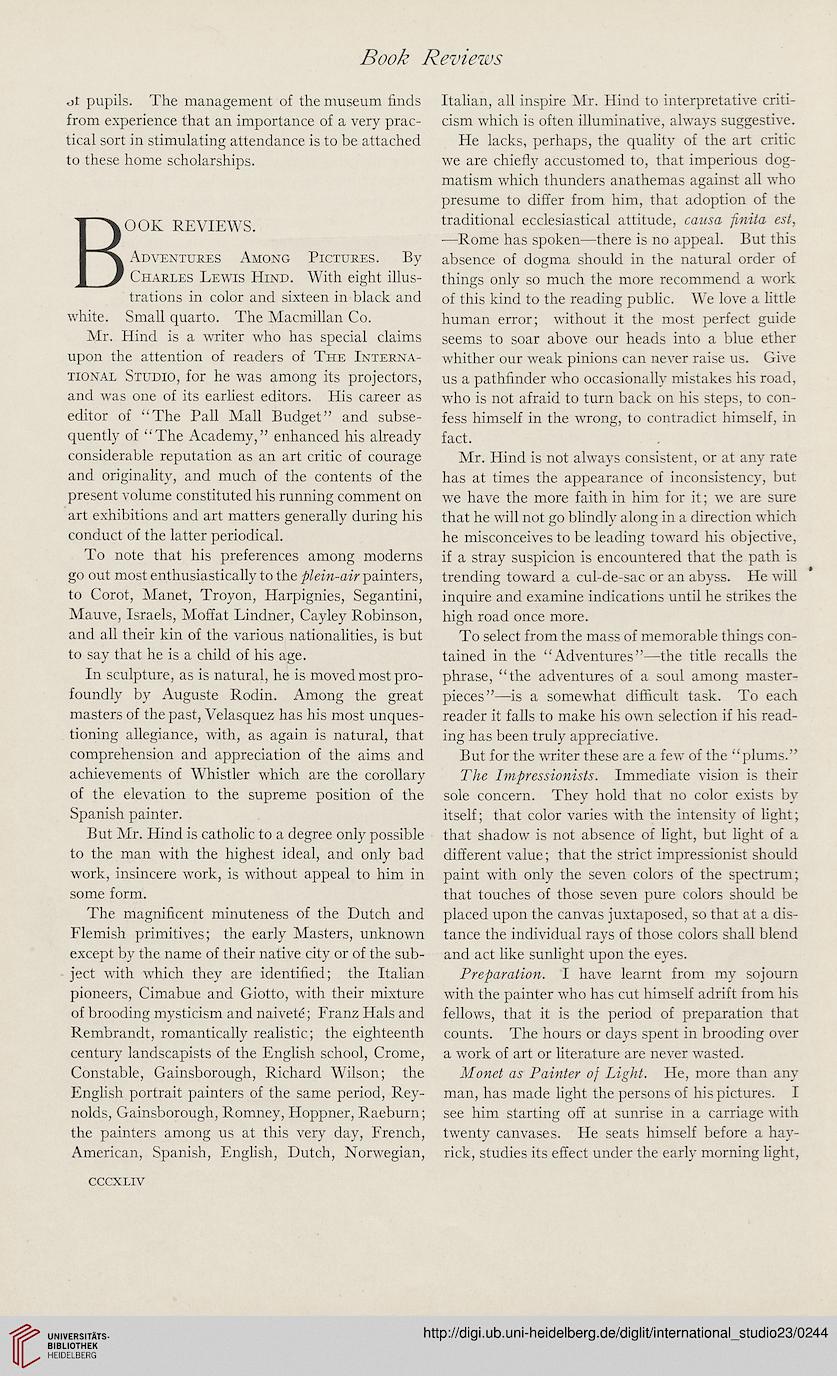 ot pupils. The management of the museum finds
from experience that an importance of a very prac-
tical sort in stimulating attendance is to be attached
to these home scholarships.

OOK REVIEWS.
Adventures Among Pictures. By
Charles Lewis Hind. With eight illus-
trations in color and sixteen in black and
white. Small quarto. The Macmillan Co.
Mr. Hind is a writer who has special claims
upon the attention of readers of Ti-ie Interna-
tional Studio, for he was among its projectors,
and was one of its earliest editors. His career as
editor of “The Pall Mall Budget” and subse-
quently of “The Academy,” enhanced his already
considerable reputation as an art critic of courage
and originality, and much of the contents of the
present volume constituted his running comment on
art exhibitions and art matters generally during his
conduct of the latter periodical.
To note that his preferences among moderns
go out most enthusiastically to the plein-air painters,
to Corot, Manet, Troyon, Harpignies, Segantini,
Mauve, Israels, Moffat Lindner, Cayley Robinson,
and all their kin of the various nationalities, is but
to say that he is a child of his age.
In sculpture, as is natural, he is moved most pro-
foundly by Auguste Rodin. Among the great
masters of the past, Velasquez has his most unques-
tioning allegiance, with, as again is natural, that
comprehension and appreciation of the aims and
achievements of Whistler which are the corollary
of the elevation to the supreme position of the
Spanish painter.
But Mr. Hind is catholic to a degree only possible
to the man with the highest ideal, and only bad
work, insincere work, is without appeal to him in
some form.
The magnificent minuteness of the Dutch and
Flemish primitives; the early Masters, unknown
except by the name of their native city or of the sub-
ject with which they are identified; the Italian
pioneers, Cimabue and Giotto, with their mixture
of brooding mysticism and naivete; Franz Hals and
Rembrandt, romantically realistic; the eighteenth
century landscapists of the English school, Crome,
Constable, Gainsborough, Richard Wilson; the
English portrait painters of the same period, Rey-
nolds, Gainsborough, Romney, Hoppner, Raeburn;
the painters among us at this very day, French,
American, Spanish, English, Dutch, Norwegian,

Italian, all inspire Mr. Hind to interpretative criti-
cism which is often illuminative, always suggestive.
He lacks, perhaps, the quality of the art critic
we are chiefly accustomed to, that imperious dog-
matism which thunders anathemas against all who
presume to differ from him, that adoption of the
traditional ecclesiastical attitude, causa finita est,
—Rome has spoken—there is no appeal. But this
absence of dogma should in the natural order of
things only so much the more recommend a work
of this kind to the reading public. We love a little
human error; without it the most perfect guide
seems to soar above our heads into a blue ether
whither our weak pinions can never raise us. Give
us a pathfinder who occasionally mistakes his road,
who is not afraid to turn back on his steps, to con-
fess himself in the wrong, to contradict himself, in
fact.
Mr. Hind is not always consistent, or at any rate
has at times the appearance of inconsistency, but
we have the more faith in him for it; we are sure
that he will not go blindly along in a direction which
he misconceives to be leading toward his objective,
if a stray suspicion is encountered that the path is
trending toward a cul-de-sac or an abyss. He will
inquire and examine indications until he strikes the
high road once more.
To select from the mass of memorable things con-
tained in the “Adventures”—the title recalls the
phrase, “the adventures of a soul among master-
pieces”—is a somewhat difficult task. To each
reader it falls to make his own selection if his read-
ing has been truly appreciative.
But for the writer these are a few of the “plums.”
The Impressionists. Immediate vision is their
sole concern. They hold that no color exists by
itself; that color varies with the intensity of light;
that shadow is not absence of light, but light of a
different value; that the strict impressionist should
paint with only the seven colors of the spectrum;
that touches of those seven pure colors should be
placed upon the canvas juxtaposed, so that at a dis-
tance the individual rays of those colors shall blend
and act like sunlight upon the eyes.
Preparation. I have learnt from my sojourn
with the painter who has cut himself adrift from his
fellows, that it is the period of preparation that
counts. The hours or days spent in brooding over
a work of art or literature are never wasted.
Monet as Painter of Light. He, more than any
man, has made light the persons of his pictures. I
see him starting off at sunrise in a carriage with
twenty canvases. He seats himself before a hay-
rick, studies its effect under the early morning light,