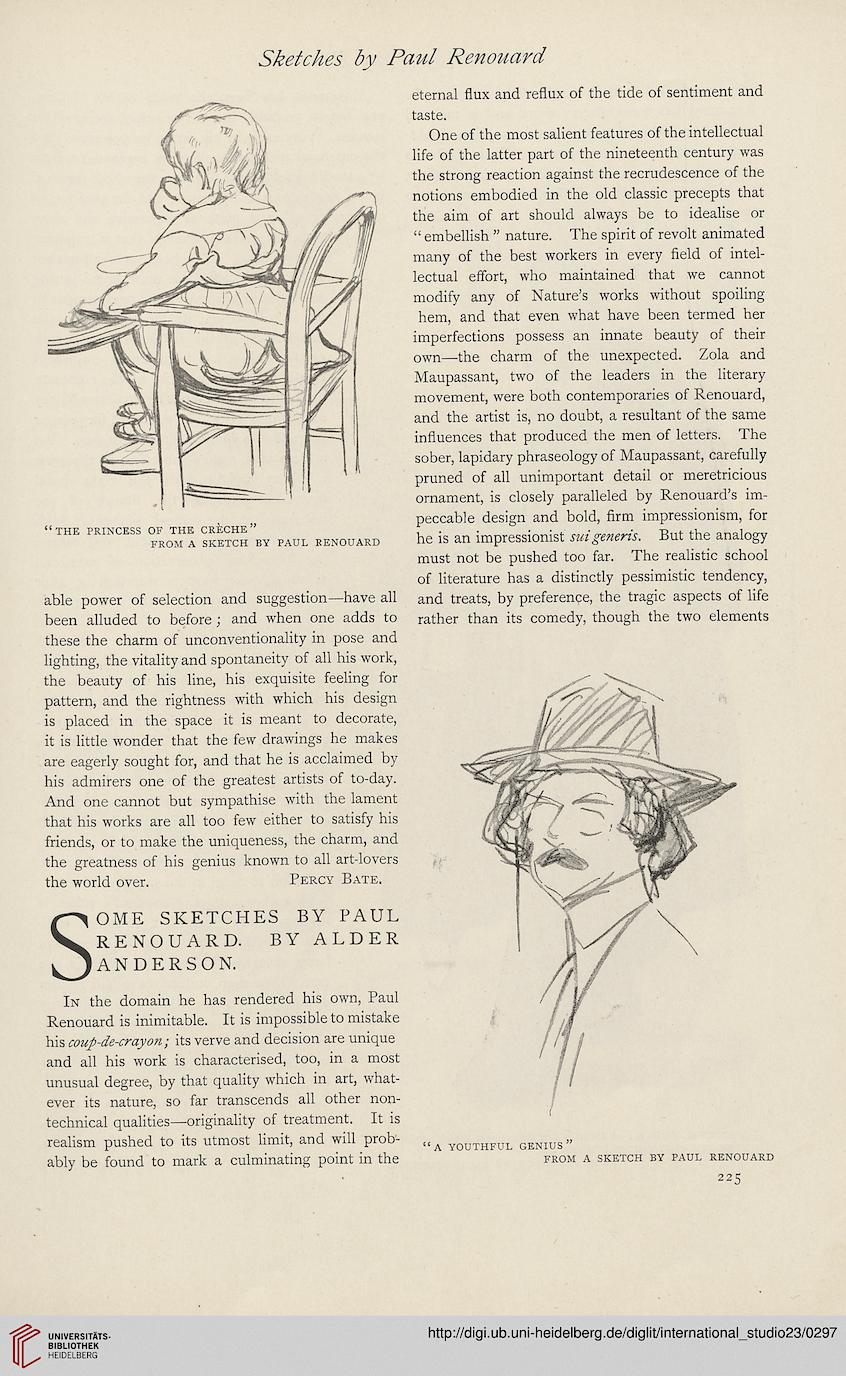 
“THE PRINCESS OF THE CRECHE”
FROM A SKETCH BY PAUL RENOUARD

able power of selection and suggestion—have all
been alluded to before; and when one adds to
these the charm of unconventionality in pose and
lighting, the vitality and spontaneity of all his work,
the beauty of his line, his exquisite feeling for
pattern, and the rightness with which his design
is placed in the space it is meant to decorate,
it is little wonder that the few drawings he makes
are eagerly sought for, and that he is acclaimed by
his admirers one of the greatest artists of to-day.
And one cannot but sympathise with the lament
that his works are all too few either to satisfy his
friends, or to make the uniqueness, the charm, and
the greatness of his genius known to all art-lovers
the world over. Percy Bate.
OME SKETCHES BY PAUL
RENOUARD. BY ALDER
ANDERSON.
In the domain he has rendered his own, Paul
Renouard is inimitable. It is impossible to mistake
his coup-de-crayo?i; its verve and decision are unique
and all his work is characterised, too, in a most
unusual degree, by that quality which in art, what-
ever its nature, so far transcends all other non-
technical qualities—originality of treatment. It is
realism pushed to its utmost limit, and will prob-
ably be found to mark a culminating point in the

eternal flux and reflux of the tide of sentiment and
taste.
One of the most salient features of the intellectual
life of the latter part of the nineteenth century was
the strong reaction against the recrudescence of the
notions embodied in the old classic precepts that
the aim of art should always be to idealise or
“ embellish ” nature. The spirit of revolt animated
many of the best workers in every field of intel-
lectual effort, who maintained that we cannot
modify any of Nature’s works without spoiling
hem, and that even what have been termed her
imperfections possess an innate beauty of their
own—the charm of the unexpected. Zola and
Maupassant, two of the leaders in the literary
movement, were both contemporaries of Renouard,
and the artist is, no doubt, a resultant of the same
influences that produced the men of letters. The
sober, lapidary phraseology of Maupassant, carefully
pruned of all unimportant detail or meretricious
ornament, is closely paralleled by Renouard’s im-
peccable design and bold, firm impressionism, for
he is an impressionist suigeneris. But the analogy
must not be pushed too far. The realistic school
of literature has a distinctly pessimistic tendency,
and treats, by preference, the tragic aspects of life
rather than its comedy, though the two elements


FROM A SKETCH BY PAUL RENOUARD
225