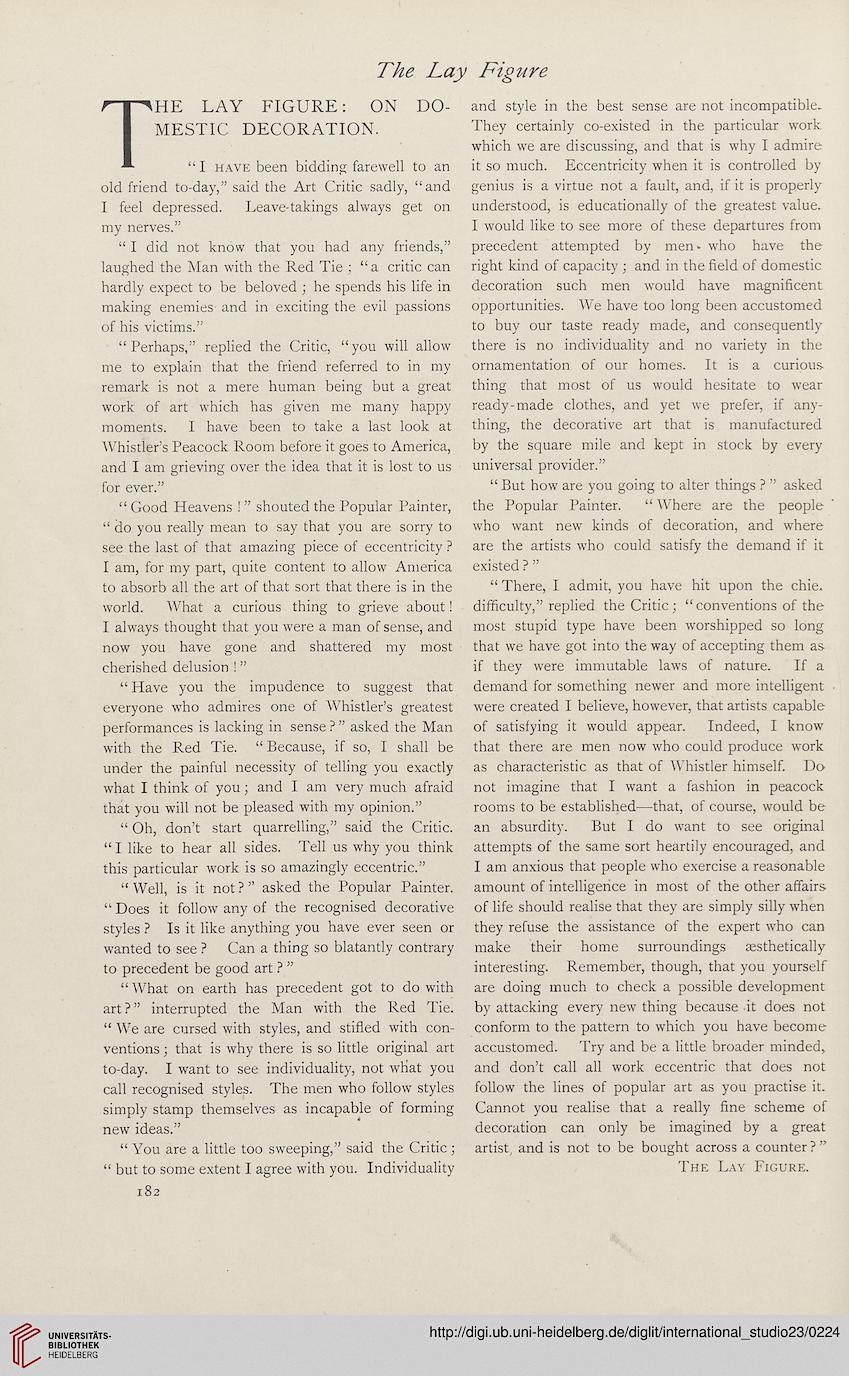 Information about OCR text
The Lay
HE LAY FIGURE: ON DO-
MESTIC DECORATION.
“I have been bidding farewell to an
old friend to-day,” said the Art Critic sadly, “and
I feel depressed. Leave-takings always get on
my nerves.”
“ I did not know that you had any friends,”
laughed the Man with the Red Tie ; “a critic can
hardly expect to be beloved ; he spends his life in
making enemies and in exciting the evil passions
of his victims.”
“Perhaps,” replied the Critic, “you will allow
me to explain that the friend referred to in my
remark is not a mere human being but a great
work of art which has given me many happy
moments. I have been to take a last look at
Whistler’s Peacock Room before it goes to America,
and I am grieving over the idea that it is lost to us
for ever.”
“ Good Heavens ! ” shouted the Popular Painter,
“ do you really mean to say that you are sorry to
see the last of that amazing piece of eccentricity ?
I am, for my part, quite content to allow America
to absorb all the art of that sort that there is in the
world. What a curious thing to grieve about!
I always thought that you were a man of sense, and
now you have gone and shattered my most
cherished delusion ! ”
“ Have you the impudence to suggest that
everyone who admires one of Whistler’s greatest
performances is lacking in sense ? ” asked the Man
with the Red Tie. “Because, if so, I shall be
under the painful necessity of telling you exactly
what I think of you; and I am very much afraid
that you will not be pleased with my opinion.”
“ Oh, don’t start quarrelling,” said the Critic.
“I like to hear all sides. Tell us why you think
this particular work is so amazingly eccentric.”
“ Well, is it not ? ” asked the Popular Painter.
“ Does it follow any of the recognised decorative
styles ? Is it like anything you have ever seen or
wanted to see ? Can a thing so blatantly contrary
to precedent be good art ? ”
“ What on earth has precedent got to do with
art ? ” interrupted the Man with the Red Tie.
“ We are cursed with styles, and stifled with con-
ventions ; that is why there is so little original art
to-day. I want to see individuality, not wHat you
call recognised styles. The men who follow styles
simply stamp themselves as incapable of forming
new ideas.”
“ You are a little too sweeping,” said the Critic ;
“ but to some extent I agree with you. Individuality
182

Figure
and style in the best sense are not incompatible.
They certainly co-existed in the particular w7ork
which we are discussing, and that is why I admire
it so much. Eccentricity when it is controlled by
genius is a virtue not a fault, and, if it is properly
understood, is educationally of the greatest value.
I would like to see more of these departures from
precedent attempted by men- who have the
right kind of capacity; and in the field of domestic
decoration such men would have magnificent
opportunities. We have too long been accustomed
to buy our taste ready made, and consequently
there is no individuality and no variety in the
ornamentation of our homes. It is a curious
thing that most of us would hesitate to wear
ready-made clothes, and yet we prefer, if any-
thing, the decorative art that is manufactured
by the square mile and kept in stock by every
universal provider.”
“ But how are you going to alter things ? ” asked
the Popular Painter. “ Where are the people
who want new kinds of decoration, and where
are the artists who could satisfy the demand if it
existed ? ”
“ There, I admit, you have hit upon the chie.
difficulty,” replied the Critic; “ conventions of the
most stupid type have been worshipped so long
that we have got into the way of accepting them as
if they were immutable laws of nature. If a
demand for something newer and more intelligent
were created I believe, however, that artists capable
of satisfying it would appear. Indeed, I know
that there are men now who could produce work
as characteristic as that of Whistler himself. Do
not imagine that I want a fashion in peacock
rooms to be established—that, of course, would be
an absurdity. But I do want to see original
attempts of the same sort heartily encouraged, and
I am anxious that people who exercise a reasonable
amount of intelligence in most of the other affairs
of life should realise that they are simply silly when
they refuse the assistance of the expert who can
make their home surroundings aesthetically
interesting. Remember, though, that you yourself
are doing much to check a possible development
by attacking every new thing because it does not
conform to the pattern to which you have become
accustomed. Try and be a little broader minded,
and don’t call all work eccentric that does not
follow the lines of popular art as you practise it.
Cannot you realise that a really fine scheme of
decoration can only be imagined by a great
artist, and is not to be bought across a counter ? ”
The Lay Figure.