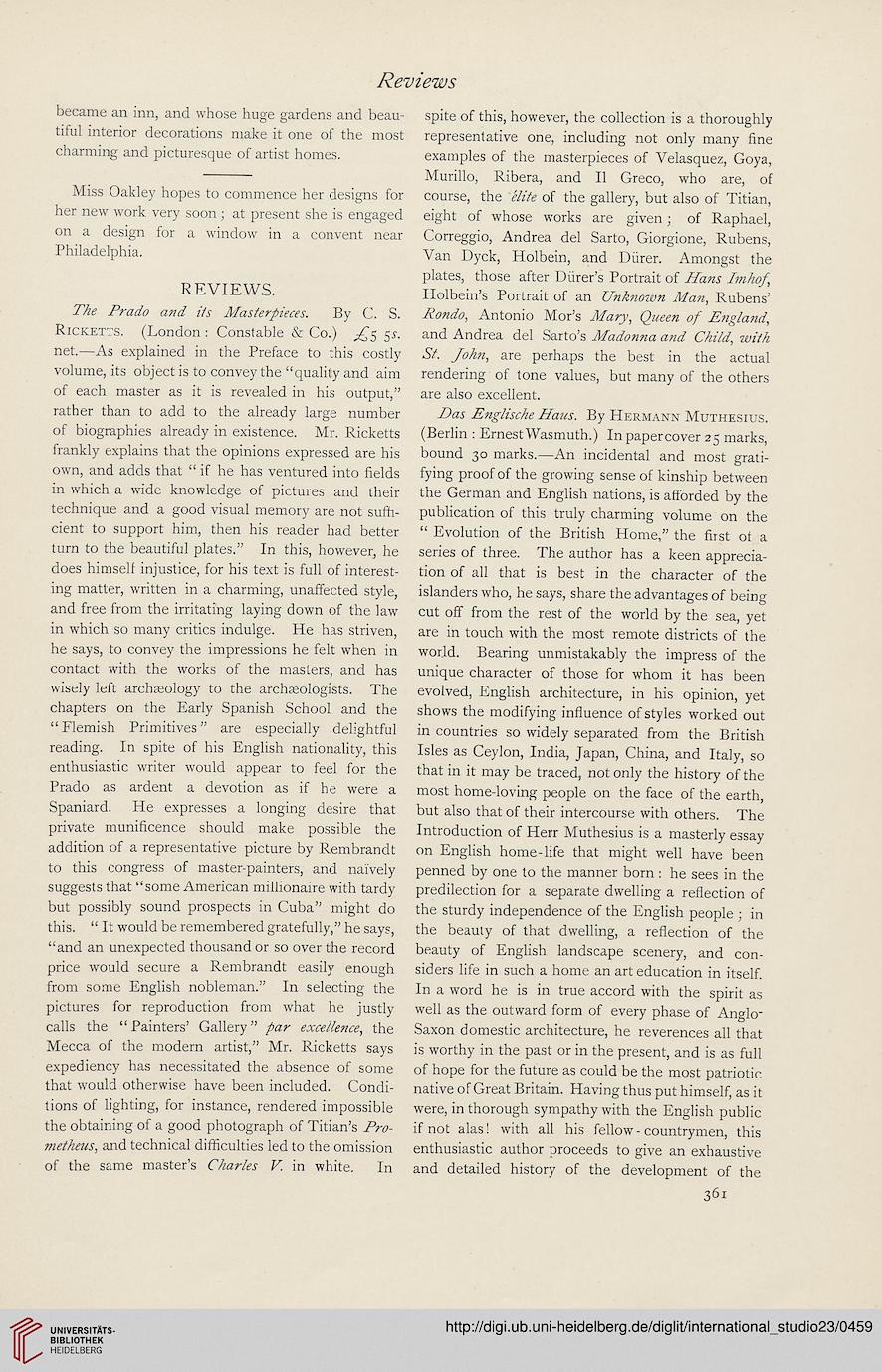 became an inn, and whose huge gardens and beau-
tiful interior decorations make it one of the most
charming and picturesque of artist homes.
Miss Oakley hopes to commence her designs for
her new work very soon; at present she is engaged
on a design for a window in a convent near
Philadelphia.
REVIEWS.
The Prado and i/s Masterpieces. By C. S.
Ricketts. (London : Constable & Co.) $s.
net.—As explained in the Preface to this costly
volume, its object is to convey the “quality and aim
of each master as it is revealed in his output,”
rather than to add to the already large number
of biographies already in existence. Mr. Ricketts
frankly explains that the opinions expressed are his
own, and adds that “ if he has ventured into fields
in which a wide knowledge of pictures and their
technique and a good visual memory are not suffi-
cient to support him, then his reader had better
turn to the beautiful plates.” In this, however, he
does himsell injustice, for his text is full of interest-
ing matter, written in a charming, unaffected style,
and free from the irritating laying down of the law
in which so many critics indulge. He has striven,
he says, to convey the impressions he felt when in
contact with the works of the masters, and has
wisely left archaeology to the archaeologists. The
chapters on the Early Spanish School and the
“Flemish Primitives” are especially delightful
reading. In spite of his English nationality, this
enthusiastic writer would appear to feel for the
Prado as ardent a devotion as if he were a
Spaniard. He expresses a longing desire that
private munificence should make possible the
addition of a representative picture by Rembrandt
to this congress of master-painters, and naively
suggests that “some American millionaire with tardy
but possibly sound prospects in Cuba” might do
this. “ It would be remembered gratefully,” he says,
“and an unexpected thousand or so over the record
price would secure a Rembrandt easily enough
from some English nobleman.” In selecting the
pictures for reproduction from what he justly
calls the “Painters’ Gallery” par excellence, the
Mecca of the modern artist,” Mr. Ricketts says
expediency has necessitated the absence of some
that would otherwise have been included. Condi-
tions of lighting, for instance, rendered impossible
the obtaining of a good photograph of Titian’s Pro-
metheus, and technical difficulties led to the omission
of the same master’s Charles V. in white. In

spite of this, however, the collection is a thoroughly
representative one, including not only many fine
examples of the masterpieces of Velasquez, Goya,
Murillo, Ribera, and II Greco, who are, of
course, the elite of the gallery, but also of Titian,
eight of whose works are given; of Raphael,
Correggio, Andrea del Sarto, Giorgione, Rubens,
Van Dyck, Holbein, and Diirer. Amongst the
plates, those after Diirer’s Portrait of Phans Imhof,
Holbein’s Portrait of an Utiknoivn Man, Rubens’
Rondo, Antonio Mor’s Mary, Queen of England,
and Andrea del Sarto’s Madonna and Child, with
St. John, are perhaps the best in the actual
rendering of tone values, but many of the others
are also excellent.
Das Englische Haus. By Hermann Muthesius.
(Berlin : Ernest Wasmuth.) In papercover 25 marks,
bound 30 marks.—An incidental and most grati-
fying proof of the growing sense of kinship between
the German and English nations, is afforded by the
publication of this truly charming volume on the
“ Evolution of the British Home,” the first ot a
series of three. The author has a keen apprecia-
tion of all that is best in the character of the
islanders who, he says, share the advantages of being
cut off from the rest of the world by the sea, yet
are in touch with the most remote districts of the
world. Bearing unmistakably the impress of the
unique character of those for whom it has been
evolved, English architecture, in his opinion, yet
shows the modifying influence of styles worked out
in countries so widely separated from the British
Isles as Ceylon, India, Japan, China, and Italy, so
that in it may be traced, not only the history of the
most home-loving people on the face of the earth,
but also that of their intercourse with others. The
Introduction of Herr Muthesius is a masterly essay
on English home-life that might well have been
penned by one to the manner born : he sees in the
predilection for a separate dwelling a reflection of
the sturdy independence of the English people ; in
the beauty of that dwelling, a reflection of the
beauty of English landscape scenery, and con-
siders life in such a home an art education in itself.
In a word he is in true accord with the spirit as
well as the outward form of every phase of Anglo-
Saxon domestic architecture, he reverences all that
is worthy in the past or in the present, and is as full
of hope for the future as could be the most patriotic
native of Great Britain. Having thus put himself, as it
were, in thorough sympathy with the English public
if not alas! with all his fellow-countrymen, this
enthusiastic author proceeds to give an exhaustive
and detailed history of the development of the
361