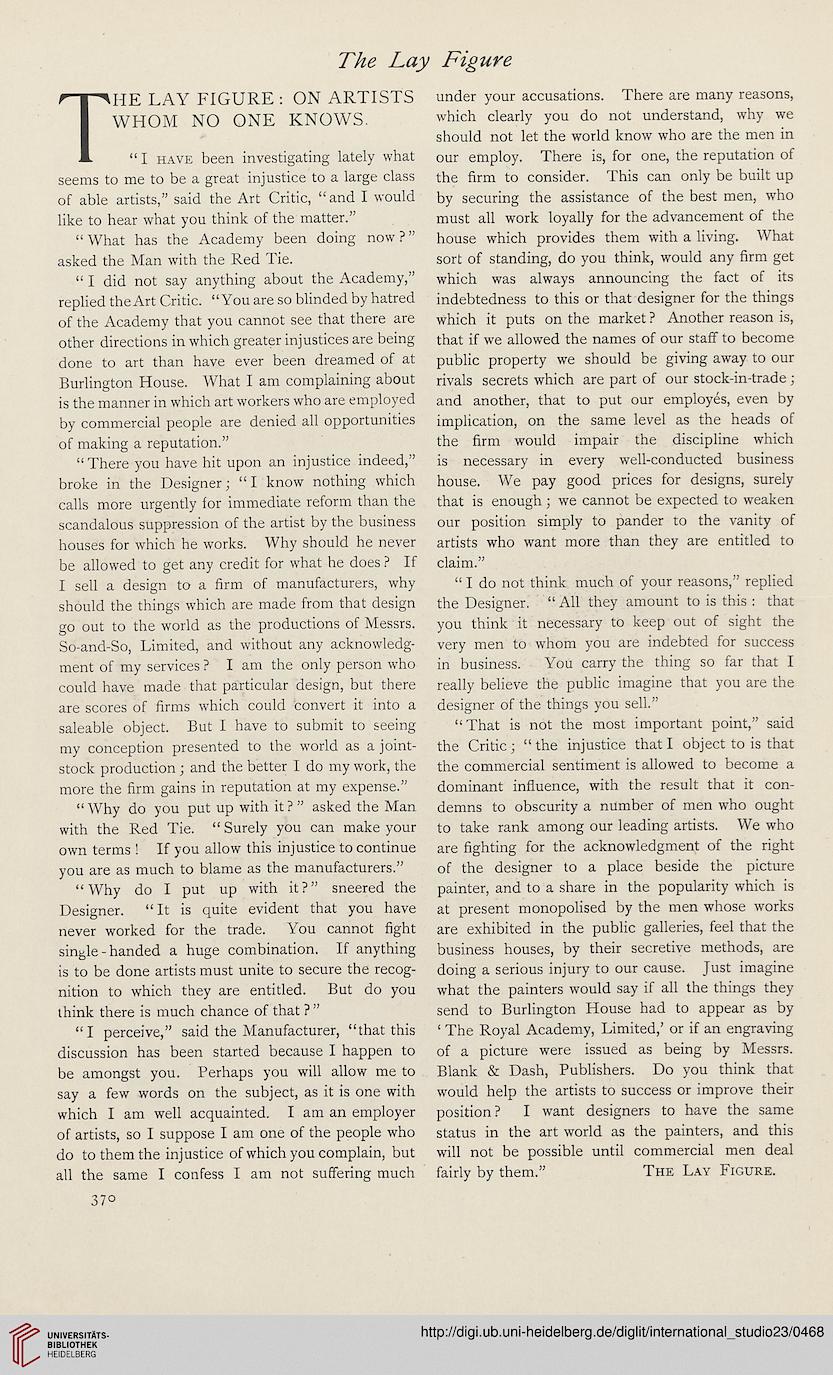 The lay figure : on artists
WHOM NO ONE KNOWS.
“ I have been investigating lately what
seems to me to be a great injustice to a large class
of able artists,” said the Art Critic, “and I would
like to hear what you think of the matter.”
“ What has the Academy been doing now ? ”
asked the Man with the Red Tie.
“ I did not say anything about the Academy,”
replied the Art Critic. “You are so blinded by hatred
of the Academy that you cannot see that there are
other directions in which greater injustices are being
done to art than have ever been dreamed of at
Burlington House. What I am complaining about
is the manner in which art workers who are employed
by commercial people are denied all opportunities
of making a reputation.”
“ There you have hit upon an injustice indeed,”
broke in the Designer; “I know nothing which
calls more urgently for immediate reform than the
scandalous suppression of the artist by the business
houses for which he works. Why should he never
be allowed to get any credit for what he does ? If
I sell a design to a firm of manufacturers, why
should the things which are made from that design
go out to the world as the productions of Messrs.
So-and-So, Limited, and without any acknowledg-
ment of my services ? I am the only person who
could have made that particular design, but there
are scores of firms which could convert it into a
saleable object. But I have to submit to seeing
my conception presented to the world as a joint-
stock production ; and the better I do my work, the
more the firm gains in reputation at my expense.”
“ Why do you put up with it ? ” asked the Man
with the Red Tie. “ Surely you can make your
own terms ! If you allow this injustice to continue
you are as much to blame as the manufacturers.”
“Why do I put up with it?” sneered the
Designer. “It is quite evident that you have
never worked for the trade. You cannot fight
single-handed a huge combination. If anything
is to be done artists must unite to secure the recog-
nition to which they are entitled. But do you
think there is much chance of that ? ”
“I perceive,” said the Manufacturer, “that this
discussion has been started because I happen to
be amongst you. Perhaps you will allow me to
say a few words on the subject, as it is one with
which I am well acquainted. I am an employer
of artists, so I suppose I am one of the people who
do to them the injustice of which you complain, but
all the same I confess I am not suffering much
37°

under your accusations. There are many reasons,
which clearly you do not understand, why we
should not let the world know who are the men in
our employ. There is, for one, the reputation of
the firm to consider. This can only be built up
by securing the assistance of the best men, who
must all work loyally for the advancement of the
house which provides them with a living. What
sort of standing, do you think, would any firm get
which was always announcing the fact of its
indebtedness to this or that designer for the things
which it puts on the market ? Another reason is,
that if we allowed the names of our staff to become
public property we should be giving away to our
rivals secrets which are part of our stock-in-trade;
and another, that to put our employes, even by
implication, on the same level as the heads of
the firm would impair the discipline which
is necessary in every well-conducted business
house. We pay good prices for designs, surely
that is enough; we cannot be expected to weaken
our position simply to pander to the vanity of
artists who want more than they are entitled to
claim.”
“ I do not think much of your reasons,” replied
the Designer. “ All they amount to is this : that
you think it necessary to keep out of sight the
very men to whom you are indebted for success
in business. You carry the thing so far that I
really believe the public imagine that you are the
designer of the things you sell.”
“That is not the most important point,” said
the Critic; “the injustice that I object to is that
the commercial sentiment is allowed to become a
dominant influence, with the result that it con-
demns to obscurity a number of men who ought
to take rank among our leading artists. We who
are fighting for the acknowledgment of the right
of the designer to a place beside the picture
painter, and to a share in the popularity which is
at present monopolised by the men whose works
are exhibited in the public galleries, feel that the
business houses, by their secretive methods, are
doing a serious injury to our cause. Just imagine
what the painters would say if all the things they
send to Burlington House had to appear as by
1 The Royal Academy, Limited,’ or if an engraving
of a picture were issued as being by Messrs.
Blank & Dash, Publishers. Do you think that
would help the artists to success or improve their
position? I want designers to have the same
status in the art world as the painters, and this
will not be possible until commercial men deal
fairly by them.” The Lay Figure.