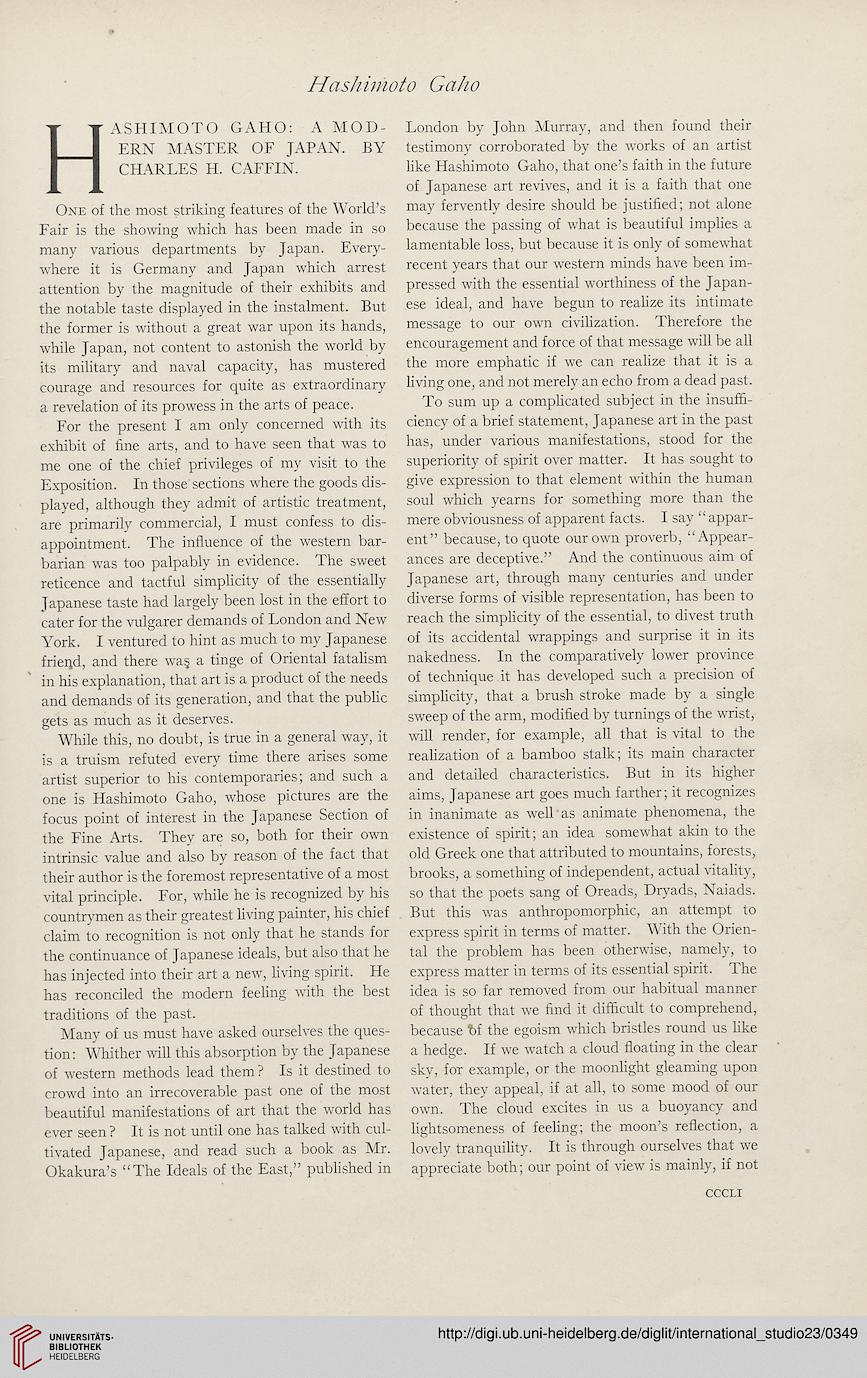 HASHIMOTO GAHO: A MOD-
ERN MASTER OF JAPAN. BY
CHARLES H. CAFFIN.
One of the most striking features of the World’s
Fair is the showing which has been made in so
many various departments by Japan. Every-
where it is Germany and Japan which arrest
attention by the magnitude of their exhibits and
the notable taste displayed in the instalment. But
the former is without a great war upon its hands,
while Japan, not content to astonish the world by
its military and naval capacity, has mustered
courage and resources for quite as extraordinary
a revelation of its prowess in the arts of peace.
For the present I am only concerned with its
exhibit of fine arts, and to have seen that was to
me one of the chief privileges of my visit to the
Exposition. In those sections where the goods dis-
played, although they admit of artistic treatment,
are primarily commercial, I must confess to dis-
appointment. The influence of the western bar-
barian was too palpably in evidence. The sweet
reticence and tactful simplicity of the essentially
Japanese taste had largely been lost in the effort to
cater for the vulgarer demands of London and New
York. I ventured to hint as much to my Japanese
friend, and there wa§ a tinge of Oriental fatalism
in his explanation, that art is a product of the needs
and demands of its generation, and that the public
gets as much as it deserves.
While this, no doubt, is true in a general way, it
is a truism refuted every time there arises some
artist superior to his contemporaries; and such a
one is Hashimoto Gaho, whose pictures are the
focus point of interest in the Japanese Section of
the Fine Arts. They are so, both for their own
intrinsic value and also by reason of the fact that
their author is the foremost representative of a most
vital principle. For, while he is recognized by his
countrymen as their greatest living painter, his chief
claim to recognition is not only that he stands for
the continuance of Japanese ideals, but also that he
has injected into their art a new, living spirit. He
has reconciled the modern feeling with the best
traditions of the past.
Many of us must have asked ourselves the ques-
tion: Whither will this absorption by the Japanese
of western methods lead them? Is it destined to
crowd into an irrecoverable past one of the most
beautiful manifestations of art that the world has
ever seen ? It is not until one has talked with cul-
tivated Japanese, and read such a book as Mr.
Okakura’s “The Ideals of the East,” published in

London by John Murray, and then found their
testimony corroborated by the works of an artist
like Hashimoto Gaho, that one’s faith in the future
of Japanese art revives, and it is a faith that one
may fervently desire should be justified; not alone
because the passing of what is beautiful implies a
lamentable loss, but because it is only of somewhat
recent years that our western minds have been im-
pressed with the essential worthiness of the Japan-
ese ideal, and have begun to realize its intimate
message to our own civilization. Therefore the
encouragement and force of that message will be all
the more emphatic if we can realize that it is a
living one, and not merely an echo from a dead past.
To sum up a complicated subject in the insuffi-
ciency of a brief statement, Japanese art in the past
has, under various manifestations, stood for the
superiority of spirit over matter. It has sought to
give expression to that element within the human
soul which yearns for something more than the
mere obviousness of apparent facts. I say “appar-
ent” because, to quote our own proverb, “Appear-
ances are deceptive.” And the continuous aim of
Japanese art, through many centuries and under
diverse forms of visible representation, has been to
reach the simplicity of the essential, to divest truth
of its accidental wrappings and surprise it in its
nakedness. In the comparatively lower province
of technique it has developed such a precision of
simplicity, that a brush stroke made by a single
sweep of the arm, modified by turnings of the wrist,
will render, for example, all that is vital to the
realization of a bamboo stalk; its main character
and detailed characteristics. But in its higher
aims, Japanese art goes much farther; it recognizes
in inanimate as well as animate phenomena, the
existence of spirit; an idea somewhat akin to the
old Greek one that attributed to mountains, forests,
brooks, a something of independent, actual vitality,
so that the poets sang of Oreads, Dryads, Naiads.
But this was anthropomorphic, an attempt to
express spirit in terms of matter. With the Orien-
tal the problem has been otherwise, namely, to
express matter in terms of its essential spirit. The
idea is so far removed from our habitual manner
of thought that we find it difficult to comprehend,
because t>f the egoism which bristles round us like
a hedge. If we watch a cloud floating in the clear
sky, for example, or the moonlight gleaming upon
water, they appeal, if at all, to some mood of our
own. The cloud excites in us a buoyancy and
lightsomeness of feeling; the moon’s reflection, a
lovely tranquility. It is through ourselves that we
appreciate both; our point of view is mainly, if not