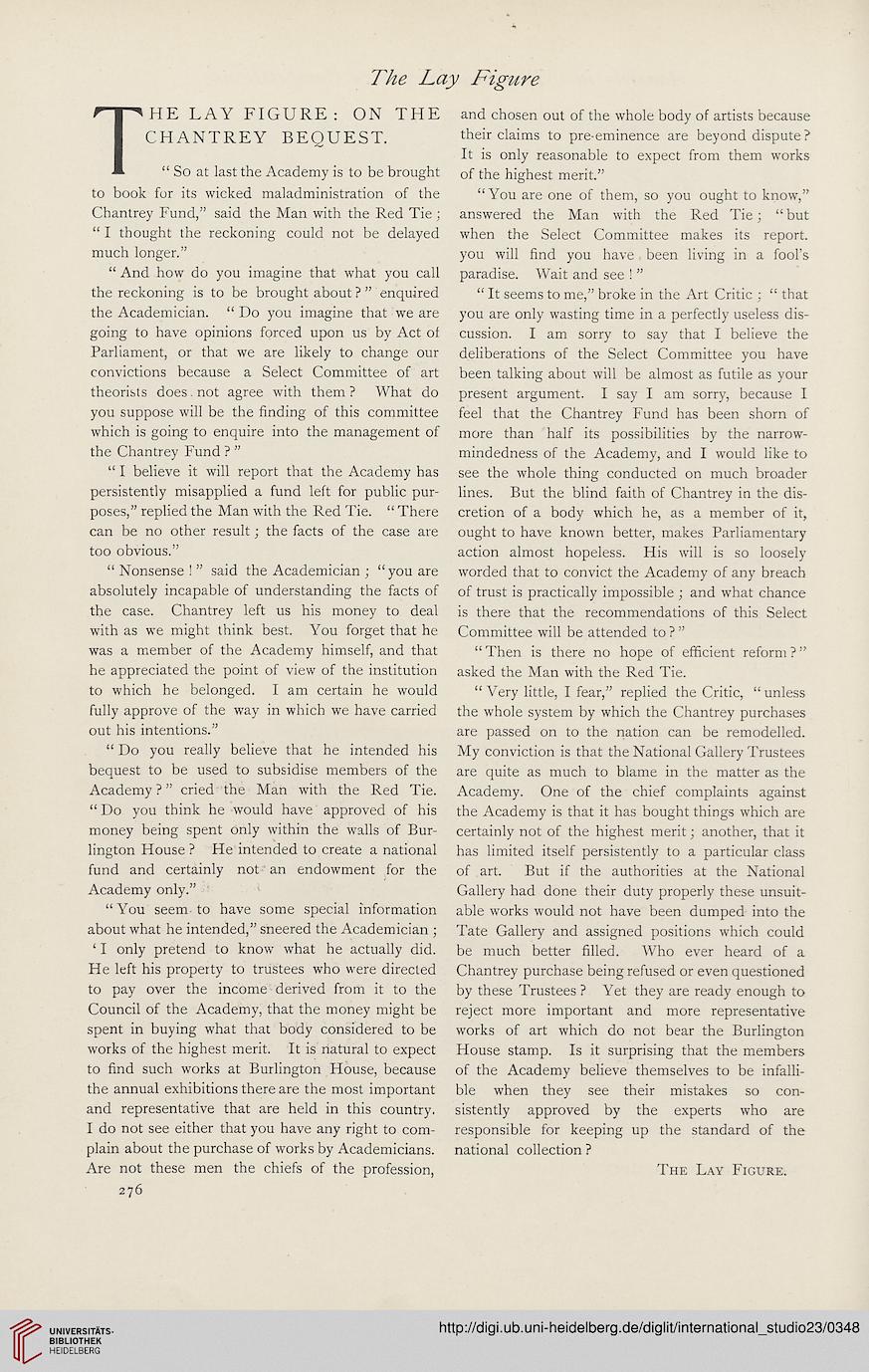 HE LAY FIGURE: ON THE
CHANTREY BEQUEST.
“ So at last the Academy is to be brought
to book for its wicked maladministration of the
Chantrey Fund,” said the Man with the Red Tie ;
“ I thought the reckoning could not be delayed
much longer.”
“ And how do you imagine that what you call
the reckoning is to be brought about ? ” enquired
the Academician. “ Do you imagine that we are
going to have opinions forced upon us by Act of
Parliament, or that we are likely to change our
convictions because a Select Committee of art
theorists does. not agree with them ? What do
you suppose will be the finding of this committee
which is going to enquire into the management of
the Chantrey Fund ? ”
“ I believe it will report that the Academy has
persistently misapplied a fund left for public pur-
poses,” replied the Man with the Red Tie. “ There
can be no other result; the facts of the case are
too obvious.”
“ Nonsense ! ” said the Academician ; “you are
absolutely incapable of understanding the facts of
the case. Chantrey left us his money to deal
with as we might think best. You forget that he
was a member of the Academy himself, and that
he appreciated the point of view of the institution
to which he belonged. I am certain he would
fully approve of the way in which we have carried
out his intentions.”
“ Do you really believe that he intended his
bequest to be used to subsidise members of the
Academy ? ” cried the Man with the Red Tie.
“ Do you think he would have approved of his
money being spent only within the walls of Bur-
lington House ? He intended to create a national
fund and certainly not an endowment for the
Academy only.”
“You seem to have some special information
about what he intended,” sneered the Academician ;
‘ I only pretend to know what he actually did.
He left his property to trustees who were directed
to pay over the income derived from it to the
Council of the Academy, that the money might be
spent in buying what that body considered to be
works of the highest merit. It is natural to expect
to find such works at Burlington House, because
the annual exhibitions there are the most important
and representative that are held in this country.
I do not see either that you have any right to com-
plain about the purchase of works by Academicians.
Are not these men the chiefs of the profession,
276

and chosen out of the whole body of artists because
their claims to pre-eminence are beyond dispute ?
It is only reasonable to expect from them works
of the highest merit.”
“You are one of them, so you ought to know,”
answered the Man with the Red Tie; “ but
when the Select Committee makes its report,
you will find you have been living in a fool’s
paradise. Wait and see ! ”
“ It seems to me,” broke in the Art Critic ; “ that
you are only wasting time in a perfectly useless dis-
cussion. I am sorry to say that I believe the
deliberations of the Select Committee you have
been talking about will be almost as futile as your
present argument. I say I am sorry, because I
feel that the Chantrey Fund has been shorn of
more than half its possibilities by the narrow-
mindedness of the Academy, and I would like to
see the whole thing conducted on much broader
lines. But the blind faith of Chantrey in the dis-
cretion of a body which he, as a member of it,
ought to have known better, makes Parliamentary
action almost hopeless. His will is so loosely
worded that to convict the Academy of any breach
of trust is practically impossible ; and what chance
is there that the recommendations of this Select
Committee will be attended to ? ”
“ Then is there no hope of efficient reform ? ”
asked the Man with the Red Tie.
“Very little, I fear,” replied the Critic, “unless
the whole system by which the Chantrey purchases
are passed on to the nation can be remodelled.
My conviction is that the National Gallery Trustees
are quite as much to blame in the matter as the
Academy. One of the chief complaints against
the Academy is that it has bought things which are
certainly not of the highest merit; another, that it
has limited itself persistently to a particular class
of art. But if the authorities at the National
Gallery had done their duty properly these unsuit-
able works would not have been dumped into the
Tate Gallery and assigned positions which could
be much better filled. Who ever heard of a
Chantrey purchase being refused or even questioned
by these Trustees ? Yet they are ready enough to
reject more important and more representative
works of art which do not bear the Burlington
House stamp. Is it surprising that the members
of the Academy believe themselves to be infalli-
ble when they see their mistakes so con-
sistently approved by the experts who are
responsible for keeping up the standard of the
national collection ?