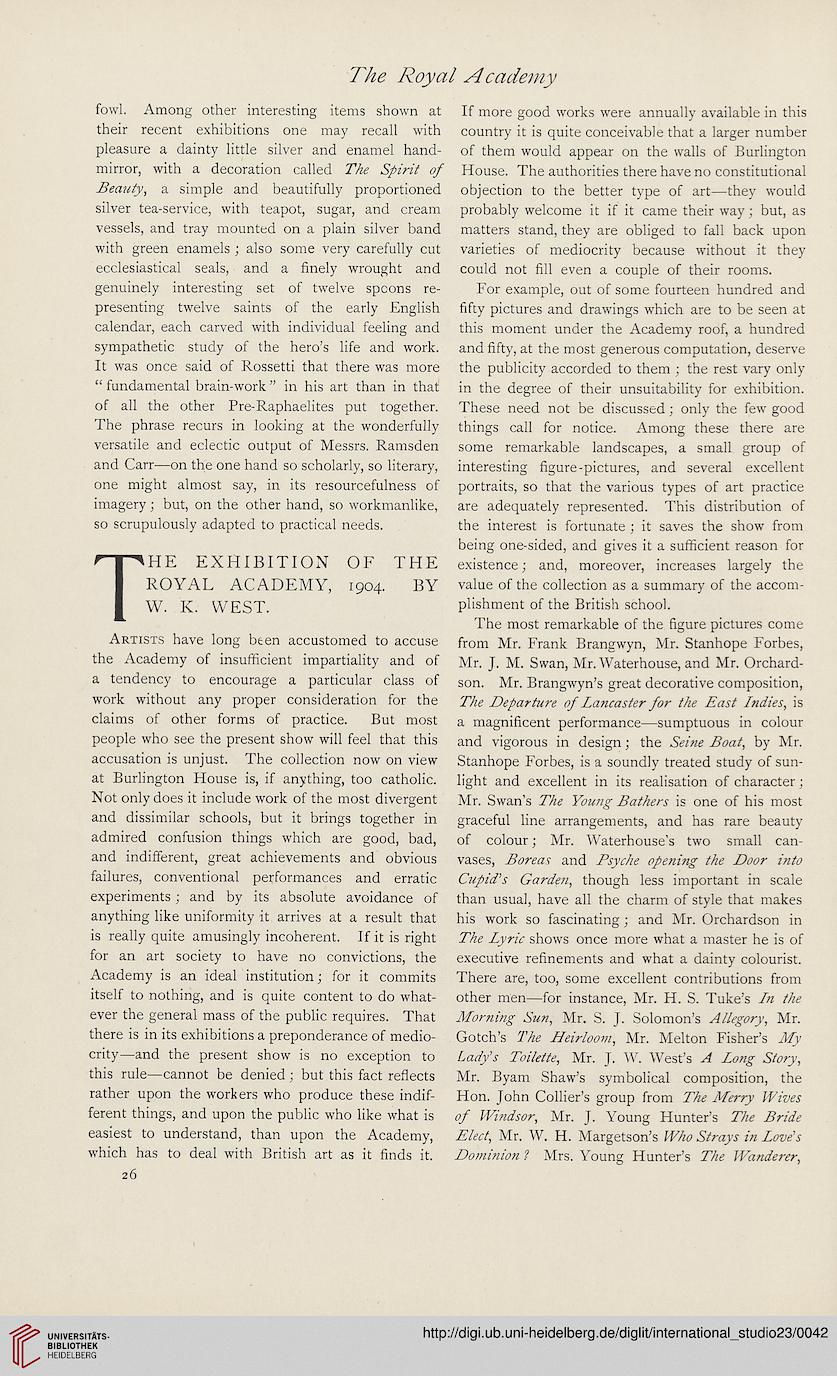 fowl. Among other interesting items shown at
their recent exhibitions one may recall with
pleasure a dainty little silver and enamel hand-
mirror, with a decoration called The Spirit of
Beauty, a simple and beautifully proportioned
silver tea-service, with teapot, sugar, and cream
vessels, and tray mounted on a plain silver band
with green enamels ; also some very carefully cut
ecclesiastical seals, and a finely wrought and
genuinely interesting set of twelve spcons re-
presenting twelve saints of the early English
calendar, each carved with individual feeling and
sympathetic study of the hero’s life and work.
It was once said of Rossetti that there was more
“ fundamental brain-work ” in his art than in that
of all the other Pre-Raphaelites put together.
The phrase recurs in looking at the wonderfully
versatile and eclectic output of Messrs. Ramsden
and Carr—on the one hand so scholarly, so literary,
one might almost say, in its resourcefulness of
imagery; but, on the other hand, so workmanlike,
so scrupulously adapted to practical needs.
HE EXHIBITION OF THE
ROYAL ACADEMY, 1904. BY
W. K. WEST.
Artists have long been accustomed to accuse
the Academy of insufficient impartiality and of
a tendency to encourage a particular class of
work without any proper consideration for the
claims of other forms of practice. But most
people who see the present show will feel that this
accusation is unjust. The collection now on view
at Burlington House is, if anything, too catholic.
Not only does it include work of the most divergent
and dissimilar schools, but it brings together in
admired confusion things which are good, bad,
and indifferent, great achievements and obvious
failures, conventional performances and erratic
experiments; and by its absolute avoidance of
anything like uniformity it arrives at a result that
is really quite amusingly incoherent. If it is right
for an art society to have no convictions, the
Academy is an ideal institution; for it commits
itself to nothing, and is quite content to do what-
ever the general mass of the public requires. That
there is in its exhibitions a preponderance of medio-
crity—and the present show is no exception to
this rule—cannot be denied; but this fact reflects
rather upon the workers who produce these indif-
ferent things, and upon the public who like what is
easiest to understand, than upon the Academy,
which has to deal with British art as it finds it.
26

If more good works were annually available in this
country it is quite conceivable that a larger number
of them would appear on the walls of Burlington
House. The authorities there have no constitutional
objection to the better type of art—they would
probably welcome it if it came their way; but, as
matters stand, they are obliged to fall back upon
varieties of mediocrity because without it they
could not fill even a couple of their rooms.
For example, out of some fourteen hundred and
fifty pictures and drawings which are to be seen at
this moment under the Academy roof, a hundred
and fifty, at the most generous computation, deserve
the publicity accorded to them ; the rest vary only
in the degree of their unsuitability for exhibition.
These need not be discussed; only the few good
things call for notice. Among these there are
some remarkable landscapes, a small group of
interesting figure-pictures, and several excellent
portraits, so that the various types of art practice
are adequately represented. This distribution of
the interest is fortunate ; it saves the show from
being one-sided, and gives it a sufficient reason for
existence; and, moreover, increases largely the
value of the collection as a summary of the accom-
plishment of the British school.
The most remarkable of the figure pictures come
from Mr. Frank Brangwyn, Mr. Stanhope Forbes,
Mr. J. M. Swan, Mr. Waterhouse, and Mr. Orchard-
son. Mr. Brangwyn’s great decorative composition,
The Departure of Lancaster for the East Indies, is
a magnificent performance—sumptuous in colour
and vigorous in design; the Seine Boat, by Mr.
Stanhope Forbes, is a soundly treated study of sun-
light and excellent in its realisation of character;
Mr. Swan’s The Young Bathers is one of his most
graceful line arrangements, and has rare beauty
of colour; Mr. Waterhouse's two small can-
vases, Boreas and Psyche opening the Door into
Cupid's Garden, though less important in scale
than usual, have all the charm of style that makes
his work so fascinating; and Mr. Orchardson in
The Lyric shows once more what a master he is of
executive refinements and what a dainty colourist.
There are, too, some excellent contributions from
other men—for instance, Mr. H. S. Tuke’s In the
Morning Sun, Mr. S. J. Solomon’s Allegory, Mr.
Gotch’s The Heirloom, Mr. Melton Fisher’s My
Lady's Toilette, Mr. J. W. West’s A Long Story,
Mr. Byam Shaw’s symbolical composition, the
Hon. John Collier’s group from The Merry Wives
of Windsor, Mr. J. Young Hunter’s The Bride
Elect, Mr. W. H. Margetson’s Who Strays in Love's
Dominion ? Mrs. Young Hunter’s The Wanderer,