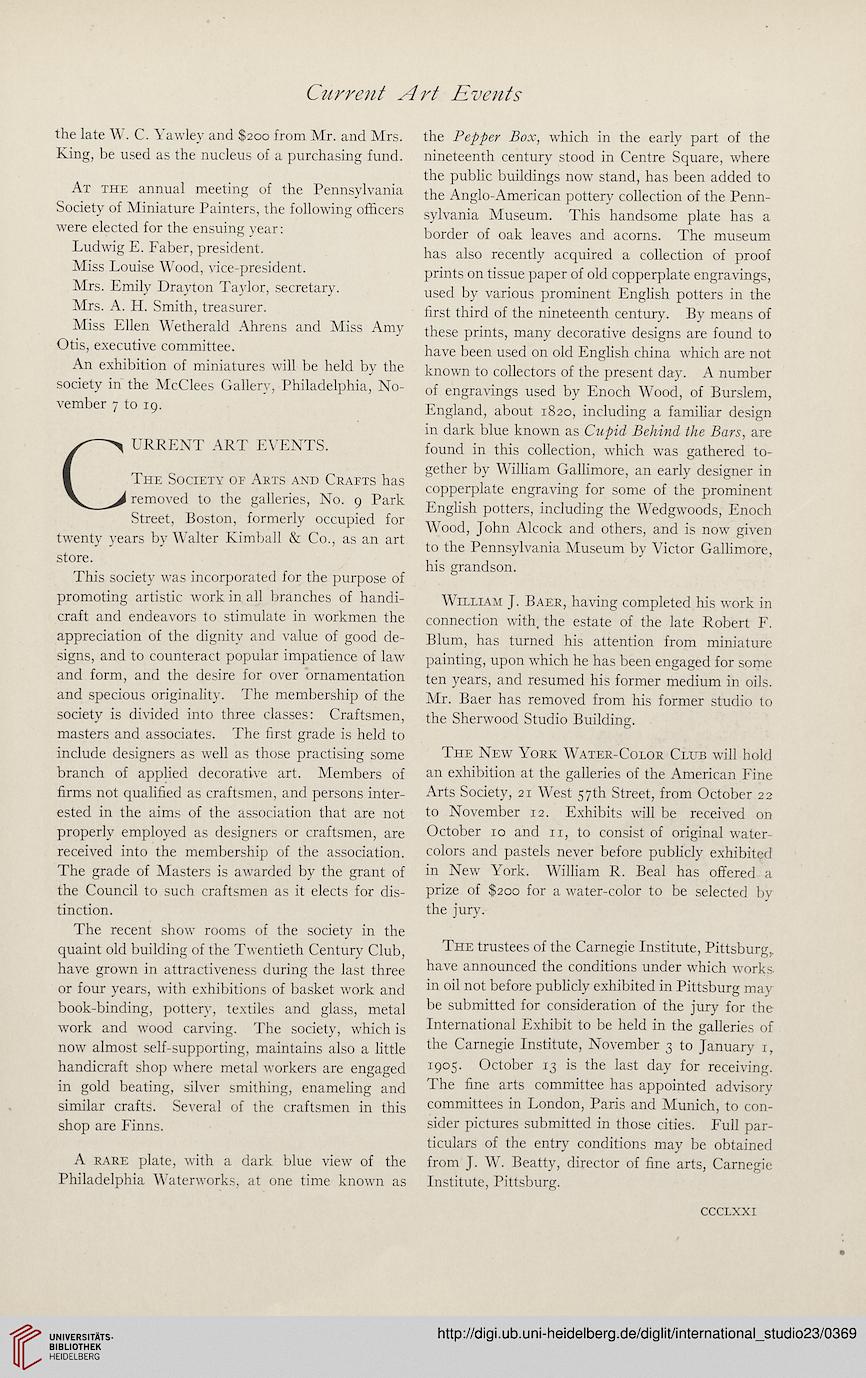 the late W. C. Yawley and $200 from Mr. and Mrs.
King, be used as the nucleus of a purchasing fund.
At the annual meeting of the Pennsylvania
Society of Miniature Painters, the following officers
were elected for the ensuing year:
Ludwig E. Faber, president.
Miss Louise Wood, vice-president.
Mrs. Emily Drayton Taylor, secretary.
Mrs. A. H. Smith, treasurer.
Miss Ellen Wetherald Ahrens and Miss Amy
Otis, executive committee.
An exhibition of miniatures will be held by the
society in the McClees Gallery, Philadelphia, No-
vember 7 to 19.
URRENT ART EVENTS.
The Society of Akts and Crafts has
removed to the galleries, No. 9 Park
Street, Boston, formerly occupied for
twenty years by Walter Kimball & Co., as an art
store.
This society was incorporated for the purpose of
promoting artistic work in all branches of handi-
craft and endeavors to stimulate in workmen the
appreciation of the dignity and value of good de-
signs, and to counteract popular impatience of law
and form, and the desire for over ornamentation
and specious originality. The membership of the
society is divided into three classes: Craftsmen,
masters and associates. The first grade is held to
include designers as well as those practising some
branch of applied decorative art. Members of
firms not qualified as craftsmen, and persons inter-
ested in the aims of the association that are not
properly employed as designers or craftsmen, are
received into the membership of the association.
The grade of Masters is awarded by the grant of
the Council to such craftsmen as it elects for dis-
tinction.
The recent show rooms of the society in the
quaint old building of the Twentieth Century Club,
have grown in attractiveness during the last three
or four years, with exhibitions of basket work and
book-binding, pottery, textiles and glass, metal
work and wood carving. The society, which is
now almost self-supporting, maintains also a little
handicraft shop where metal workers are engaged
in gold beating, silver smithing, enameling and
similar crafts. Several of the craftsmen in this
shop are Finns.
A rare plate, with a dark blue view of the
Philadelphia Waterworks, at one time known as

the Pepper Box, which in the early part of the
nineteenth century stood in Centre Square, where
the public buildings now stand, has been added to
the Anglo-American pottery collection of the Penn-
sylvania Museum. This handsome plate has a
border of oak leaves and acorns. The museum
has also recently acquired a collection of proof
prints on tissue paper of old copperplate engravings,
used by various prominent English potters in the
first third of the nineteenth century. By means of
these prints, many decorative designs are found to
have been used on old English china which are not
known to collectors of the present day. A number
of engravings used by Enoch Wood, of Burslem,
England, about 1820, including a familiar design
in dark blue known as Cupid Behind the Bars, are
found in this collection, which was gathered to-
gether by William Gallimore, an early designer in
copperplate engraving for some of the prominent
English potters, including the Wedgwoods, Enoch
Wood, John Alcock and others, and is now given
to the Pennsylvania Museum by Victor Gallimore,
his grandson.
William J. Baer, having completed his work in
connection with, the estate of the late Robert F.
Blum, has turned his attention from miniature
painting, upon which he has been engaged for some
ten years, and resumed his former medium in oils.
Mr. Baer has removed from his former studio to
the Sherwood Studio Building.
The New York Water-Color Club will hold
an exhibition at the galleries of the American Fine
Arts Society, 21 West 57th Street, from October 22
to November 12. Exhibits will be received on
October 10 and n, to consist of original water-
colors and pastels never before publicly exhibited
in New York. William R. Beal has offered a
prize of $200 for a water-color to be selected by
the jury.
The trustees of the Carnegie Institute, Pittsburgh
have announced the conditions under which works-
in oil not before publicly exhibited in Pittsburg may
be submitted for consideration of the jury for the
International Exhibit to be held in the galleries of
the Carnegie Institute, November 3 to January 1,
1905. October 13 is the last day for receiving.
The fine arts committee has appointed advisory
committees in London, Paris and Munich, to con-
sider pictures submitted in those cities. Full par-
ticulars of the entry conditions may be obtained
from J. W. Beatty, director of fine arts, Carnegie
Institute, Pittsburg.