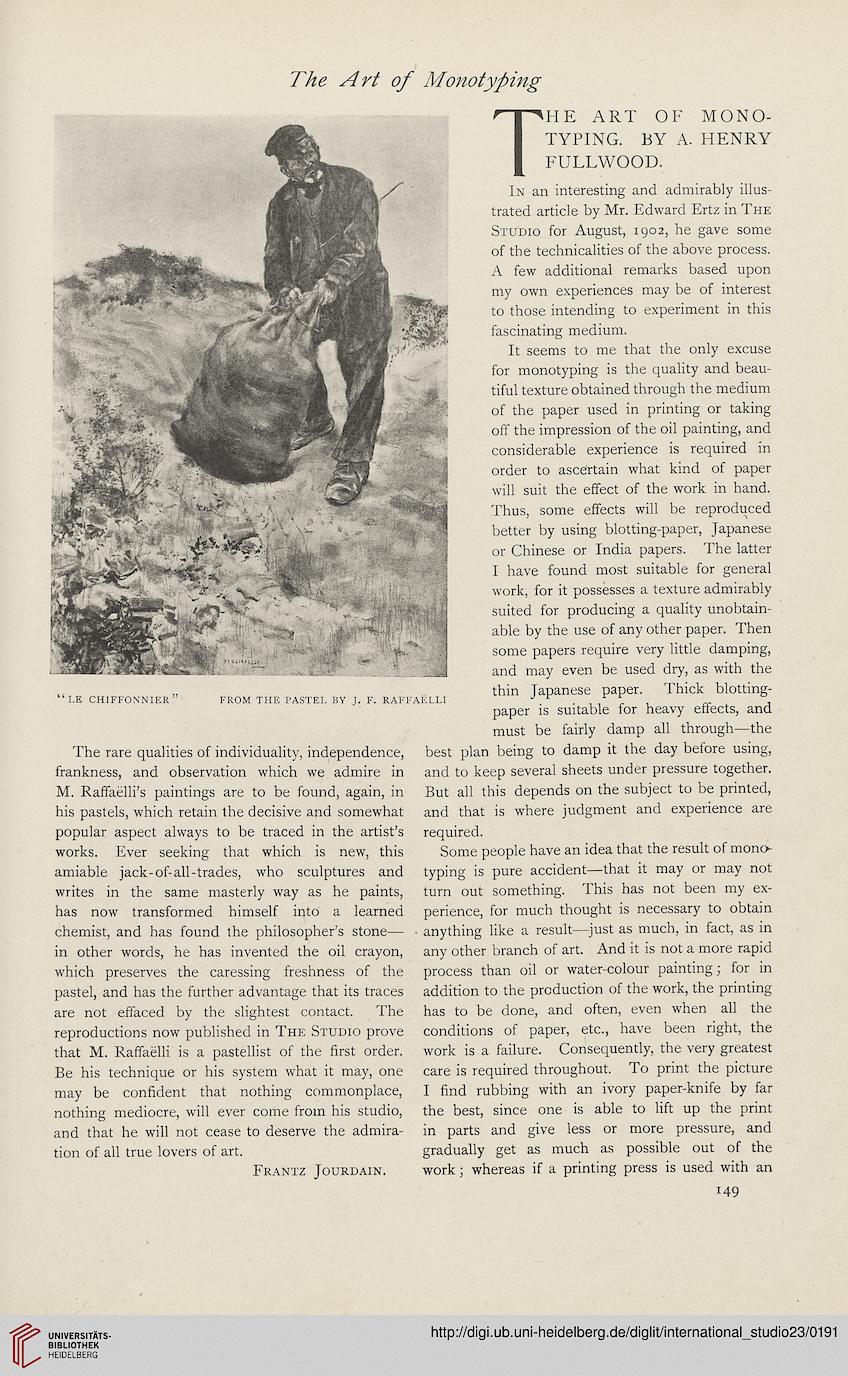 The rare qualities of individuality, independence,
frankness, and observation which we admire in
M. Raffaelli’s paintings are to be found, again, in
his pastels, which retain the decisive and somewhat
popular aspect always to be traced in the artist’s
works. Ever seeking that which is new, this
amiable jack-of-all-trades, who sculptures and
writes in the same masterly way as he paints,
has now transformed himself into a learned
chemist, and has found the philosopher’s stone—
in other words, he has invented the oil crayon,
which preserves the caressing freshness of the
pastel, and has the further advantage that its traces
are not effaced by the slightest contact. The
reproductions now published in The Studio prove
that M. Raffaelli is a pastellist of the first order.
Be his technique or his system what it may, one
may be confident that nothing commonplace,
nothing mediocre, will ever come from his studio,
and that he will not cease to deserve the admira-
tion of all true lovers of art.
Frantz Jourdain.

HE ART OF MONO-
TYPING. BY A. HENRY
FULLWOOD.
In an interesting and admirably illus-
trated article by Mr. Edward Ertz in The
Studio for August, 1902, he gave some
of the technicalities of the above process.
A few additional remarks based upon
my own experiences may be of interest
to those intending to experiment in this
fascinating medium.
It seems to me that the only excuse
for monotyping is the quality and beau-
tiful texture obtained through the medium
of the paper used in printing or taking
off the impression of the oil painting, and
considerable experience is required in
order to ascertain what kind of paper
will suit the effect of the work in hand.
Thus, some effects will be reproduced
better by using blotting-paper, Japanese
or Chinese or India papers. The latter
I have found most suitable for general
work, for it possesses a texture admirably
suited for producing a quality unobtain-
able by the use of any other paper. Then
some papers require very little damping,
and may even be used dry, as with the
thin Japanese paper. Thick blotting-
paper is suitable for heavy effects, and
must be fairly damp all through—the
best plan being to damp it the day before using,
and to keep several sheets under pressure together.
But all this depends on the subject to be printed,
and that is where judgment and experience are
required.
Some people have an idea that the result of mono-
typing is pure accident—that it may or may not
turn out something. This has not been my ex-
perience, for much thought is necessary to obtain
• anything like a result—just as much, in fact, as in
any other branch of art. And it is not a more rapid
process than oil or water-colour painting; for in
addition to the production of the work, the printing
has to be done, and often, even when all the
conditions of paper, etc., have been right, the
work is a failure. Consequently, the very greatest
care is required throughout. To print the picture
I find rubbing with an ivory paper-knife by far
the best, since one is able to lift up the print
in parts and give less or more pressure, and
gradually get as much as possible out of the
work; whereas if a printing press is used with an
149