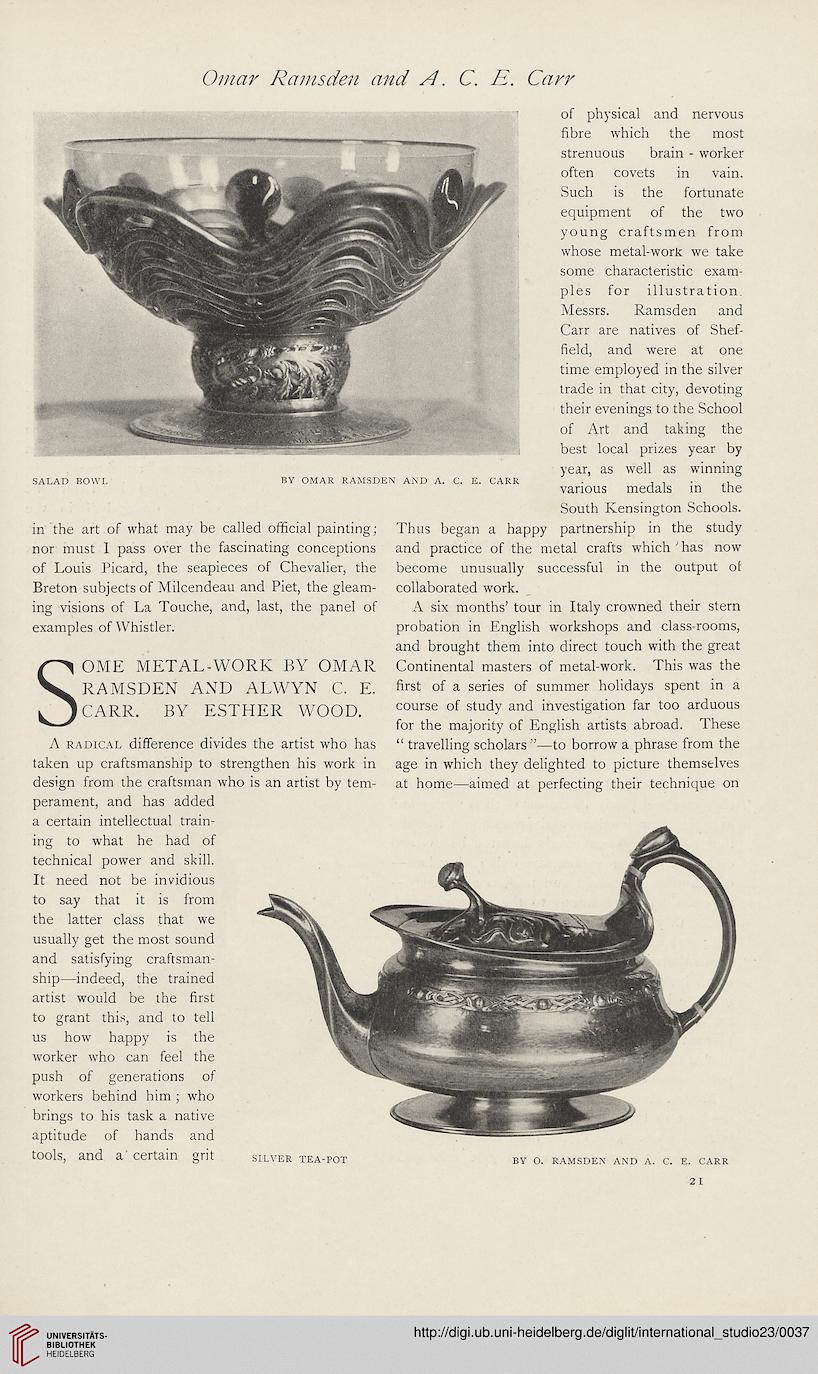 in the art of what may be called official painting;
nor must I pass over the fascinating conceptions
of Louis Picard, the seapieces of Chevalier, the
Breton subjects of Milcendeau and Piet, the gleam-
ing visions of La Touche, and, last, the panel of
examples of Whistler.

A radical difference divides the artist who has
taken up craftsmanship to strengthen his work in
design from the craftsman who is an artist by tem-
perament, and has added
a certain intellectual train-
ing to what he had of
technical power and skill.
It need not be invidious
to say that it is from
the latter class that we
usually get the most sound
and satisfying craftsman-
ship—indeed, the trained
artist would be the first
to grant this, and to tell
us how happy is the
worker who can feel the
push of generations of
workers behind him ; who
brings to his task a native
aptitude of hands and
tools, and a certain grit silver tea-pot

of physical and nervous
fibre which the most
strenuous brain - worker
often covets in vain.
Such is the fortunate
equipment of the two
young craftsmen from
whose metal-work we take
some characteristic exam-
ples for illustration.
Messrs. Ramsden and
Carr are natives of Shef-
field, and were at one
time employed in the silver
trade in that city, devoting
their evenings to the School
of Art and taking the
best local prizes year by
year, as well as winning
various medals in the
South Kensington Schools.
Thus began a happy partnership in the study
and practice of the metal crafts which ‘ has now
become unusually successful in the output ot
collaborated work.
A six months’ tour in Italy crowned their stern
probation in English workshops and class-rooms,
and brought them into direct touch with the great
Continental masters of metal-work. This was the
first of a series of summer holidays spent in a
course of study and investigation far too arduous
for the majority of English artists abroad. These
“ travelling scholars ”—to borrow a phrase from the
age in which they delighted to picture themselves
at home—aimed at perfecting their technique on