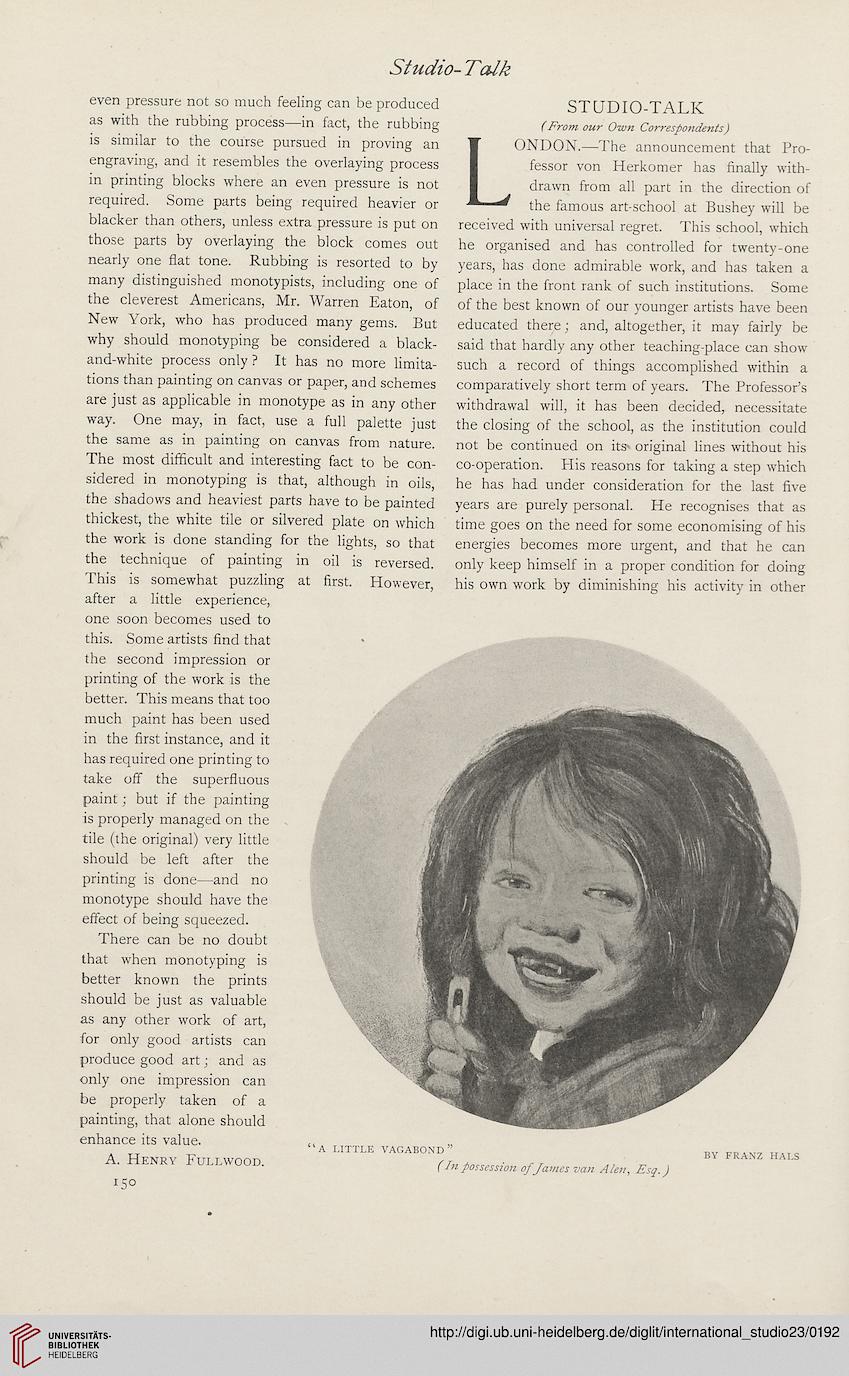 even pressure not so much feeling can be produced
as with the rubbing process—in fact, the rubbing
is similar to the course pursued in proving an
engraving, and it resembles the overlaying process
in printing blocks where an even pressure is not
required. Some parts being required heavier or
blacker than others, unless extra pressure is put on
those parts by overlaying the block comes out
nearly one flat tone. Rubbing is resorted to by
many distinguished monotypists, including one of
the cleverest Americans, Mr. Warren Eaton, of
New York, who has produced many gems. But
why should monotyping be considered a black-
and-white process only ? It has no more limita-
tions than painting on canvas or paper, and schemes
are just as applicable in monotype as in any other
way. One may, in fact, use a full palette just
the same as in painting on canvas from nature.
The most difficult and interesting fact to be con-
sidered in monotyping is that, although in oils,
the shadows and heaviest parts have to be painted
thickest, the white tile or silvered plate on which
the work is done standing for the lights, so that
the technique of painting in oil is reversed.
This is somewhat puzzling at first. However,
after a little experience,
one soon becomes used to
this. Some artists find that
the second impression or
printing of the work is the
better. This means that too
much paint has been used
in the first instance, and it
has required one printing to
take off the superfluous
paint; but if the painting
is properly managed on the
tile (the original) very little
should be left after the
printing is done—and no
monotype should have the
effect of being squeezed.
There can be no doubt
that when monotyping is
better known the prints
should be just as valuable
as any other work of art,
for only good artists can
produce good art; and as
only one impression can
be properly taken of a
painting, that alone should
enhance its value.
A. Henry Fullvvood.
15°

STUDIO-TALK
(From our Own Correspondents)
ONDON.—The announcement that Pro-
fessor von Herkomer has finally with-
drawn from all part in the direction of
the famous art-school at Bushey will be
received with universal regret. This school, which
he organised and has controlled for twenty-one
years, has done admirable work, and has taken a
place in the front rank of such institutions. Some
of the best known of our younger artists have been
educated there; and, altogether, it may fairly be
said that hardly any other teaching-place can show
such a record of things accomplished within a
comparatively short term of years. The Professor’s
withdrawal will, it has been decided, necessitate
the closing of the school, as the institution could
not be continued on its» original lines without his
co-operation. Plis reasons for taking a step which
he has had under consideration for the last five
years are purely personal. He recognises that as
time goes on the need for some economising of his
energies becomes more urgent, and that he can
only keep himself in a proper condition for doing
his own work by diminishing his activity in other