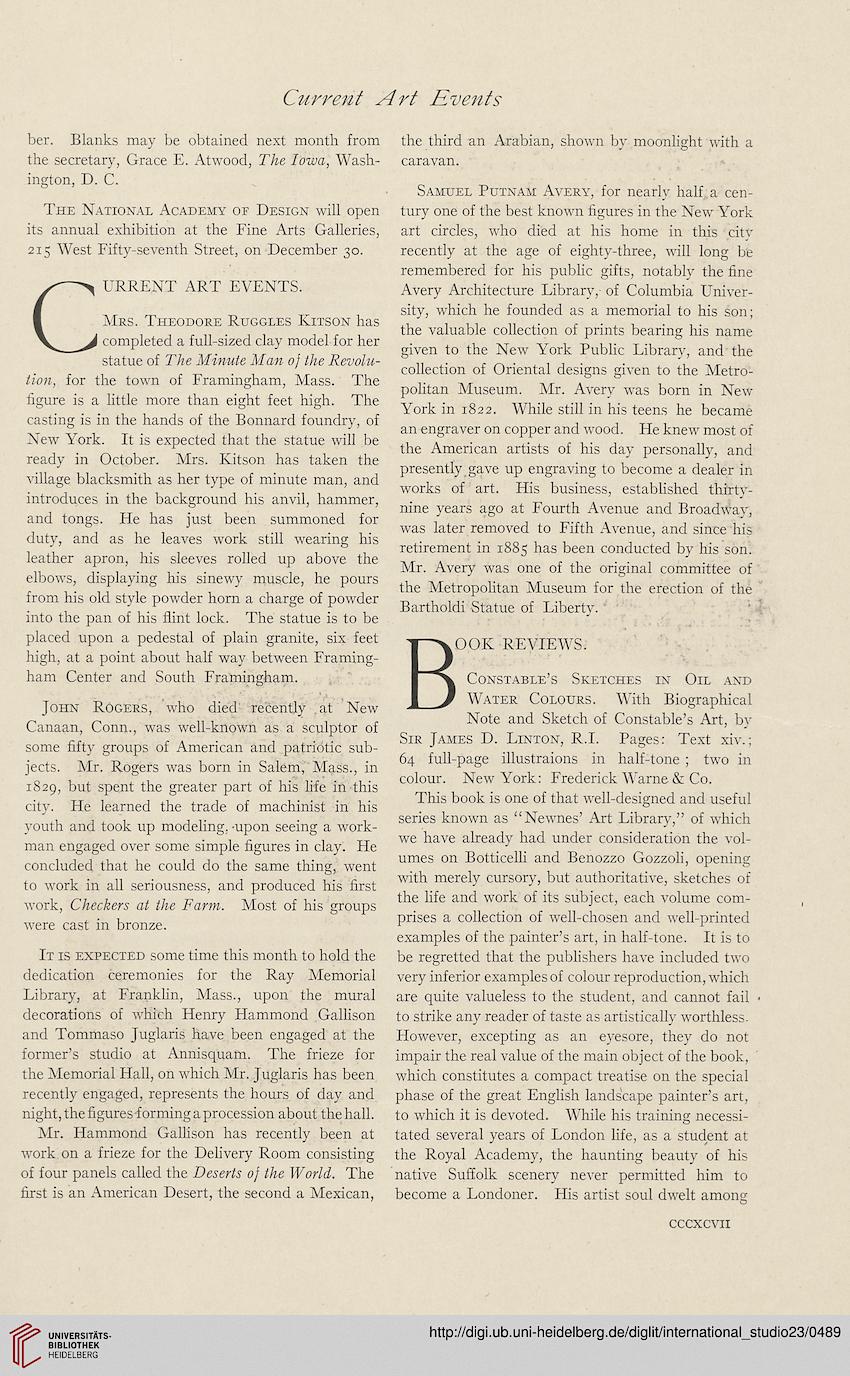 ber. Blanks may be obtained next month from
the secretary, Grace E. Atwood, The Iowa, Wash-
ington, D. C.
The National Academy of Design will open
its annual exhibition at the Fine Arts Galleries,
215 West Fifty-seventh Street, on December 30.

CURRENT ART EVENTS.
Mrs. Theodore Ruggles Kitson has
completed a full-sized clay model for her
statue of The Minute Man oj the Revolu-
tion, for the town of Framingham, Mass. The
figure is a little more than eight feet high. The
casting is in the hands of the Bonnard foundry, of
New York. It is expected that the statue will be
ready in October. Mrs. Kitson has taken the
village blacksmith as her type of minute man, and
introduces in the background his anvil, hammer,
and tongs. He has just been summoned for
duty, and as he leaves work still wearing his
leather apron, his sleeves rolled up above the
elbows, displaying his sinewy muscle, he pours
from his old style powder horn a charge of powder
into the pan of his flint lock. The statue is to be
placed upon a pedestal of plain granite, six feet
high, at a point about half way between Framing-
ham Center and South Framingham.

John Rogers, who died recently at New
Canaan, Conn., was well-known as a sculptor of
some fifty groups of American and patriotic sub-
jects. Mr. Rogers was born in Salem, Mass., in
1829, but spent the greater part of his life in this
city. He learned the trade of machinist in his
youth and took up modeling, -upon seeing a work-
man engaged over some simple figures in clay. He
concluded that he could do the same thing, went
to work in all seriousness, and produced his first
work, Checkers at the Farm. Most of his groups
were cast in bronze.

It is expected some time this month to hold the
dedication ceremonies for the Ray Memorial
Library, at Franklin, Mass., upon the mural
decorations of which Henry Flammond Gallison
and Tommaso Juglaris have been engaged at the
former’s studio at Annisquam. The frieze for
the Memorial Hall, on which Mr. Juglaris has been
recently engaged, represents the hours of day and
night, the figures-forming a procession about the hall.
Mr. Hammond Gallison has recently been at
work on a frieze for the Delivery Room consisting
of four panels called the Deserts of the World. The
first is an American Desert, the second a Mexican,

the third an Arabian, shown by moonlight with a
caravan.

Samuel Putnam Avery, for nearly half a cen-
tury one of the best known figures in the New York
art circles, who died at his home in this city
recently at the age of eighty-three, will long be
remembered for his public gifts, notably the fine
Avery Architecture Library, of Columbia Univer-
sity, which he founded as a memorial to his son;
the valuable collection of prints bearing his name
given to the New York Public Library, and the
collection of Oriental designs given to the Metro-
politan Museum. Mr. Avery was born in New
York in 1822. While still in his teens he became
an engraver on copper and wood. He knew most of
the American artists of his day personally, and
presently gave up engraving to become a dealer in
works of art. His business, established thirty-
nine years ago at Fourth Avenue and Broadway,
was later removed to Fifth Avenue, and since his
retirement in 1885 has been conducted by his son.
Mr. Avery was one of the original committee of
the Metropolitan Museum for the erection of the
Bartholdi Statue of Liberty.

Book reviews.
Constable’s Sketches in Oil and
Water Colours. With Biographical
Note and Sketch of Constable’s Art, by
Sir James D. Linton, R.I. Pages: Text xiv.;
64 full-page illustraions in half-tone ; two in
colour. New York: Frederick Warne & Co.
This book is one of that well-designed and useful
series known as “Newnes’ Art Library,” of which
we have already had under consideration the vol-
umes on Botticelli and Benozzo Gozzoli, opening
with merely cursory, but authoritative, sketches of
the life and work of its subject, each volume com-
prises a collection of well-chosen and well-printed
examples of the painter’s art, in half-tone. It is to
be regretted that the publishers have included two
very inferior examples of colour reproduction, which
are quite valueless to the student, and cannot fail
to strike any reader of taste as artistically worthless.
However, excepting as an eyesore, they do not
impair the real value of the main object of the book,
which constitutes a compact treatise on the special
phase of the great English landscape painter’s art,
to which it is devoted. While his training necessi-
tated several years of London life, as a student at
the Royal Academy, the haunting beauty of his
native Suffolk scenery never permitted him to
become a Londoner. His artist soul dwelt among