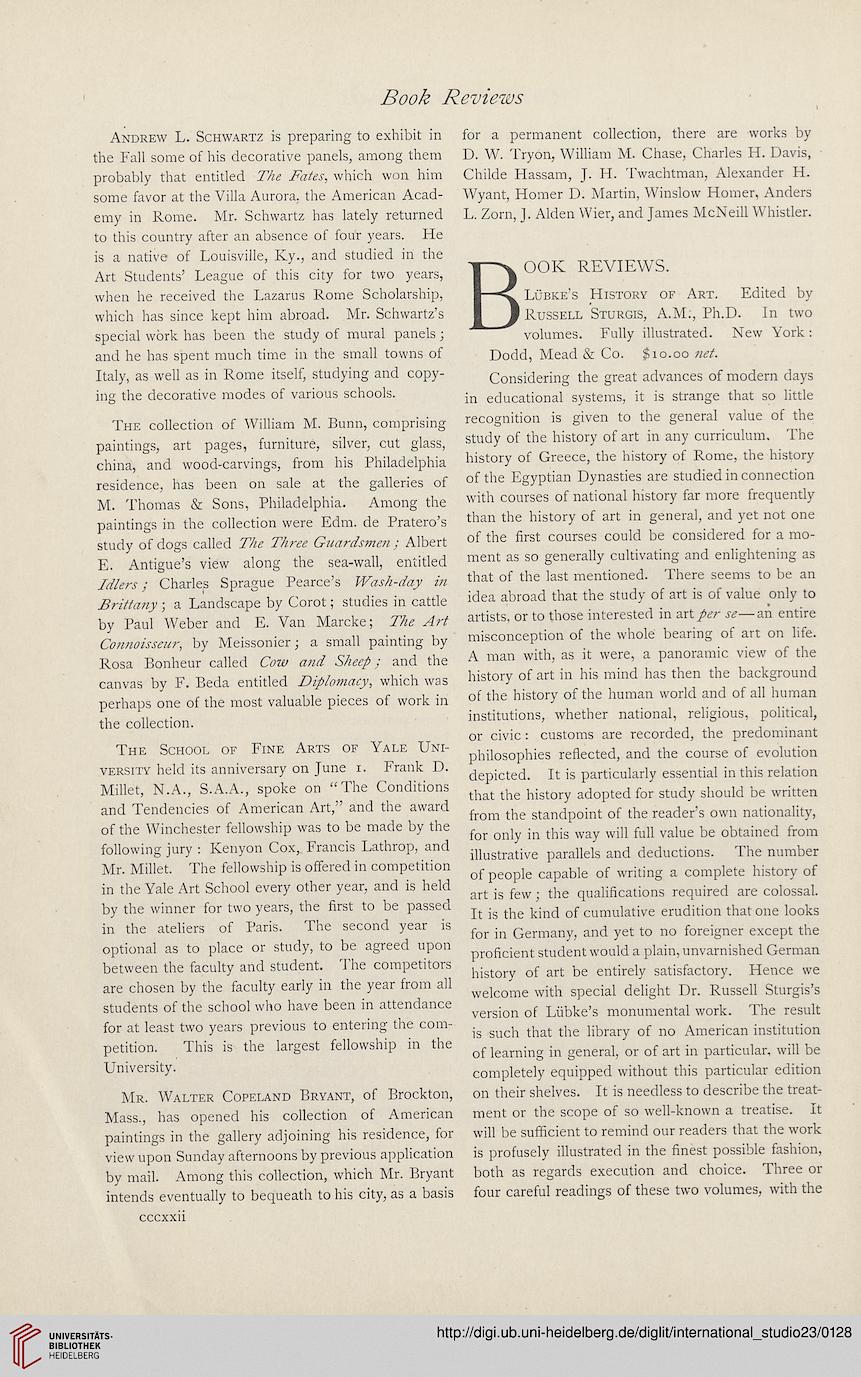 Andrew L. Schwartz is preparing to exhibit in
the Fall some of his decorative panels, among them
probably that entitled The Fates, which won him
some favor at the Villa Aurora, the American Acad-
emy in Rome. Mr. Schwartz has lately returned
to this country after an absence of four years. He
is a native of Louisville, Ky., and studied in the
Art Students’ League of this city for two years,
when he received the Lazarus Rome Scholarship,
which has since kept him abroad. Mr. Schwartz’s
special work has been the study of mural panels;
and he has spent much time in the small towns of
Italy, as well as in Rome itself, studying and copy-
ing the decorative modes of various schools.
The collection of William M. Bunn, comprising
paintings, art pages, furniture, silver, cut glass,
china, and wood-carvings, from his Philadelphia
residence, has been on sale at the galleries of
M. Thomas & Sons, Philadelphia. Among the
paintings in the collection were Edm. de Pratero’s
study of dogs called The Three Guardsmen ; Albert
E. Antigue’s view along the sea-wall, entitled
Idlers; Charles Sprague Pearce’s Wash-day in
Brittany ; a Landscape by Corot; studies in cattle
by Paul Weber and E. Van Marcke; The Art
Connoisseur, by Meissonier; a small painting by
Rosa Bonheur called Cow and Sheep; and the
canvas by F. Beda entitled Diplomacy, which was
perhaps one of the most valuable pieces of work in
the collection.
The School of Fine Arts of Yale Uni-
versity held its anniversary on June i. Frank D.
Millet, N.A., S.A.A., spoke on “The Conditions
and Tendencies of American Art,” and the award
of the Winchester fellowship was to be made by the
following jury : Kenyon Cox, Francis Lathrop, and
Mr. Millet. The fellowship is offered in competition
in the Yale Art School every other year, and is held
by the winner for two years, the first to be passed
in the ateliers of Paris. The second year is
optional as to place or study, to be agreed upon
between the faculty and student. The competitors
are chosen by the faculty early in the year from all
students of the school who have been in attendance
for at least two years previous to entering the com-
petition. This is the largest fellowship in the
University.
Mr. Walter Copeland Bryant, of Brockton,
Mass., has opened his collection of American
paintings in the gallery adjoining his residence, for
view upon Sunday afternoons by previous application
by mail. Among this collection, which Mr. Bryant
intends eventually to bequeath to his city, as a basis
cccxxii

for a permanent collection, there are works by
D. W. Tryon, William M. Chase, Charles H. Davis,
Childe Hassam, J. H. Twachtman, Alexander H.
Wyant, Homer D. Martin, Winslow Homer, Anders
L. Zorn, J. Alden Wier, and James McNeill Whistler.
OOK REVIEWS.
Lubke’s History of Art. Edited by
Russell Sturgis, A.M;, Ph.D. In two
volumes. Fully illustrated. New York:
Dodd, Mead & Co. $10 .00 net.
Considering the great advances of modern days
in educational systems, it is strange that so little
recognition is given to the general value of the
study of the history of art in any curriculum. The
history of Greece, the history of Rome, the history
of the Egyptian Dynasties are studied in connection
with courses of national history far more frequently
than the history of art in general, and yet not one
of the first courses could be considered for a mo-
ment as so generally cultivating and enlightening as
that of the last mentioned. There seems to be an
idea abroad that the study of art is of value only to
artists, or to those interested in art per se— an entire
misconception of the whole bearing of art on life.
A man with, as it were, a panoramic view of the
history of art in his mind has then the background
of the history of the human world and of all human
institutions, whether national, religious, political,
or civic: customs are recorded, the predominant
philosophies reflected, and the course of evolution
depicted. It is particularly essential in this relation
that the history adopted for study should be written
from the standpoint of the reader’s own nationality,
for only in this way will full value be obtained from
illustrative parallels and deductions. The number
of people capable of writing a complete history of
art is few; the qualifications required are colossal.
It is the kind of cumulative erudition that one looks
for in Germany, and yet to no foreigner except the
proficient student would a plain, unvarnished German
history of art be entirely satisfactory. Hence we
welcome with special delight Dr. Russell Sturgis’s
version of Lubke’s monumental work. The result
is such that the library of no American institution
of learning in general, or of art in particular, will be
completely equipped without this particular edition
on their shelves. It is needless to describe the treat-
ment or the scope of so well-known a treatise. It
will be sufficient to remind our readers that the work
is profusely illustrated in the finest possible fashion,
both as regards execution and choice. Three or
four careful readings of these two volumes, with the