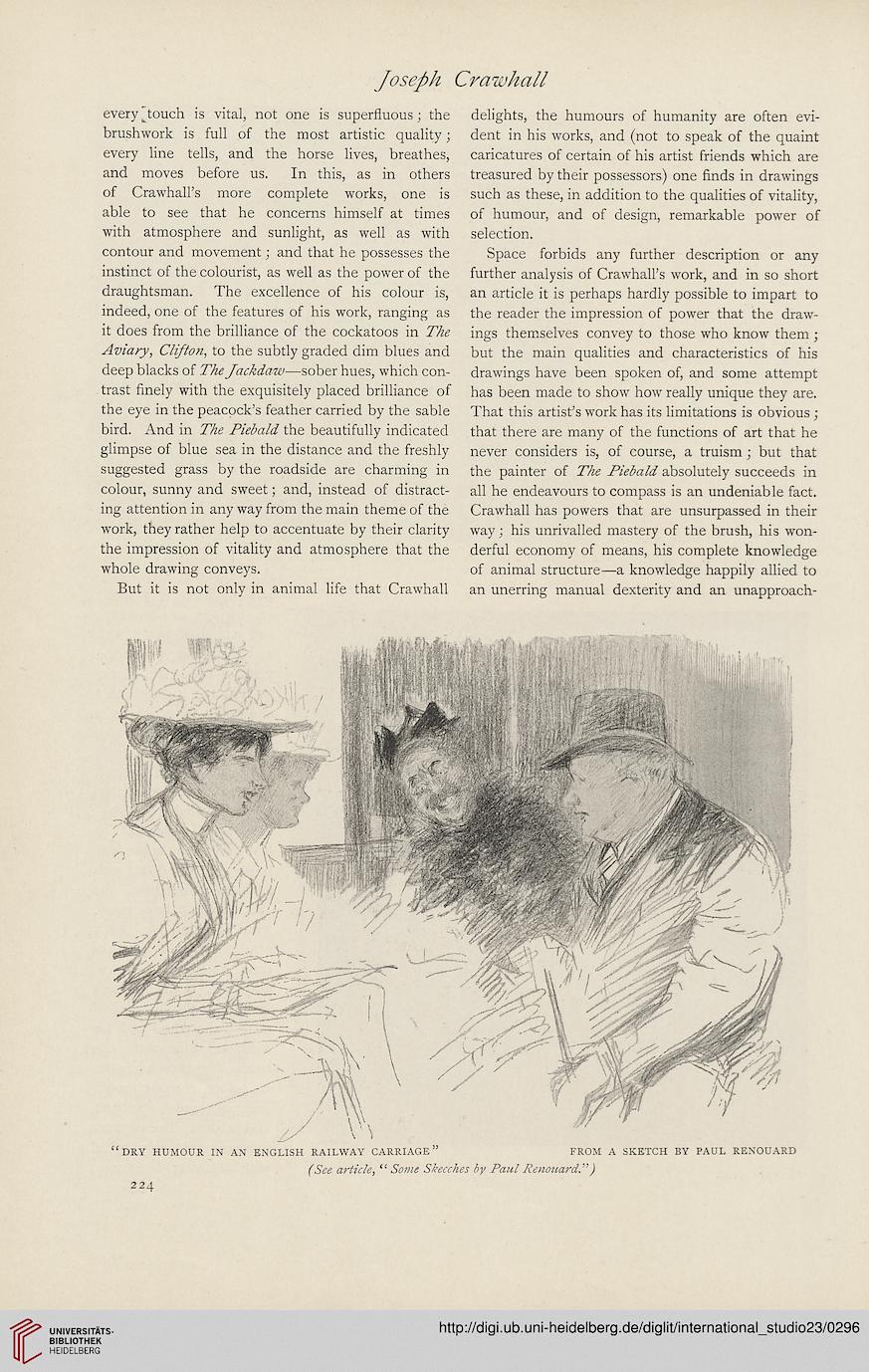 every'touch is vital, not one is superfluous; the
brushwork is full of the most artistic quality;
every line tells, and the horse lives, breathes,
and moves before us. In this, as in others
of Crawhall’s more complete works, one is
able to see that he concerns himself at times
with atmosphere and sunlight, as well as with
contour and movement; and that he possesses the
instinct of the colourist, as well as the power of the
draughtsman. The excellence of his colour is,
indeed, one of the features of his work, ranging as
it does from the brilliance of the cockatoos in The
Aviary, Clifton, to the subtly graded dim blues and
deep blacks of The Jackdaw—sober hues, which con-
trast finely with the exquisitely placed brilliance of
the eye in the peacock’s feather carried by the sable
bird. And in The Piebald the beautifully indicated
glimpse of blue sea in the distance and the freshly
suggested grass by the roadside are charming in
colour, sunny and sweet; and, instead of distract-
ing attention in any way from the main theme of the
work, they rather help to accentuate by their clarity
the impression of vitality and atmosphere that the
whole drawing conveys.
But it is not only in animal life that Crawhall

delights, the humours of humanity are often evi-
dent in his works, and (not to speak of the quaint
caricatures of certain of his artist friends which are
treasured by their possessors) one finds in drawings
such as these, in addition to the qualities of vitality,
of humour, and of design, remarkable power of
selection.
Space forbids any further description or any
further analysis of Crawhall’s work, and in so short
an article it is perhaps hardly possible to impart to
the reader the impression of power that the draw-
ings themselves convey to those who know them ;
but the main qualities and characteristics of his
drawings have been spoken of, and some attempt
has been made to show how really unique they are.
That this artist’s work has its limitations is obvious ;
that there are many of the functions of art that he
never considers is, of course, a truism; but that
the painter of The Piebald absolutely succeeds in
all he endeavours to compass is an undeniable fact.
Crawhall has powers that are unsurpassed in their
way; his unrivalled mastery of the brush, his won-
derful economy of means, his complete knowledge
of animal structure—a knowledge happily allied to
an unerring manual dexterity and an unapproach-


“DRY HUMOUR IN AN ENGLISH RAILWAY CARRIAGE” FROM A SKETCH BY PAUL RENOUARD
(See article, “Some Speeches by Paid Renottard.” )