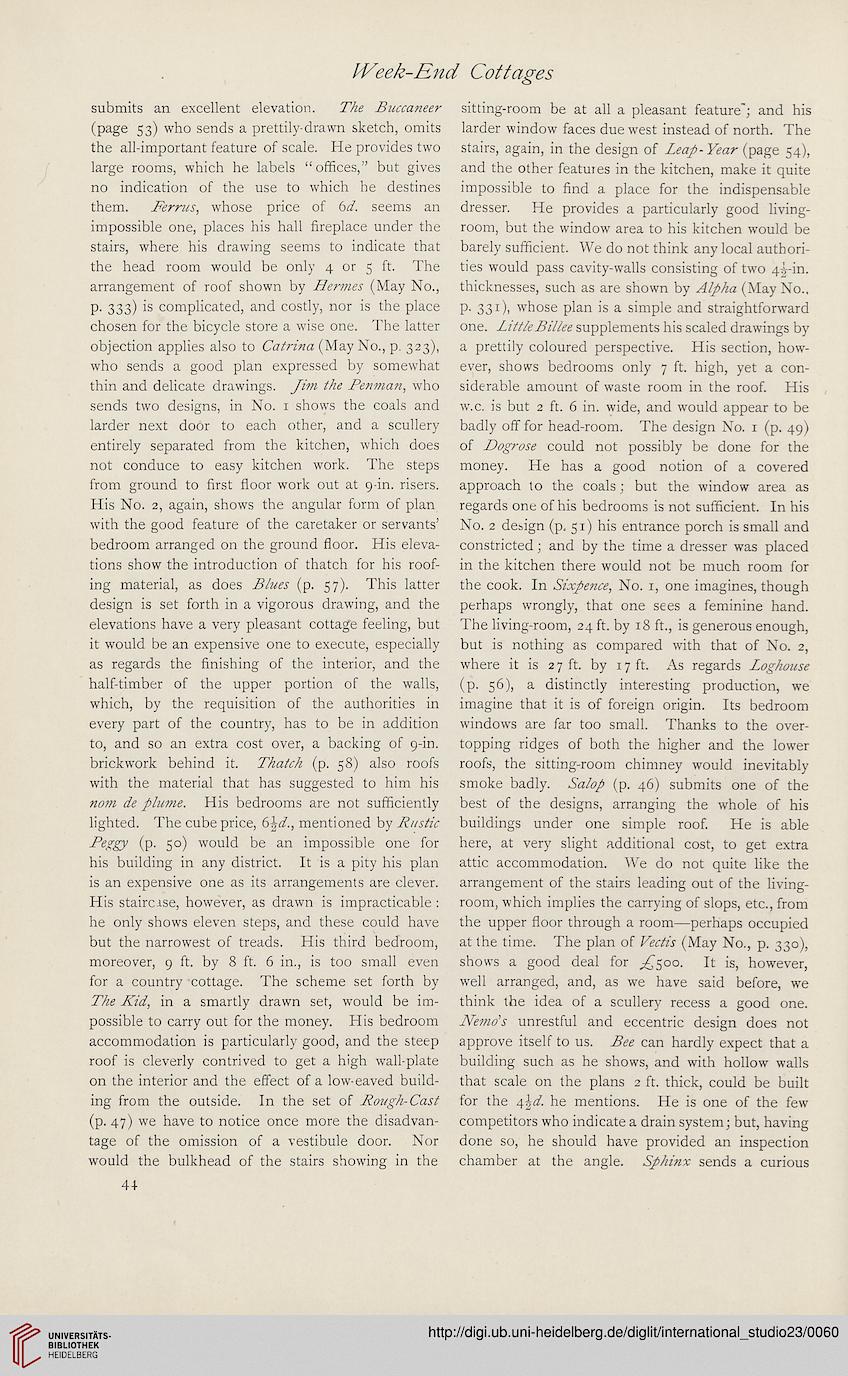 submits an excellent elevation. The Buccaneer
(page 53) who sends a prettily-drawn sketch, omits
the all-important feature of scale. He provides two
large rooms, which he labels “offices,” but gives
no indication of the use to which he destines
them. Berras, whose price of 6d. seems an
impossible one, places his hall fireplace under the
stairs, where his drawing seems to indicate that
the head room would be only 4 or 5 ft. The
arrangement of roof shown by Hermes (May No.,
p. 333) is complicated, and costly, nor is the place
chosen for the bicycle store a wise one. The latter
objection applies also to Catrina (May No., p. 323),
who sends a good plan expressed by somewhat
thin and delicate drawings. Jim the Penman, who
sends two designs, in No. 1 shows the coals and
larder next door to each other, and a scullery
entirely separated from the kitchen, which does
not conduce to easy kitchen work. The steps
from ground to first floor work out at 9-in. risers.
His No. 2, again, shows the angular form of plan
with the good feature of the caretaker or servants’
bedroom arranged on the ground floor. His eleva-
tions show the introduction of thatch for his roof-
ing material, as does Blues (p. 57). This latter
design is set forth in a vigorous drawing, and the
elevations have a very pleasant cottage feeling, but
it would be an expensive one to execute, especially
as regards the finishing of the interior, and the
half-timber of the upper portion of the walls,
which, by the requisition of the authorities in
every part of the country, has to be in addition
to, and so an extra cost over, a backing of 9-in.
brickwork behind it. Thatch (p. 58) also roofs
with the material that has suggested to him his
nom de plitme. His bedrooms are not sufficiently
lighted. The cube price, 6\d., mentioned by Rustic
Peggy (p. 50) would be an impossible one for
his building in any district. It is a pity his plan
is an expensive one as its arrangements are clever.
His staircase, however, as drawn is impracticable :
he only shows eleven steps, and these could have
but the narrowest of treads. His third bedroom,
moreover, 9 ft. by 8 ft. 6 in., is too small even
for a country cottage. The scheme set forth by
The Kid, in a smartly drawn set, would be im-
possible to carry out for the money. His bedroom
accommodation is particularly good, and the steep
roof is cleverly contrived to get a high wall-plate
on the interior and the effect of a low-eaved build-
ing from the outside. In the set of Rough-Cast
(p. 47) we have to notice once more the disadvan-
tage of the omission of a vestibule door. Nor
would the bulkhead of the stairs showing in the

sitting-room be at all a pleasant feature'; and his
larder window faces due west instead of north. The
stairs, again, in the design of Leap-Year (page 54),
and the other features in the kitchen, make it quite
impossible to find a place for the indispensable
dresser. He provides a particularly good living-
room, but the window area to his kitchen would be
barely sufficient. We do not think any local authori-
ties would pass cavity-walls consisting of two 4^-in.
thicknesses, such as are shown by Alpha (May No.,
p. 331), whose plan is a simple and straightforward
one. LittleBillee supplements his scaled drawings by
a prettily coloured perspective. His section, how-
ever, shows bedrooms only 7 ft. high, yet a con-
siderable amount of waste room in the roof. His
w.c. is but 2 ft. 6 in. wide, and would appear to be
badly off for head-room. The design No. 1 (p. 49)
of Dogrose could not possibly be done for the
money. He has a good notion of a covered
approach to the coals; but the window area as
regards one of his bedrooms is not sufficient. In his
No. 2 design (p. 51) his entrance porch is small and
constricted; and by the time a dresser was placed
in the kitchen there would not be much room for
the cook. In Sixpence, No. 1, one imagines, though
perhaps wrongly, that one sees a feminine hand.
The living-room, 24 ft. by 18 ft., is generous enough,
but is nothing as compared with that of No. 2,
where it is 27 ft. by 17 ft. As regards Loghouse
(p. 56), a distinctly interesting production, we
imagine that it is of foreign origin. Its bedroom
windows are far too small. Thanks to the over-
topping ridges of both the higher and the lower
roofs, the sitting-room chimney would inevitably
smoke badly. Salop (p. 46) submits one of the
best of the designs, arranging the whole of his
buildings under one simple roof. He is able
here, at very slight additional cost, to get extra
attic accommodation. We do not quite like the
arrangement of the stairs leading out of the living-
room, which implies the carrying of slops, etc., from
the upper floor through a room—perhaps occupied
at the time. The plan of Vectis (May No., p. 330),
shows a good deal for ^500. It is, however,
well arranged, and, as we have said before, we
think the idea of a scullery recess a good one.
Nemo’s unrestful and eccentric design does not
approve itself to us. Bee can hardly expect that a
building such as he shows, and with hollow walls
that scale on the plans 2 ft. thick, could be built
for the 4\d. he mentions. He is one of the few
competitors who indicate a drain system; but, having
done so, he should have provided an inspection
chamber at the angle. Sphinx sends a curious