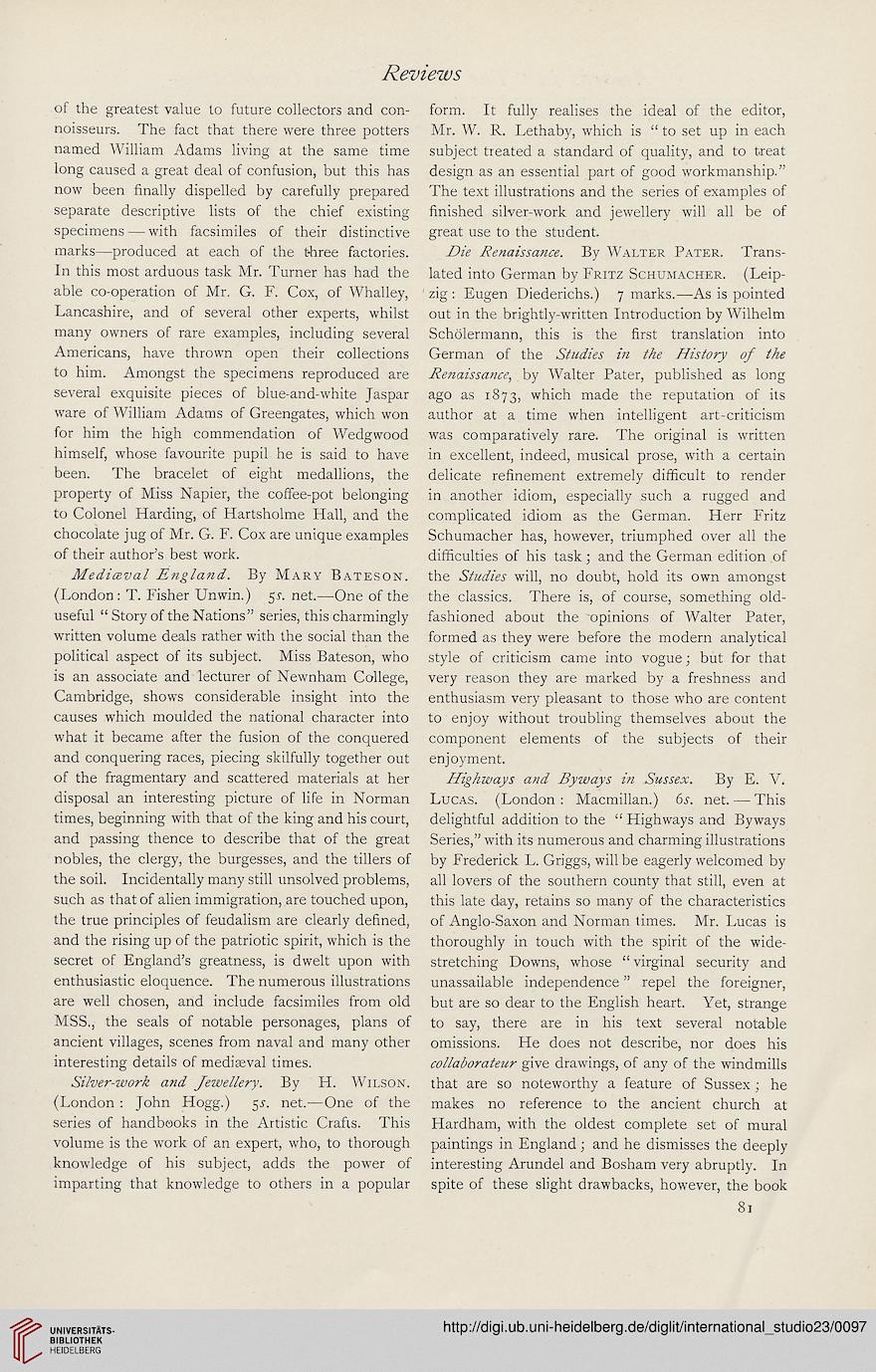 of the greatest value to future collectors and con-
noisseurs. The fact that there were three potters
named William Adams living at the same time
long caused a great deal of confusion, but this has
now been finally dispelled by carefully prepared
separate descriptive lists of the chief existing
specimens — with facsimiles of their distinctive
marks—produced at each of the three factories.
In this most arduous task Mr. Turner has had the
able co-operation of Mr. G. F. Cox, of Whalley,
Lancashire, and of several other experts, whilst
many owners of rare examples, including several
Americans, have thrown open their collections
to him. Amongst the specimens reproduced are
several exquisite pieces of blue-and-white Jaspar
ware of William Adams of Greengates, which won
for him the high commendation of Wedgwood
himself, whose favourite pupil he is said to have
been. The bracelet of eight medallions, the
property of Miss Napier, the coffee-pot belonging
to Colonel Harding, of Hartsholme Hall, and the
chocolate jug of Mr. G. F. Cox are unique examples
of their author’s best work.
Medieeval England. By Mary Bateson.
(London: T. Fisher Unwin.) 51. net.—One of the
useful “ Story of the Nations” series, this charmingly
written volume deals rather with the social than the
political aspect of its subject. Miss Bateson, who
is an associate and lecturer of Newnham College,
Cambridge, shows considerable insight into the
causes which moulded the national character into
what it became after the fusion of the conquered
and conquering races, piecing skilfully together out
of the fragmentary and scattered materials at her
disposal an interesting picture of life in Norman
times, beginning with that of the king and his court,
and passing thence to describe that of the great
nobles, the clergy, the burgesses, and the tillers of
the soil. Incidentally many still unsolved problems,
such as that of alien immigration, are touched upon,
the true principles of feudalism are clearly defined,
and the rising up of the patriotic spirit, which is the
secret of England’s greatness, is dwelt upon with
enthusiastic eloquence. The numerous illustrations
are well chosen, and include facsimiles from old
MSS., the seals of notable personages, plans of
ancient villages, scenes from naval and many other
interesting details of mediaeval times.
Silver-work and Jewellery. By H. Wilson.
(London : John Hogg.) 5.?. net.—One of the
series of handbooks in the Artistic Crafts. This
volume is the work of an expert, who, to thorough
knowledge of his subject, adds the power of
imparting that knowledge to others in a popular

form. It fully realises the ideal of the editor,
Mr. W. R. Lethaby, which is “ to set up in each
subject treated a standard of quality, and to treat
design as an essential part of good workmanship.”
The text illustrations and the series of examples of
finished silver-work and jewellery will all be of
great use to the student.
Die Renaissance. By Walter Pater. Trans-
lated into German by Fritz Schumacher. (Leip-
zig : Eugen Diederichs.) 7 marks.—As is pointed
out in the brightly-written Introduction by Wilhelm
Scholermann, this is the first translation into
German of the Studies in the History of the
Renaissance, by Walter Pater, published as long
ago as 1873, which made the reputation of its
author at a time when intelligent art-criticism
was comparatively rare. The original is written
in excellent, indeed, musical prose, with a certain
delicate refinement extremely difficult to render
in another idiom, especially such a rugged and
complicated idiom as the German. Herr Fritz
Schumacher has, however, triumphed over all the
difficulties of his task; and the German edition of
the Studies will, no doubt, hold its own amongst
the classics. There is, of course, something old-
fashioned about the opinions of Walter Pater,
formed as they were before the modern analytical
style of criticism came into vogue; but for that
very reason they are marked by a freshness and
enthusiasm very pleasant to those who are content
to enjoy without troubling themselves about the
component elements of the subjects of their
enjoyment.
Highways and Byways in Sussex. By E. V.
Lucas. (London: Macmillan.) 6s. net. — This
delightful addition to the “ Highways and Byways
Series,” with its numerous and charming illustrations
by Frederick L. Griggs, will be eagerly welcomed by
all lovers of the southern county that still, even at
this late day, retains so many of the characteristics
of Anglo-Saxon and Norman times. Mr. Lucas is
thoroughly in touch with the spirit of the wide-
stretching Downs, whose “virginal security and
unassailable independence ” repel the foreigner,
but are so dear to the English heart. Yet, strange
to say, there are in his text several notable
omissions. He does not describe, nor does his
collaborateur give drawings, of any of the windmills
that are so noteworthy a feature of Sussex ; he
makes no reference to the ancient church at
Hardham, with the oldest complete set of mural
paintings in England; and he dismisses the deeply
interesting Arundel and Bosham very abruptly. In
spite of these slight drawbacks, however, the book
81