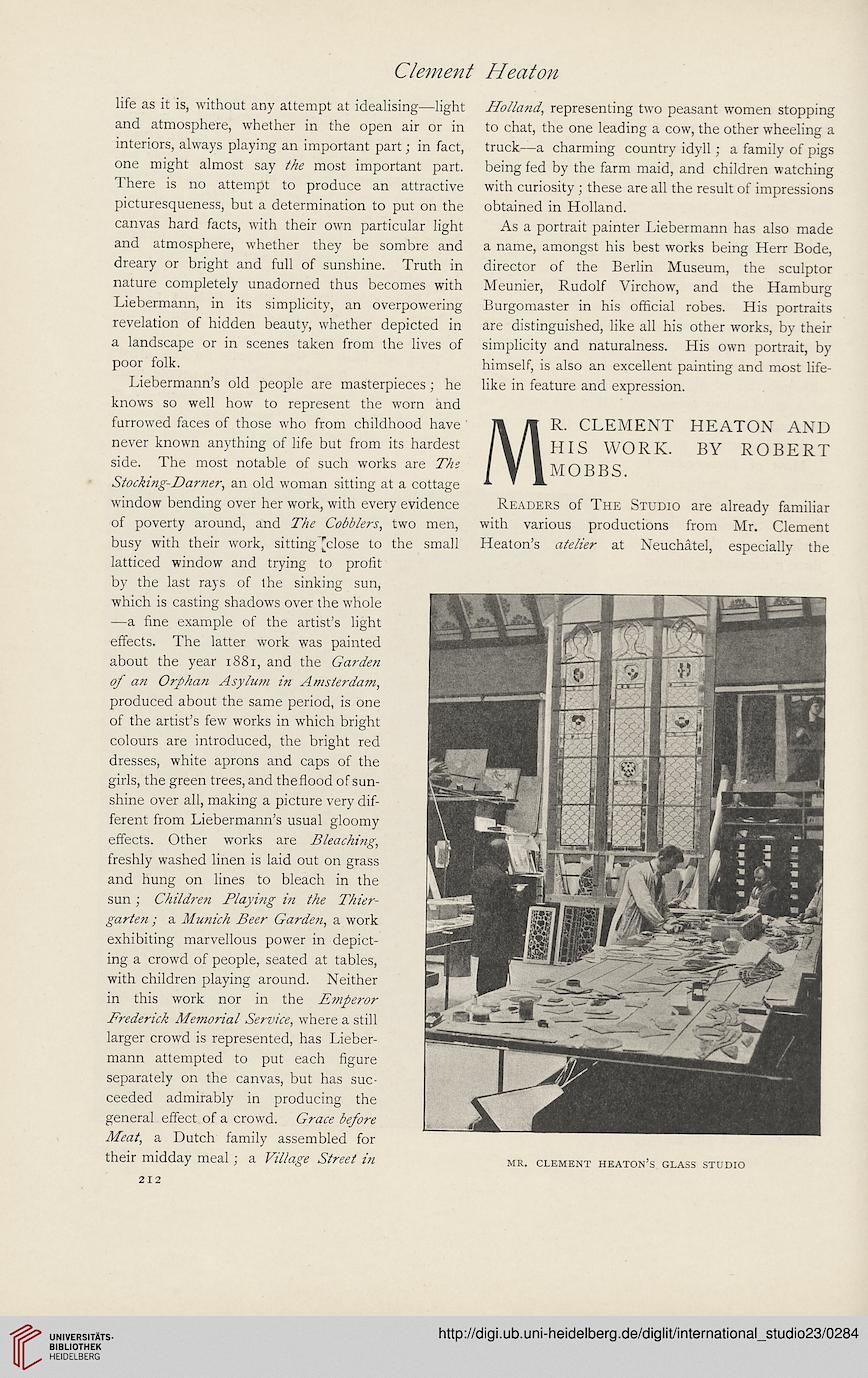 life as it is, without any attempt at idealising—light
and atmosphere, whether in the open air or in
interiors, always playing an important part; in fact,
one might almost say the most important part.
There is no attempt to produce an attractive
picturesqueness, but a determination to put on the
canvas hard facts, with their own particular light
and atmosphere, whether they be sombre and
dreary or bright and full of sunshine. Truth in
nature completely unadorned thus becomes with
Liebermann, in its simplicity, an overpowering
revelation of hidden beauty, whether depicted in
a landscape or in scenes taken from the lives of
poor folk.
Liebermann’s old people are masterpieces; he
knows so well how to represent the worn and
furrowed faces of those who from childhood have
never known anything of life but from its hardest
side. The most notable of such works are The
Stocking-Darner, an old woman sitting at a cottage
window bending over her work, with every evidence
of poverty around, and The Cobblers, two men,
busy with their work, sitting [close to the small
latticed window and trying to profit
by the last rays of the sinking sun,
which is casting shadows over the whole
—a fine example of the artist’s light
effects. The latter work was painted
about the year 1881, and the Garden
of an Orphan Asylum in Amsterdam,
produced about the same period, is one
of the artist’s few works in which bright
colours are introduced, the bright red
dresses, white aprons and caps of the
girls, the green trees, and theflood of sun-
shine over all, making a picture very dif-
ferent from Liebermann’s usual gloomy
effects. Other works are Bleaching,
freshly washed linen is laid out on grass
and hung on lines to bleach in the
sun; Childre?i Playing in the Thier-
garten ; a Munich Beer Garden, a work
exhibiting marvellous power in depict-
ing a crowd of people, seated at tables,
with children playing around. Neither
in this work nor in the Emperor
Frederick Memorial Service, where a still
larger crowd is represented, has Lieber-
mann attempted to put each figure
separately on the canvas, but has suc-
ceeded admirably in producing the
general effect of a crowd. Grace before
Meat, a Dutch family assembled for
their midday meal; a Village Street in

Holland, representing two peasant women stopping
to chat, the one leading a cow, the other wheeling a
truck—a charming country idyll; a family of pigs
being fed by the farm maid, and children watching
with curiosity ; these are all the result of impressions
obtained in Holland.
As a portrait painter Liebermann has also made
a name, amongst his best works being Herr Bode,
director of the Berlin Museum, the sculptor
Meunier, Rudolf Virchow, and the Hamburg
Burgomaster in his official robes. His portraits
are distinguished, like all his other works, by their
simplicity and naturalness. His own portrait, by
himself, is also an excellent painting and most life-
like in feature and expression.
R. CLEMENT HEATON AND
HIS WORK. BY ROBERT
MOBBS.
Readers of The Studio are already familiar
with various productions from Mr. Clement
Heaton’s atelier at Neuchatel, especially the