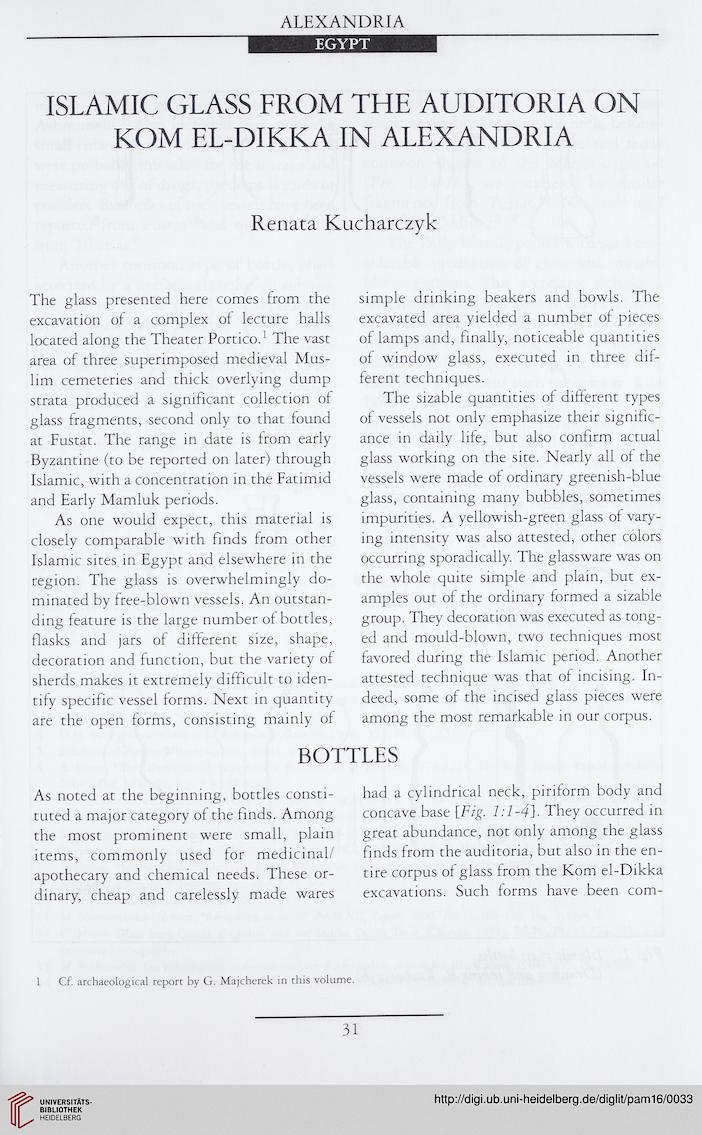 ISLAMIC GLASS FROM THE AUDITORIA ON
KOM EL-DIKKA IN ALEXANDRIA

The glass presented here comes from the
excavation of a complex of lecture halls
located along the Theater Portico.1 The vast
area of three superimposed medieval Mus-
lim cemeteries and thick overlying dump
strata produced a significant collection of
glass fragments, second only to that found
at Fustat. The range in date is from early
Byzantine (to be reported on later) through
Islamic, with a concentration in the Fatimid
and Early Mamluk periods.
As one would expect, this material is
closely comparable with finds from other
Islamic sites in Egypt and elsewhere in the
region. The glass is overwhelmingly do-
minated by free-blown vessels. An outstan-
ding feature is the large number of bottles,
flasks and jars of different size, shape,
decoration and function, but the variety of
sherds makes it extremely difficult to iden-
tify specific vessel forms. Next in quantity
are the open forms, consisting mainly of

simple drinking beakers and bowls. The
excavated area yielded a number of pieces
of lamps and, finally, noticeable quantities
of window glass, executed in three dif-
ferent techniques.
The sizable quantities of different types
of vessels not only emphasize their signific-
ance in daily life, but also confirm actual
glass working on the site. Nearly all of the
vessels were made of ordinary greenish-blue
glass, containing many bubbles, sometimes
impurities. A yellowish-green glass of vary-
ing intensity was also attested, other colors
occurring sporadically. The glassware was on
the whole quite simple and plain, but ex-
amples out of the ordinary formed a sizable
group. They decoration was executed as tong-
ed and mould-blown, two techniques most
favored during the Islamic period. Another
attested technique was that of incising. In-
deed, some of the incised glass pieces were
among the most remarkable in our corpus.

As noted at the beginning, bottles consti-
tuted a major category of the finds. Among
the most prominent were small, plain
items, commonly used for medicinal/
apothecary and chemical needs. These or-
dinary, cheap and carelessly made wares

had a cylindrical neck, piriform body and
concave base [Fig. 1:1-4]. They occurred in
great abundance, not only among the glass
finds from the auditoria, but also in the en-
tire corpus of glass from the Kom el-Dikka
excavations. Such forms have been com-

1 Cf. archaeological report by G. Majcherek in this volume.