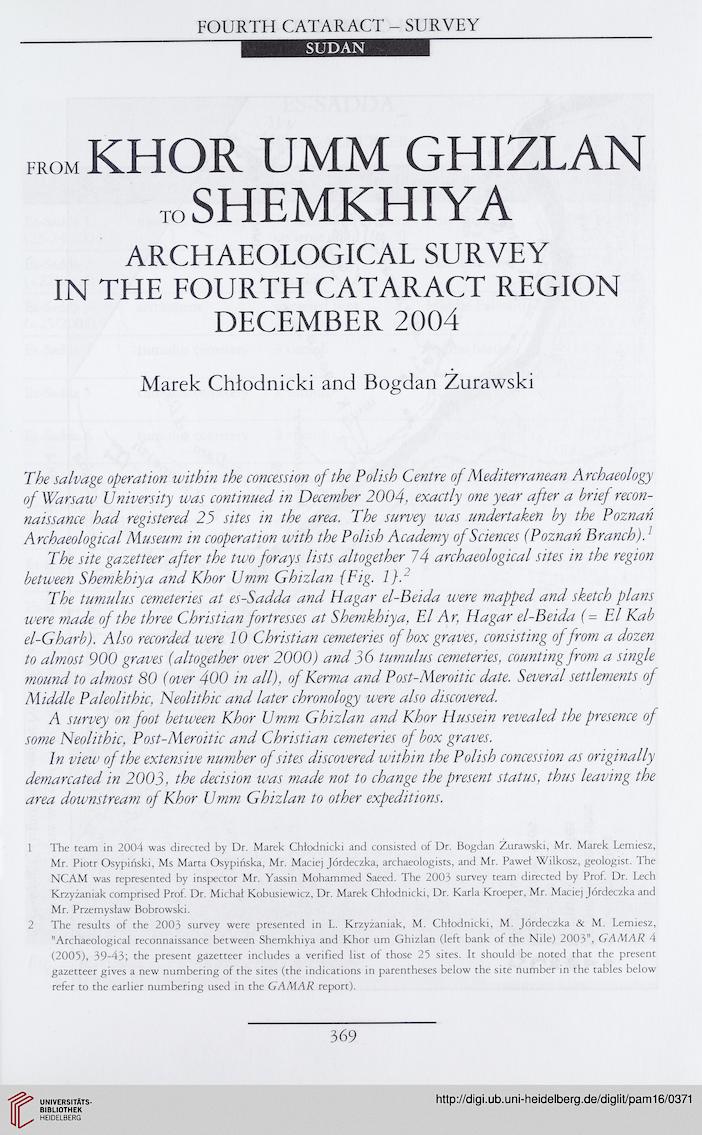 The salvage operation within the concession of the Polish Centre of Mediterranean Archaeology
of Warsaw University was continued in December 2004, exactly one year after a brief recon-
naissance had registered 25 sites in the area. The survey was undertaken by the Poznan
Archaeological Museum in cooperation with the Polish Academy of Sciences (Poznan Branch).1
The site gazetteer after the two forays lists altogether 74 archaeological sites in the region
between Shemkhiya and Khor Umm Ghizlan {Fig. I}.2
The tumulus cemeteries at es-Sadda and Hagar el-Beida were mapped and sketch plans
were made of the three Christian fortresses at Shemkhiya, FI Ar, Hagar el-Beida (= El Kab
el-Gharb). Also recorded were 10 Christian cemeteries of box graves, consisting of from a dozen
to almost 900 graves (altogether over 2000) and 36 tumulus cemeteries, counting from a single
mound to almost 80 (over 400 in all), ofKerma and Post-Meroitic date. Several settlements of
Middle Paleolithic, Neolithic and later chronology were also discovered.
A survey on foot between Khor Umm Ghizlan and Khor Hussein revealed the presence of
some Neolithic, Post-Meroitic and Christian cemeteries of box graves.
In view of the extensive number of sites discovered within the Polish concession as originally
demarcated in 2003, the decision was made not to change the present status, thus leaving the
area downstream of Khor Umm Ghizlan to other expeditions.
1 The team in 2004 was directed by Dr. Marek Chiodnicki and consisted of Dr. Bogdan Zurawski, Mr. Marek Lemiesz,
Mr. Piotr Osypinski, Ms Marta Osypinska, Mr. Maciej Jordeczka, archaeologists, and Mr. Pawei Wilkosz, geologist. The
NCAM was represented by inspector Mr. Yassin Mohammed Saeed. The 2003 survey team directed by Prof. Dr. Lech
Krzyzaniak comprised Prof. Dr. Michal Kobusiewicz, Dr. Marek Chiodnicki, Dr. Karla Kroeper, Mr. Maciej Jordeczka and
Mr. Przemyslaw Bobrowski.
2 The results of the 2003 survey were presented in L. Krzyzaniak, M. Chiodnicki, M. Jordeczka & M. Lemiesz,
"Archaeological reconnaissance between Shemkhiya and Khor um Ghizlan (left bank of the Nile) 2003", GAMAR 4
(2005), 39-43; the present gazetteer includes a verified list of those 25 sites. It should be noted that the present
gazetteer gives a new numbering of the sites (the indications in parentheses below the site number in the tables below
refer to the earlier numbering used in the GAMAR report).