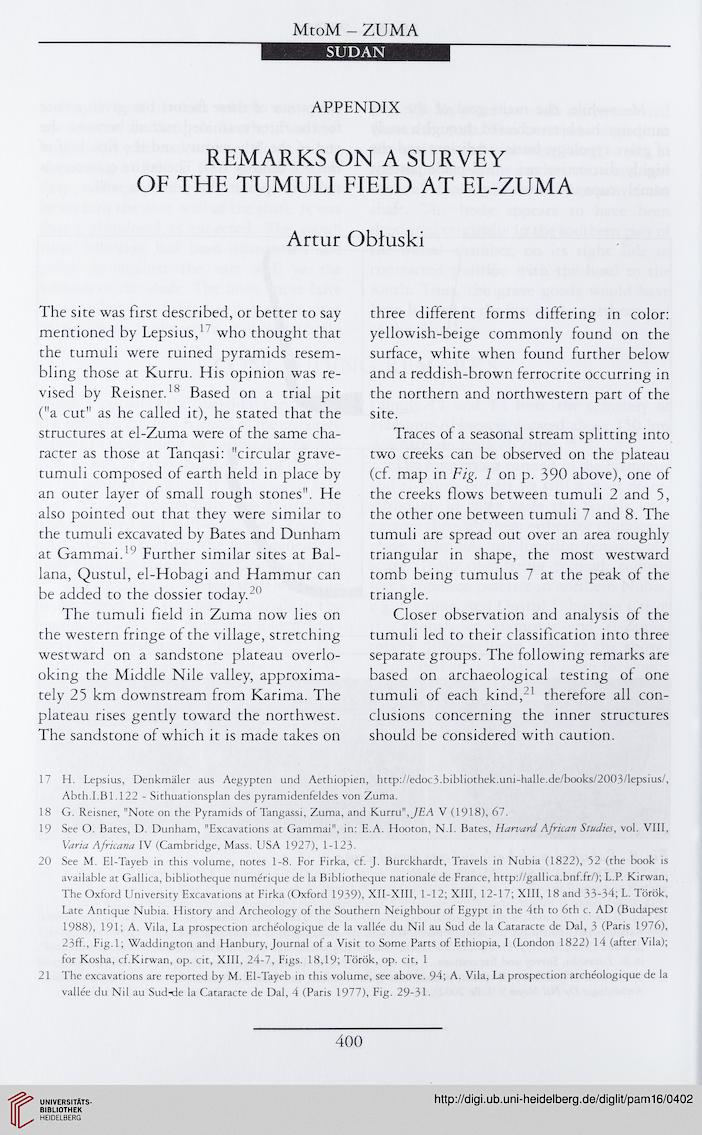 The site was first described, or better to say
mentioned by Lepsius,1' who thought that
the tumuli were ruined pyramids resem-
bling those at Kurru. His opinion was re-
vised by Reisner.18 Based on a trial pit
("a cut" as he called it), he stated that the
structures at el-Zuma were of the same cha-
racter as those at Tanqasi: "circular grave-
tumuli composed of earth held in place by
an outer layer of small rough stones". He
also pointed out that they were similar to
the tumuli excavated by Bates and Dunham
at Gammai.19 Further similar sites at Bal-
lana, Qustul, el-Hobagi and Hammur can
be added to the dossier today.20
The tumuli field in Zuma now lies on
the western fringe of the village, stretching
westward on a sandstone plateau overlo-
oking the Middle Nile valley, approxima-
tely 25 km downstream from Karima. The
plateau rises gently toward the northwest.
The sandstone of which it is made takes on

three different forms differing in color:
yellowish-beige commonly found on the
surface, white when found further below
and a reddish-brown ferrocrite occurring in
the northern and northwestern part of the
site.
Traces of a seasonal stream splitting into
two creeks can be observed on the plateau
(cf. map in Fig. 1 on p. 390 above), one of
the creeks flows between tumuli 2 and 5,
the other one between tumuli 7 and 8. The
tumuli are spread out over an area roughly
triangular in shape, the most westward
tomb being tumulus 7 at the peak of the
triangle.
Closer observation and analysis of the
tumuli led to their classification into three
separate groups. The following remarks are
based on archaeological testing of one
tumuli of each kind,21 therefore all con-
clusions concerning the inner structures
should be considered with caution.