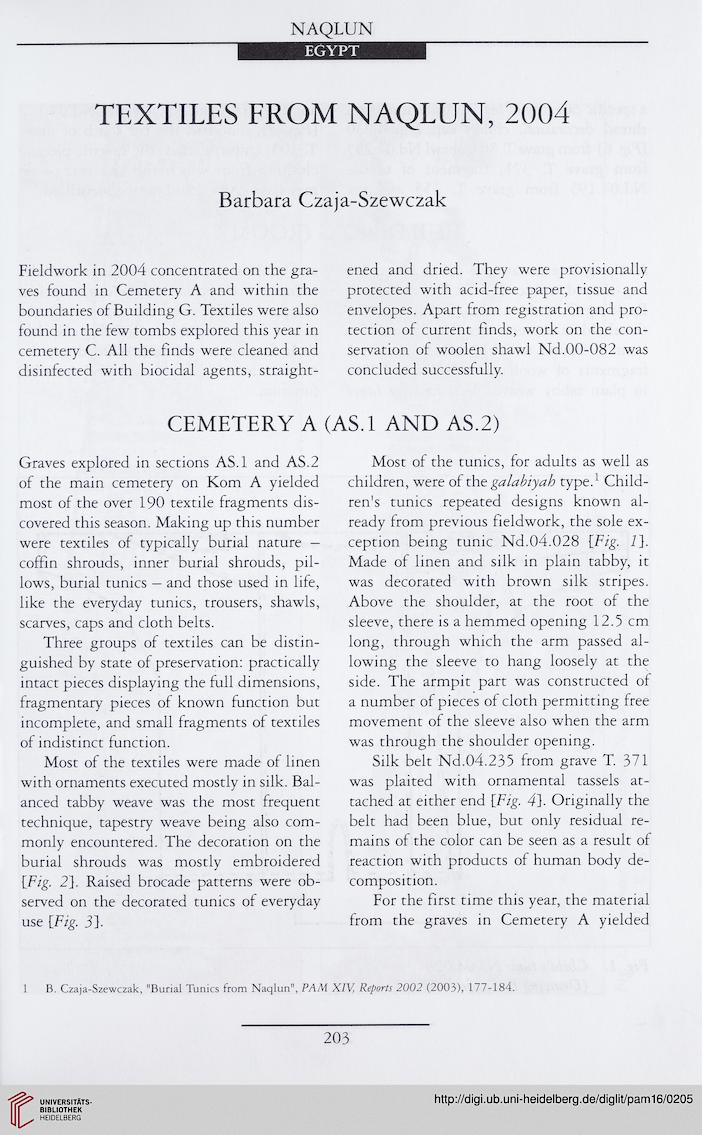 Fieldwork in 2004 concentrated on the gra-
ves found in Cemetery A and within the
boundaries of Building G. Textiles were also
found in the few tombs explored this year in
cemetery C. All the finds were cleaned and
disinfected with biocidal agents, straight-
CEMETERY A
Graves explored in sections AS.l and AS.2
of the main cemetery on Kom A yielded
most of the over 190 textile fragments dis-
covered this season. Making up this number
were textiles of typically burial nature —
coffin shrouds, inner burial shrouds, pil-
lows, burial tunics — and those used in life,
like the everyday tunics, trousers, shawls,
scarves, caps and cloth belts.
Three groups of textiles can be distin-
guished by state of preservation: practically
intact pieces displaying the full dimensions,
fragmentary pieces of known function but
incomplete, and small fragments of textiles
of indistinct function.
Most of the textiles were made of linen
with ornaments executed mostly in silk. Bal-
anced tabby weave was the most frequent
technique, tapestry weave being also com-
monly encountered. The decoration on the
burial shrouds was mostly embroidered
[Fig. 2]. Raised brocade patterns were ob-
served on the decorated tunics of everyday
use [Fig. 3).

ened and dried. They were provisionally
protected with acid-free paper, tissue and
envelopes. Apart from registration and pro-
tection of current finds, work on the con-
servation of woolen shawl Nd.00-082 was
concluded successfully.
(AS.l AND AS.2)
Most of the tunics, for adults as well as
children, were of tht galabiyah type.1 Child-
ren's tunics repeated designs known al-
ready from previous fieldwork, the sole ex-
ception being tunic Nd.04.028 [Fig. 1}.
Made of linen and silk in plain tabby, it
was decorated with brown silk stripes.
Above the shoulder, at the root of the
sleeve, there is a hemmed opening 12.5 cm
long, through which the arm passed al-
lowing the sleeve to hang loosely at the
side. The armpit part was constructed of
a number of pieces of cloth permitting free
movement of the sleeve also when the arm
was through the shoulder opening.
Silk belt Nd.04.235 from grave T. 371
was plaited with ornamental tassels at-
tached at either end [Fig. 4}. Originally the
belt had been blue, but only residual re-
mains of the color can be seen as a result of
reaction with products of human body de-
composition.
For the first time this year, the material
from the graves in Cemetery A yielded