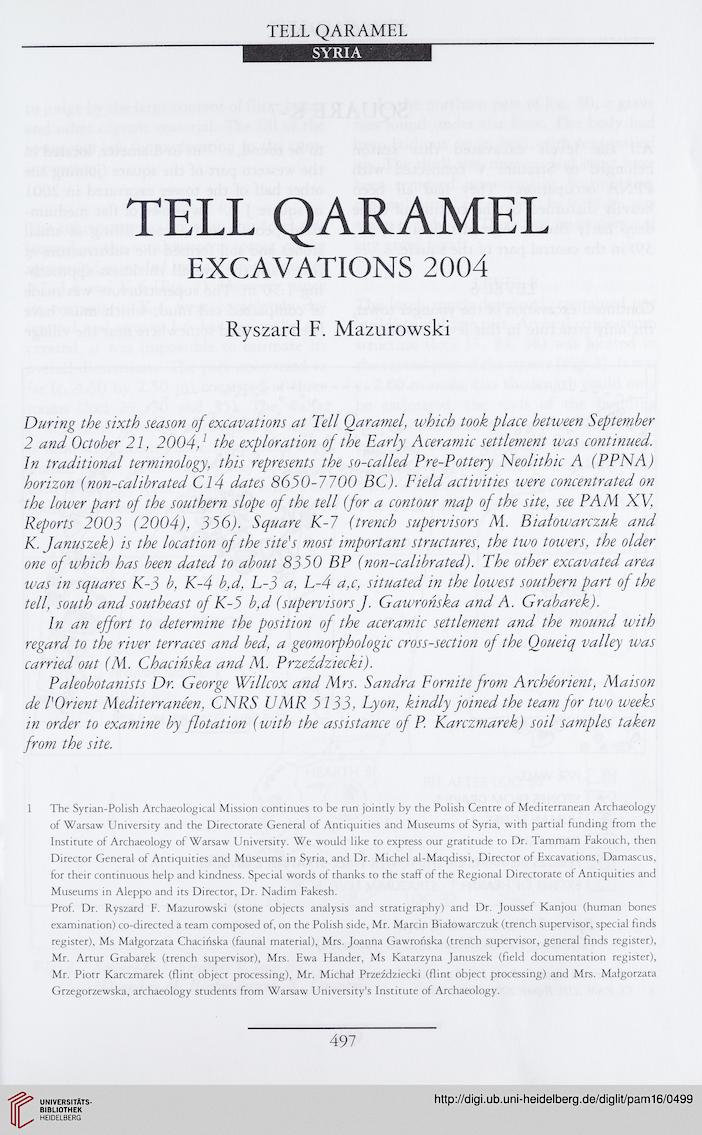 During the sixth season of excavations at Tell Qaramel, which took place between September
2 and October 21, 2004,1 the exploration of the Early Aceramic settlement was continued.
In traditional terminology, this represents the so-called Pre-Pottery Neolithic A (PPNA)
horizon (non-calibrated C14 dates 8650-7700 BC). Field activities were concentrated on
the lower part of the southern slope of the tell (for a contour map of the site, see PAM XV,
Reports 2003 (2004), 356). Square K-7 (trench supervisors M. Bialowarczuk and
K. Januszek) is the location of the site's most important structures, the two towers, the older
one of which has been dated to about 8350 BP (non-calibrated). The other excavated area
was in squares K-3 b, K-4 b,d, L-3 a, L-4 a,c, situated in the lowest southern part of the
tell, south and southeast of K-5 b,d (supervisors J. Gawronska and A. Grabarek).
In an effort to determine the position of the aceramic settlement and the mound with
regard to the river terraces and bed, a geomorphologic cross-section of the Qoueiq valley was
carried out (M. Chacihska and M. Przezdziecki).
Paleobotanists Dr. George Willcox and Mrs. Sandra Fornite from Archeorient, Maison
de /'Orient Mediterraneen, CNRS UMR 5133, Lyon, kindly joined the team for two weeks
in order to examine by flotation (with the assistance of P. Karczmarek) soil samples taken
from the site.