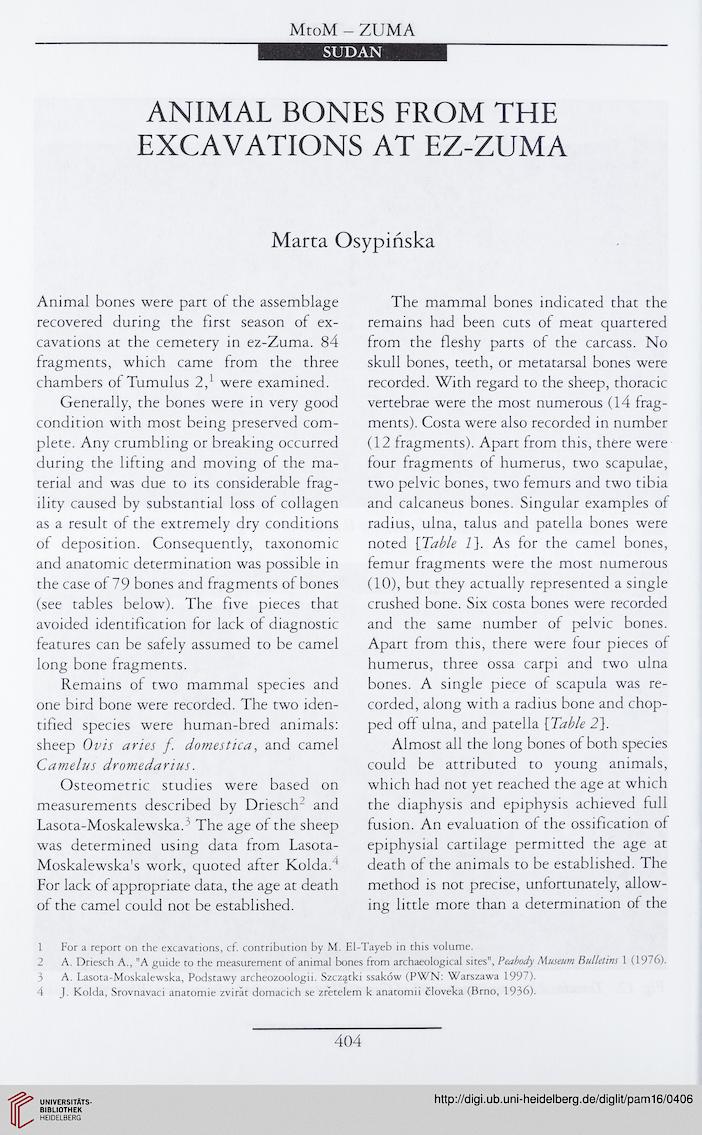 ANIMAL BONES FROM THE
EXCAVATIONS AT EZ-ZUMA

Animal bones were part of the assemblage
recovered during the first season of ex-
cavations at the cemetery in ez-Zuma. 84
fragments, which came from the three
chambers of Tumulus 2,1 were examined.
Generally, the bones were in very good
condition with most being preserved com-
plete. Any crumbling or breaking occurred
during the lifting and moving of the ma-
terial and was due to its considerable frag-
ility caused by substantial loss of collagen
as a result of the extremely dry conditions
of deposition. Consequently, taxonomic
and anatomic determination was possible in
the case of 79 bones and fragments of bones
(see tables below). The five pieces that
avoided identification for lack of diagnostic
features can be safely assumed to be camel
long bone fragments.
Remains of two mammal species and
one bird bone were recorded. The two iden-
tified species were human-bred animals:
sheep Ovis aries f. domestica, and camel
Camelus dromedarius.
Osteometric studies were based on
measurements described by Driesch2 and
Lasota-Moskalewska.3 The age of the sheep
was determined using data from Lasota-
Moskalewska's work, quoted after Kolda.4
For lack of appropriate data, the age at death
of the camel could not be established.

The mammal bones indicated that the
remains had been cuts of meat quartered
from the fleshy parts of the carcass. No
skull bones, teeth, or metatarsal bones were
recorded. With regard to the sheep, thoracic
vertebrae were the most numerous (14 frag-
ments). Costa were also recorded in number
(12 fragments). Apart from this, there were
four fragments of humerus, two scapulae,
two pelvic bones, two femurs and two tibia
and calcaneus bones. Singular examples of
radius, ulna, talus and patella bones were
noted {Table 1}. As for the camel bones,
femur fragments were the most numerous
(10), but they actually represented a single
crushed bone. Six costa bones were recorded
and the same number of pelvic bones.
Apart from this, there were four pieces of
humerus, three ossa carpi and two ulna
bones. A single piece of scapula was re-
corded, along with a radius bone and chop-
ped off ulna, and patella {Table 2].
Almost all the long bones of both species
could be attributed to young animals,
which had not yet reached the age at which
the diaphysis and epiphysis achieved full
fusion. An evaluation of the ossification of
epiphysial cartilage permitted the age at
death of the animals to be established. The
method is not precise, unfortunately, allow-
ing little more than a determination of the