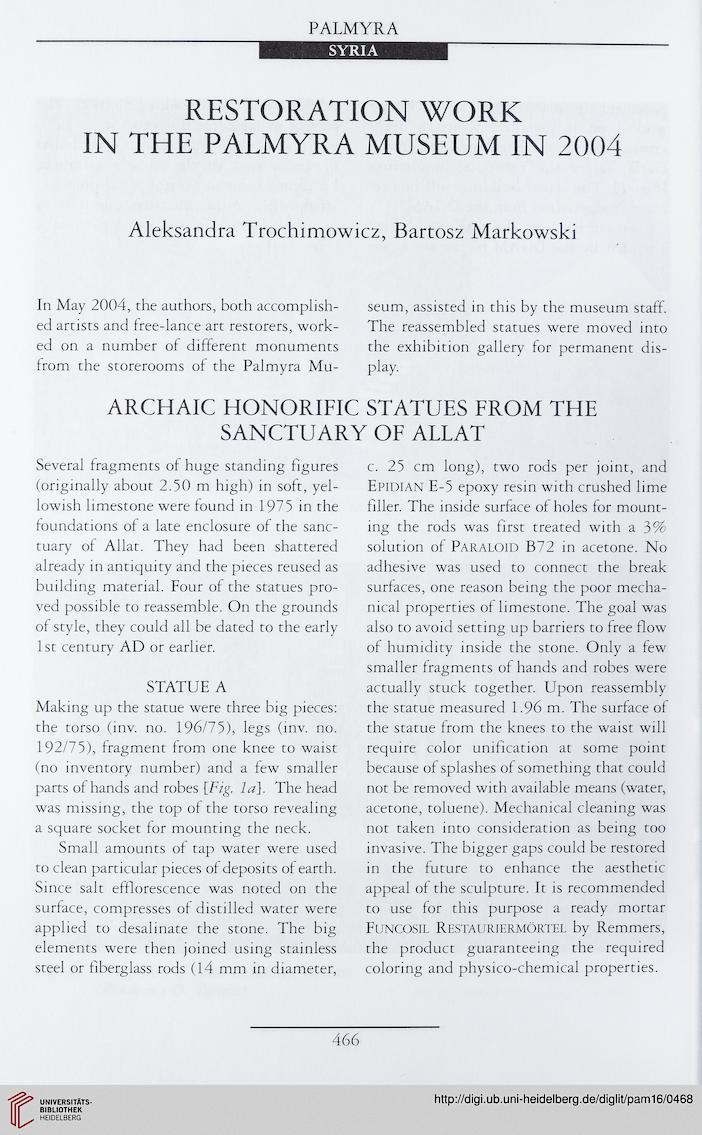 RESTORATION WORK
IN THE PALMYRA MUSEUM IN 2004

In May 2004, the authors, both accomplish-
ed artists and free-lance art restorers, work-
ed on a number of different monuments
from the storerooms of the Palmyra Mu-

seum, assisted in this by the museum staff.
The reassembled statues were moved into
the exhibition gallery for permanent dis-
play.

ARCHAIC HONORIFIC STATUES FROM THE
SANCTUARY OF ALLAT

Several fragments of huge standing figures
(originally about 2.50 m high) in soft, yel-
lowish limestone were found in 1975 in the
foundations of a late enclosure of the sanc-
tuary of Allat. They had been shattered
already in antiquity and the pieces reused as
building material. Four of the statues pro-
ved possible to reassemble. On the grounds
of style, they could all be dated to the early
1st century AD or earlier.
STATUE A
Making up the statue were three big pieces:
the torso (inv. no. 196/75), legs (inv. no.
192/75), fragment from one knee to waist
(no inventory number) and a few smaller
parts of hands and robes {Fig. la}. The head
was missing, the top of the torso revealing
a square socket for mounting the neck.
Small amounts of tap water were used
to clean particular pieces of deposits of earth.
Since salt efflorescence was noted on the
surface, compresses of distilled water were
applied to desalinate the stone. The big
elements were then joined using stainless
steel or fiberglass rods (14 mm in diameter,

c. 25 cm long), two rods per joint, and
Epidian E-5 epoxy resin with crushed lime
filler. The inside surface of holes for mount-
ing the rods was first treated with a 3%
solution of Paraloid B72 in acetone. No
adhesive was used to connect the break
surfaces, one reason being the poor mecha-
nical properties of limestone. The goal was
also to avoid setting up barriers to free flow
of humidity inside the stone. Only a few
smaller fragments of hands and robes were
actually stuck together. Upon reassembly
the statue measured 1.96 m. The surface of
the statue from the knees to the waist will
require color unification at some point
because of splashes of something that could
not be removed with available means (water,
acetone, toluene). Mechanical cleaning was
not taken into consideration as being too
invasive. The bigger gaps could be restored
in the future to enhance the aesthetic
appeal of the sculpture. It is recommended
to use for this purpose a ready mortar
Funcosil Restauriermortel by Remmers,
the product guaranteeing the required
coloring and physico-chemical properties.