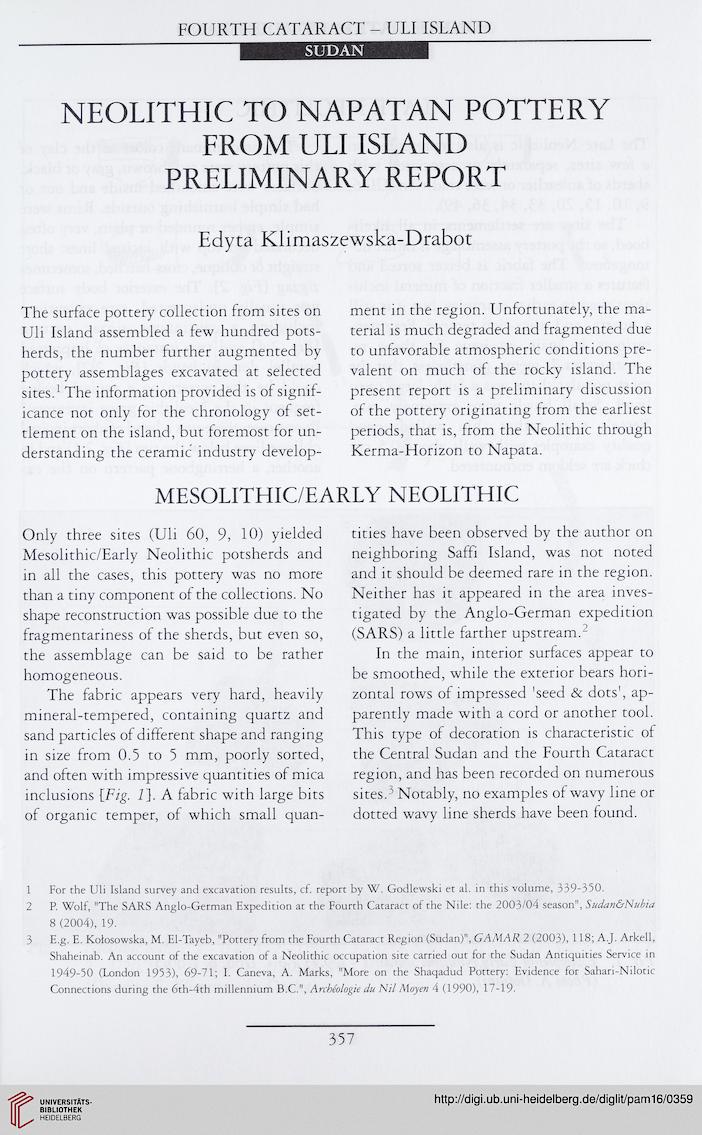 The surface pottery collection from sites on
Uli Island assembled a few hundred pots-
herds, the number further augmented by
pottery assemblages excavated at selected
sites.1 The information provided is of signif-
icance not only for the chronology of set-
tlement on the island, but foremost for un-
derstanding the ceramic industry develop-

ment in the region. Unfortunately, the ma-
terial is much degraded and fragmented due
to unfavorable atmospheric conditions pre-
valent on much of the rocky island. The
present report is a preliminary discussion
of the pottery originating from the earliest
periods, that is, from the Neolithic through
Kerma-Horizon to Napata.

Only three sites (Uli 60, 9, 10) yielded
Mesolithic/Early Neolithic potsherds and
in all the cases, this pottery was no more
than a tiny component of the collections. No
shape reconstruction was possible due to the
fragmentariness of the sherds, but even so,
the assemblage can be said to be rather
homogeneous.
The fabric appears very hard, heavily
mineral-tempered, containing quartz and
sand particles of different shape and ranging
in size from 0.5 to 5 mm, poorly sorted,
and often with impressive quantities of mica
inclusions [Fig. 2]. A fabric with large bits
of organic temper, of which small quan-

tities have been observed by the author on
neighboring Saffi Island, was not noted
and it should be deemed rare in the region.
Neither has it appeared in the area inves-
tigated by the Anglo-German expedition
(SARS) a little farther upstream.2
In the main, interior surfaces appear to
be smoothed, while the exterior bears hori-
zontal rows of impressed 'seed & dots', ap-
parently made with a cord or another tool.
This type of decoration is characteristic of
the Central Sudan and the Fourth Cataract
region, and has been recorded on numerous
sites.3 Notably, no examples of wavy line or
dotted wavy line sherds have been found.