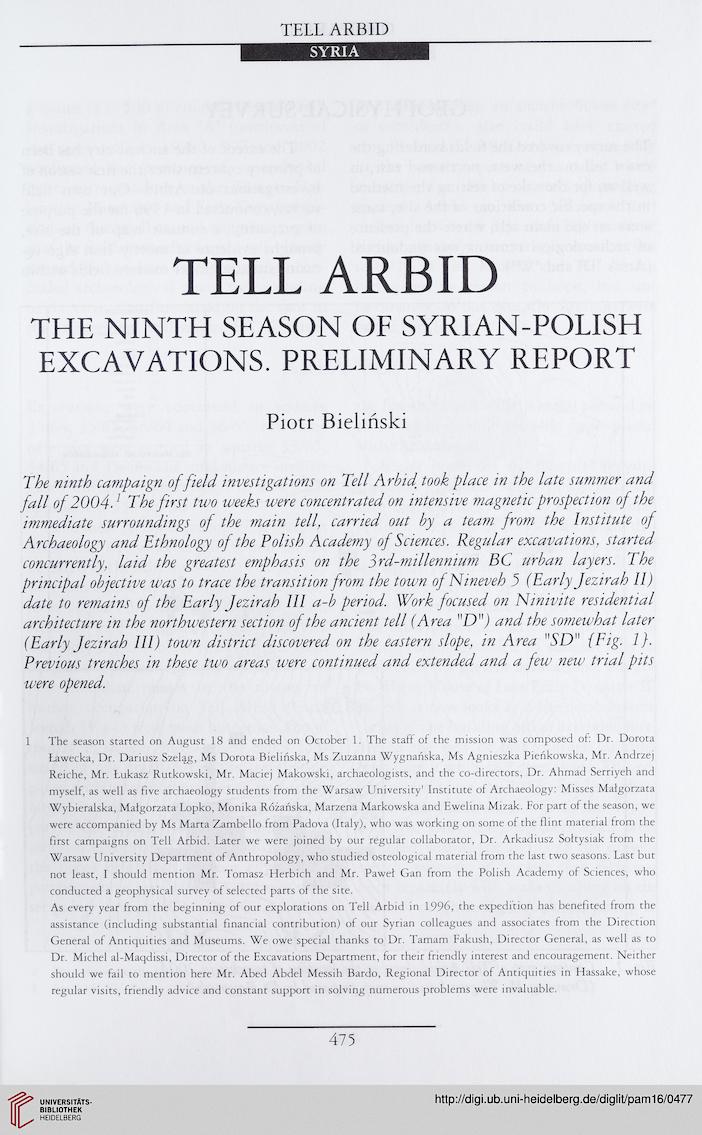 The ninth campaign of field investigations on Tell Arbid. took place in the late summer and
fall of2004.1 The first two weeks were concentrated on intensive magnetic prospection of the
immediate surroundings of the main tell, carried out by a team from the Institute of
Archaeology and Ethnology of the Polish Academy of Sciences. Regular excavations, started
concurrently, laid the greatest emphasis on the 3 rd-millenmum BC urban layers. The
principal objective was to trace the transition from the town of Nineveh 3 (Early Jezirah II)
date to remains of the Early Jezirah III a-b period. Work focused on Ninivite residential
architecture in the northwestern section of the ancient tell (Area "D") and the somewhat later
(Early Jezirah III) town district discovered on the eastern slope, in Area "SD" {Fig. 1).
Previous trenches in these two areas were continued and extended and a few new trial pits
were opened.
1 The season started on August 18 and ended on October 1. The staff of the mission was composed of: Dr. Dorota
Lawecka, Dr. Dariusz Szel|g, Ms Dorota Bielinska, Ms Zuzanna Wygnanska, Ms Agnieszka Pienkowska, Mr. Andrzej
Reiche, Mr. Lukasz Rutkowski, Mr. Maciej Makowski, archaeologists, and the co-directors, Dr. Ahmad Serriyeh and
myself, as well as five archaeology students from the Warsaw University' Institute of Archaeology: Misses Malgorzata
Wybieralska, Malgorzata Lopko, Monika Rozanska, Marzena Markowska and Ewelina Mizak. For part of the season, we
were accompanied by Ms Marta Zambello from Padova (Italy), who was working on some of the flint material from the
first campaigns on Tell Arbid. Later we were joined by our regular collaborator. Dr. Arkadiusz Soltysiak from the
Warsaw University Department of Anthropology, who studied osteological material from the last two seasons. Last but
not least, I should mention Mr. Tomasz Herbich and Mr. Pawel Gan from the Polish Academy of Sciences, who
conducted a geophysical survey of selected parts of the site.
As every year from the beginning of our explorations on Tell Arbid in 1996, the expedition has benefited from the
assistance (including substantial financial contribution) of our Syrian colleagues and associates from the Direction
General of Antiquities and Museums. We owe special thanks to Dr. Tamam Fakush, Director General, as well as to
Dr. Michel al-Maqdissi, Director of the Excavations Department, for their friendly interest and encouragement. Neither
should we fail to mention here Mr. Abed Abdel Messih Bardo, Regional Director of Antiquities in Hassake, whose
regular visits, friendly advice and constant support in solving numerous problems were invaluable.