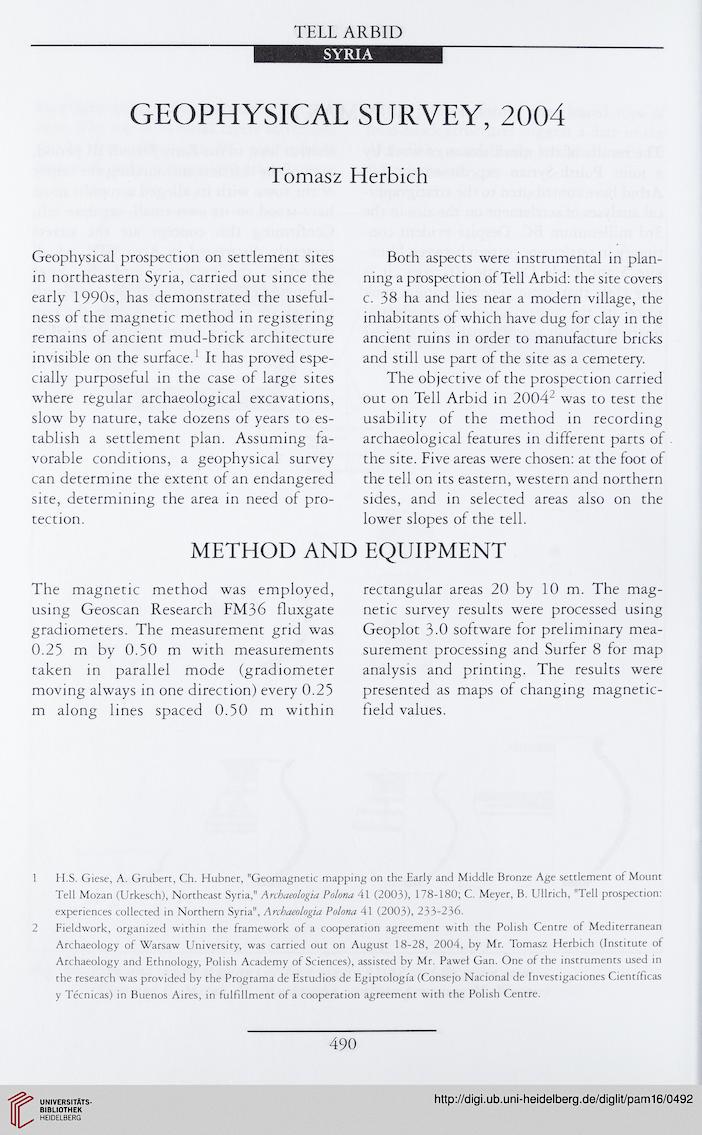 Geophysical prospection on settlement sites
in northeastern Syria, carried out since the
early 1990s, has demonstrated the useful-
ness of the magnetic method in registering
remains of ancient mud-brick architecture
invisible on the surface.1 It has proved espe-
cially purposeful in the case of large sites
where regular archaeological excavations,
slow by nature, take dozens of years to es-
tablish a settlement plan. Assuming fa-
vorable conditions, a geophysical survey
can determine the extent of an endangered
site, determining the area in need of pro-
tection.
METHOD AND
The magnetic method was employed,
using Geoscan Research FM36 fluxgate
gradiometers. The measurement grid was
0.25 m by 0.50 m with measurements
taken in parallel mode (gradiometer
moving always in one direction) every 0.25
m along lines spaced 0.50 m within

Both aspects were instrumental in plan-
ning a prospection of Tell Arbid: the site covers
c. 38 ha and lies near a modern village, the
inhabitants of which have dug for clay in the
ancient mins in order to manufacture bricks
and still use part of the site as a cemetery.
The objective of the prospection carried
out on Tell Arbid in 20042 was to test the
usability of the method in recording
archaeological features in different parts of
the site. Five areas were chosen: at the foot of
the tell on its eastern, western and northern
sides, and in selected areas also on the
lower slopes of the tell.
EQUIPMENT
rectangular areas 20 by 10 m. The mag-
netic survey results were processed using
Geoplot 3.0 software for preliminary mea-
surement processing and Surfer 8 for map
analysis and printing. The results were
presented as maps of changing magnetic-
field values.

1 H.S. Giese, A. Grubert, Ch. Hubner, "Geomagnetic mapping on the Early and Middle Bronze Age settlement of Mount
Tell Mozan (Urkesch), Northeast Syria," Archaeologia Polona 41 (2003), 178-180; C. Meyer, B. Ullrich, "Tell prospection:
experiences collected in Northern Syria", Archaeologia Polona 41 (2003), 233-236.
2 Fieldwork, organized within the framework of a cooperation agreement with the Polish Centre of Mediterranean
Archaeology of Warsaw University, was carried out on August 18-28, 2004, by Mr. Tomasz Herbich (Institute of
Archaeology and Ethnology, Polish Academy of Sciences), assisted by Mr. Pawel Gan. One of the instruments used in
the research was provided by the Programa de Estudios de Egiptologfa (Consejo Nacional de Investigaciones Cientfficas
y Tecnicas) in Buenos Aires, in fulfillment of a cooperation agreement with the Polish Centre.