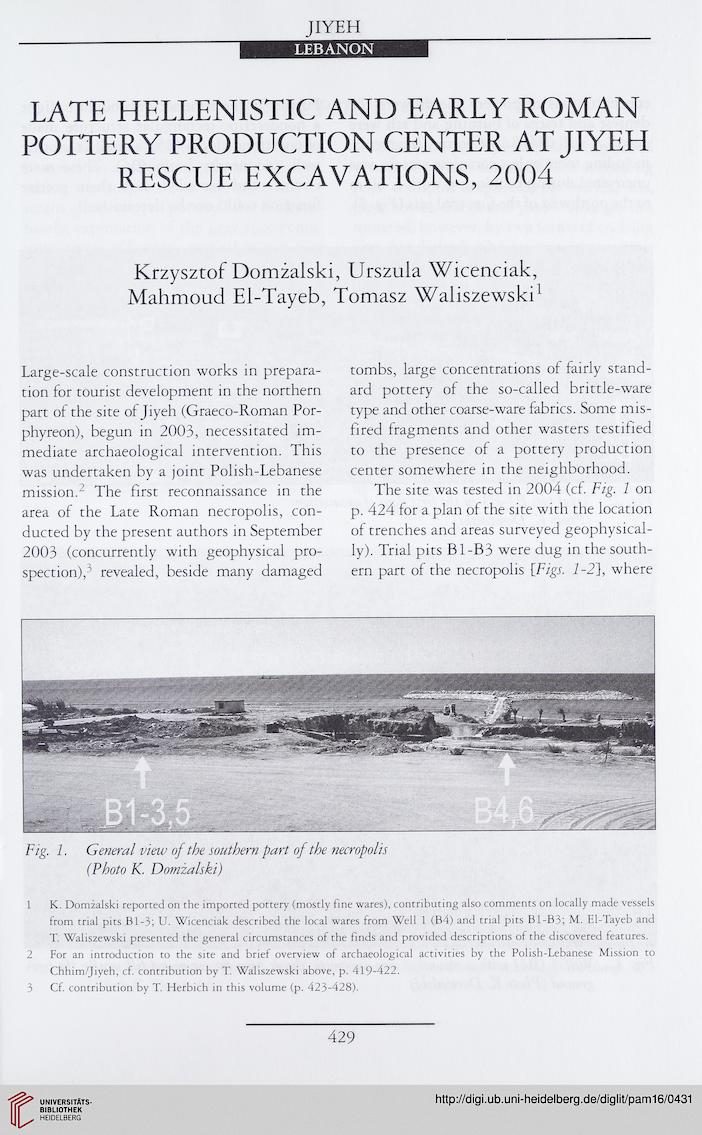 Large-scale construction works in prepara-
tion for tourist development in the northern
part of the site of Jiyeh (Graeco-Roman Por-
phyreon), begun in 2003, necessitated im-
mediate archaeological intervention. This
was undertaken by a joint Polish-Lebanese
mission.2 The first reconnaissance in the
area of the Late Roman necropolis, con-
ducted by the present authors in September
2003 (concurrently with geophysical pro-
spection),3 revealed, beside many damaged

tombs, large concentrations of fairly stand-
ard pottery of the so-called brittle-ware
type and other coarse-ware fabrics. Some mis-
fired fragments and other wasters testified
to the presence of a pottery production
center somewhere in the neighborhood.
The site was tested in 2004 (cf. Fig. 1 on
p. 424 for a plan of the site with the location
of trenches and areas surveyed geophysical-
ly). Trial pits B1-B3 were dug in the south-
ern part of the necropolis [Figs. 1-2], where


Fig. 1. General view of the southern part of the necropolis
(Photo K. Domzalski)

1 K. Domzalski reported on the imported pottery (mostly fine wares), contributing also comments on locally made vessels
from trial pits B1 -3; U. Wicenciak described the local wares from Well 1 (B4) and trial pits B1-B3; M. El-Tayeb and
T. Waliszewski presented the general circumstances of the finds and provided descriptions of the discovered features.
2 For an introduction to the site and brief overview of archaeological activities by the Polish-Lebanese Mission to
Chhim/Jiyeh, cf. contribution by T. Waliszewski above, p. 419-422.
3 Cf. contribution by T. Herbich in this volume (p. 423-428).