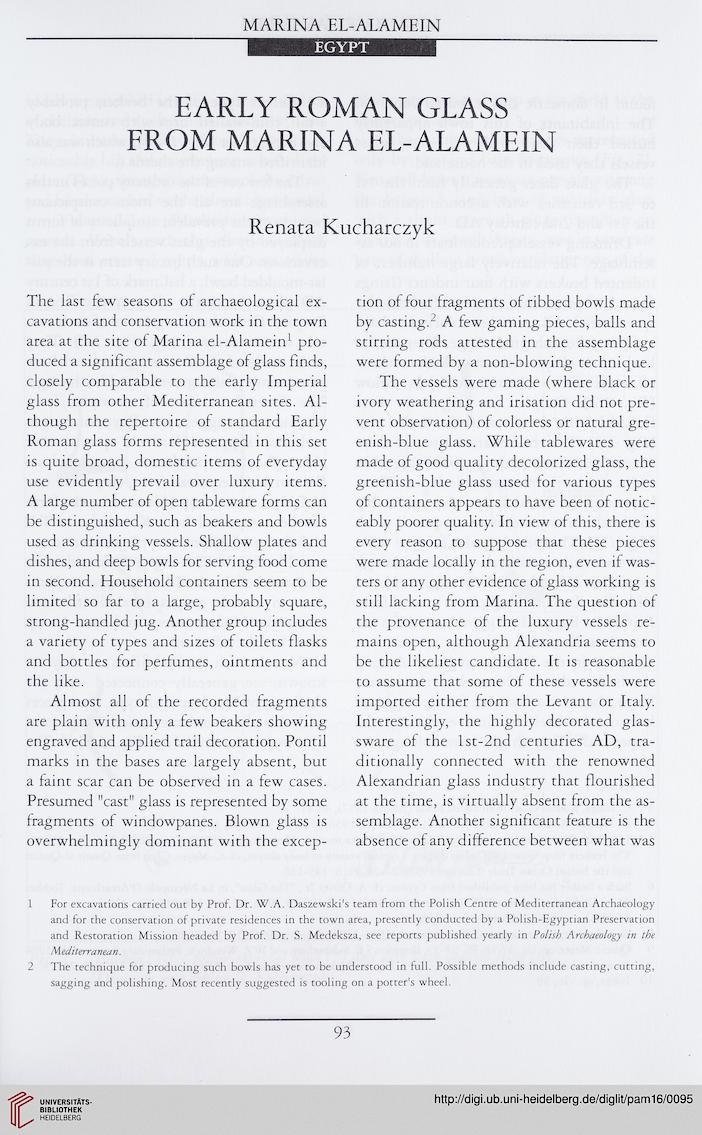 The last few seasons of archaeological ex-
cavations and conservation work in the town
area at the site of Marina el-Alamein1 pro-
duced a significant assemblage of glass finds,
closely comparable to the early Imperial
glass from other Mediterranean sites. Al-
though the repertoire of standard Early
Roman glass forms represented in this set
is quite broad, domestic items of everyday
use evidently prevail over luxury items.
A large number of open tableware forms can
be distinguished, such as beakers and bowls
used as drinking vessels. Shallow plates and
dishes, and deep bowls for serving food come
in second. Household containers seem to be
limited so far to a large, probably square,
strong-handled jug. Another group includes
a variety of types and sizes of toilets flasks
and bottles for perfumes, ointments and
the like.
Almost all of the recorded fragments
are plain with only a few beakers showing
engraved and applied trail decoration. Pontil
marks in the bases are largely absent, but
a faint scar can be observed in a few cases.
Presumed "cast" glass is represented by some
fragments of windowpanes. Blown glass is
overwhelmingly dominant with the excep-

tion of four fragments of ribbed bowls made
by casting.2 A few gaming pieces, balls and
stirring rods attested in the assemblage
were formed by a non-blowing technique.
The vessels were made (where black or
ivory weathering and irisation did not pre-
vent observation) of colorless or natural gre-
enish-blue glass. While tablewares were
made of good quality decolorized glass, the
greenish-blue glass used for various types
of containers appears to have been of notic-
eably poorer quality. In view of this, there is
every reason to suppose that these pieces
were made locally in the region, even if was-
ters or any other evidence of glass working is
still lacking from Marina. The question of
the provenance of the luxury vessels re-
mains open, although Alexandria seems to
be the likeliest candidate. It is reasonable
to assume that some of these vessels were
imported either from the Levant or Italy.
Interestingly, the highly decorated glas-
sware of the lst-2nd centuries AD, tra-
ditionally connected with the renowned
Alexandrian glass industry that flourished
at the time, is virtually absent from the as-
semblage. Another significant feature is the
absence of any difference between what was

1 For excavations carried our by Prof. Dr. W.A. Daszewski's team from the Polish Centre of Mediterranean Archaeology
and for the conservation of private residences in the town area, presently conducted by a Polish-Egyptian Preservation
and Restoration Mission headed by Prof Dr. S. Medeksza, see reports published yearly in Polish Archaeology in the
Mediterranean.
2 The technique for producing such bowls has yet to be understood in full. Possible methods include casting, cutting,
sagging and polishing. Most recently suggested is tooling on a potter's wheel.