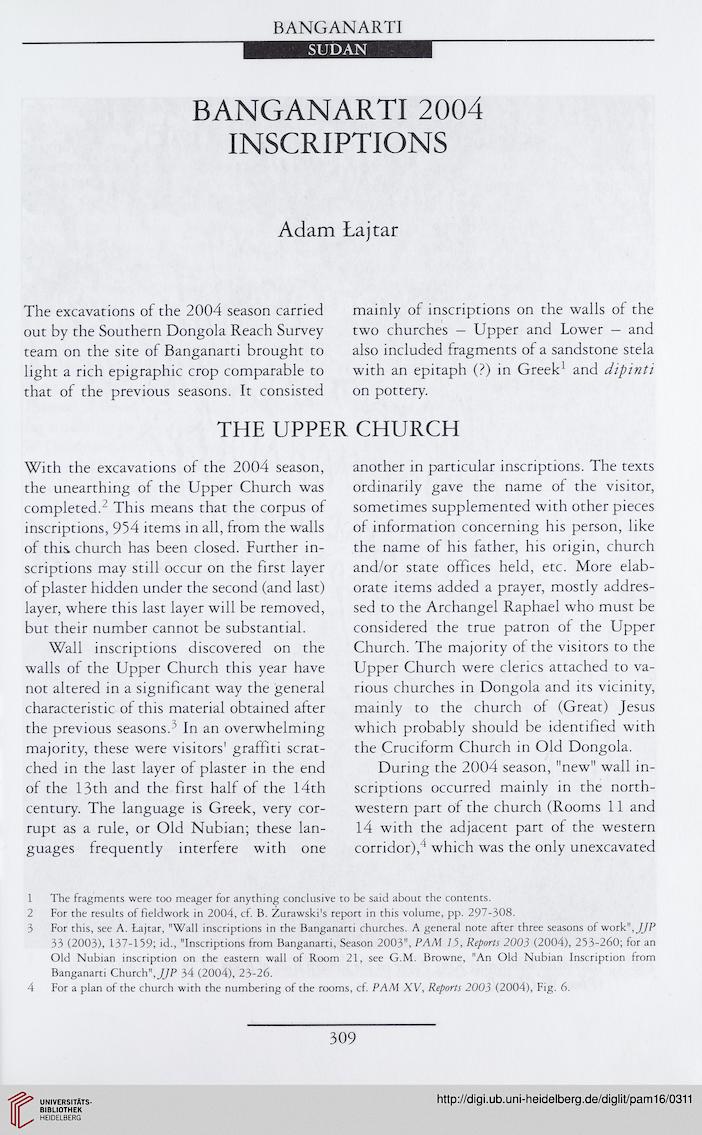 The excavations of the 2004 season carried
out by the Southern Dongola Reach Survey
team on the site of Banganarti brought to
light a rich epigraphic crop comparable to
that of the previous seasons. It consisted
THE UPPER
With the excavations of the 2004 season,
the unearthing of the Upper Church was
completed.2 This means that the corpus of
inscriptions, 954 items in all, from the walls
of this church has been closed. Further in-
scriptions may still occur on the first layer
of plaster hidden under the second (and last)
layer, where this last layer will be removed,
but their number cannot be substantial.
Wall inscriptions discovered on the
walls of the Upper Church this year have
not altered in a significant way the general
characteristic of this material obtained after
the previous seasons.3 In an overwhelming
majority, these were visitors' graffiti scrat-
ched in the last layer of plaster in the end
of the 13th and the first half of the 14th
century. The language is Greek, very cor-
rupt as a rule, or Old Nubian; these lan-
guages frequently interfere with one

mainly of inscriptions on the walls of the
two churches — Upper and Lower — and
also included fragments of a sandstone stela
with an epitaph (?) in Greek1 and dipinti
on pottery.
CHURCH
another in particular inscriptions. The texts
ordinarily gave the name of the visitor,
sometimes supplemented with other pieces
of information concerning his person, like
the name of his father, his origin, church
and/or state offices held, etc. More elab-
orate items added a prayer, mostly addres-
sed to the Archangel Raphael who must be
considered the true patron of the Upper
Church. The majority of the visitors to the
Upper Church were clerics attached to va-
rious churches in Dongola and its vicinity,
mainly to the church of (Great) Jesus
which probably should be identified with
the Cruciform Church in Old Dongola.
During the 2004 season, "new" wall in-
scriptions occurred mainly in the north-
western part of the church (Rooms 11 and
14 with the adjacent part of the western
corridor),4 which was the only unexcavated