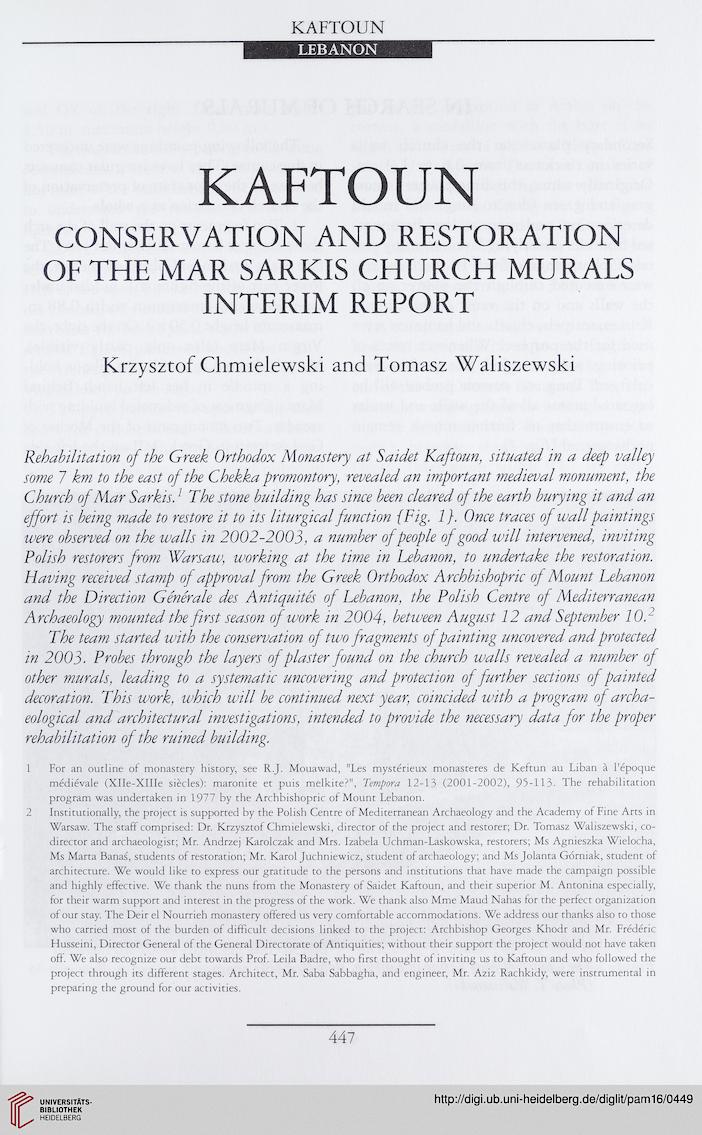 Rehabilitation of the Greek Orthodox Monastery at Saidet Kaftoun, situated in a deep valley
some 7 km to the east of the Chekka promontory, revealed an important medieval monument, the
Church of Mar Sarkis.1 The stone building has since been cleared of the earth burying it and an
effort is being made to restore it to its liturgical function (Fig. 1 }■ Once traces of wall paintings
were observed on the walls in 2002-2003, a number of people of good will intervened, inviting
Polish restorers from Warsaw, working at the time in Lebanon, to undertake the restoration.
Having received stamp of approval from the Greek Orthodox Archbishopric of Mount Lebanon
and the Direction Generale des Antiquites of Lebanon, the Polish Centre of Mediterranean
Archaeology mounted the first season of work in 2004, between August 12 and September 10.2
The team started with the conservation of two fragments of painting uncovered and protected
in 2003- Probes through the layers of plaster found on the church walls revealed a number of
other murals, leading to a systematic uncovering and protection of further sections of painted
decoration. This work, which will be continued next year, coincided with a program of archa-
eological and architectural investigations, intended to provide the necessary data for the proper
rehabilitation of the ruined building.
1 For an outline of monastery history, see R.J. Mouawad, "Les mysterieux monasteres de Keftun au Liban a l'epoque
medievale (Xlle-XIIIe siecles): maronite et puis melkite?", Tempora 12-13 (2001-2002), 95-113. The rehabilitation
program was undertaken in 1977 by the Archbishopric of Mount Lebanon.
2 Institutionally, the project is supported by the Polish Centre of Mediterranean Archaeology and the Academy of Fine Arts in
Warsaw. The staff comprised: Dr. Krzysztof Chmielewski, director of the project and restorer; Dr. Tomasz Waliszewski, co-
director and archaeologist; Mr. Andrzej Karolczak and Mrs. Izabela Uchman-Laskowska, restorers; Ms Agnieszka Wielocha,
Ms Marta Banas, students of restoration; Mr. Karol Juchniewicz, student of archaeology; and Ms Jolanta Gorniak, student of
architecture. We would like to express our gratitude to the persons and institutions that have made the campaign possible
and highly effective. We thank the nuns from the Monastery of Saidet Kaftoun, and their superior M. Antonina especially,
for their warm support and interest in the progress of the work. We thank also Mme Maud Nahas for the perfect organization
of our stay. The Deir el Nourrieh monastery offered us very comfortable accommodations. We address our thanks also to those
who carried most of the burden of difficult decisions linked to the project: Archbishop Georges Khodr and Mr. Frederic
Husseini, Director General of the General Directorate of Antiquities; without their support the project would not have taken
off. We also recognize our debt towards Prof. Leila Badre, who first thought of inviting us to Kaftoun and who followed the
project through its different stages. Architect, Mr. Saba Sabbagha, and engineer, Mr. Aziz Rachkidy, were instrumental in
preparing the ground for our activities.