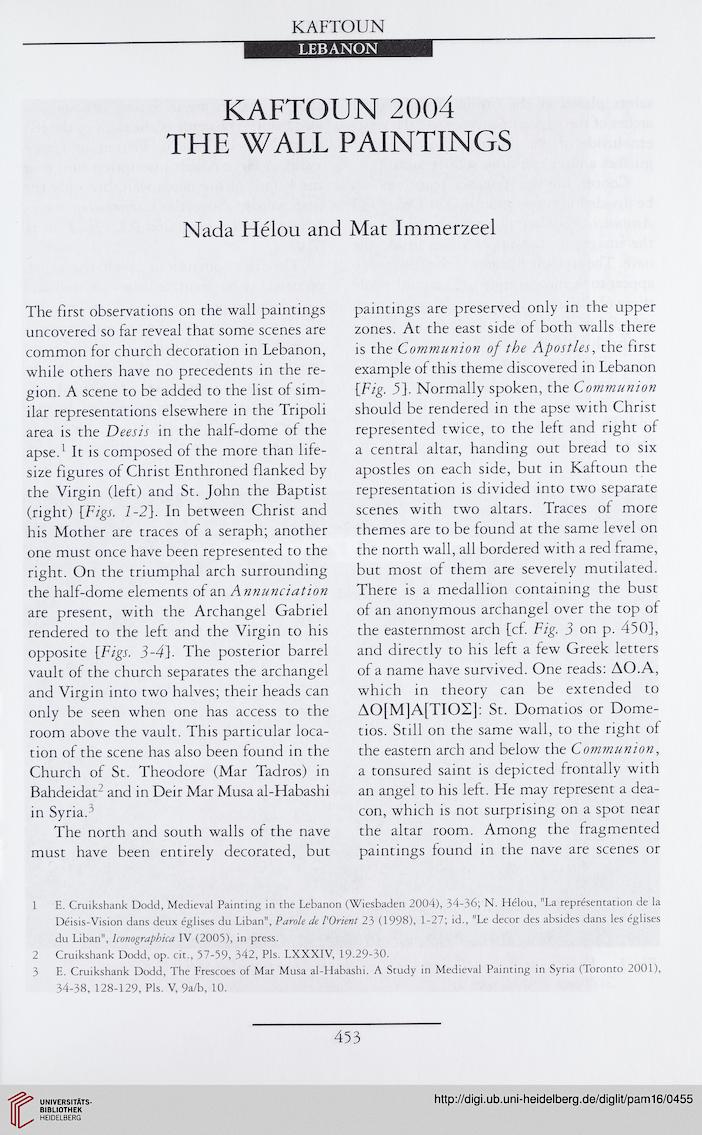 The first observations on the wall paintings
uncovered so far reveal that some scenes are
common for church decoration in Lebanon,
while others have no precedents in the re-
gion. A scene to be added to the list of sim-
ilar representations elsewhere in the Tripoli
area is the Deesis in the half-dome of the
apse.1 It is composed of the more than life-
size figures of Christ Enthroned flanked by
the Virgin (left) and St. John the Baptist
(right) [Figs. 1-2}. In between Christ and
his Mother are traces of a seraph; another
one must once have been represented to the
right. On the triumphal arch surrounding
the half-dome elements of an Annunciation
are present, with the Archangel Gabriel
rendered to the left and the Virgin to his
opposite [Figs. 3-4}- The posterior barrel
vault of the church separates the archangel
and Virgin into two halves; their heads can
only be seen when one has access to the
room above the vault. This particular loca-
tion of the scene has also been found in the
Church of St. Theodore (Mar Tadros) in
Bahdeidat2 and in Deir Mar Musa al-Habashi
in Syria.3
The north and south walls of the nave
must have been entirely decorated, but

paintings are preserved only in the upper
zones. At the east side of both walls there
is the Communion of the Apostles, the first
example of this theme discovered in Lebanon
[Fig. 3}. Normally spoken, the Communion
should be rendered in the apse with Christ
represented twice, to the left and right of
a central altar, handing out bread to six
apostles on each side, but in Kaftoun the
representation is divided into two separate
scenes with two altars. Traces of more
themes are to be found at the same level on
the north wall, all bordered with a red frame,
but most of them are severely mutilated.
There is a medallion containing the bust
of an anonymous archangel over the top of
the easternmost arch [cf. Fig. 3 on p. 450],
and directly to his left a few Greek letters
of a name have survived. One reads: AO.A,
which in theory can be extended to
A0[M]A[TI02]: St. Domatios or Dome-
tios. Still on the same wall, to the right of
the eastern arch and below the Communion,
a tonsured saint is depicted frontally with
an angel to his left. He may represent a dea-
con, which is not surprising on a spot near
the altar room. Among the fragmented
paintings found in the nave are scenes or