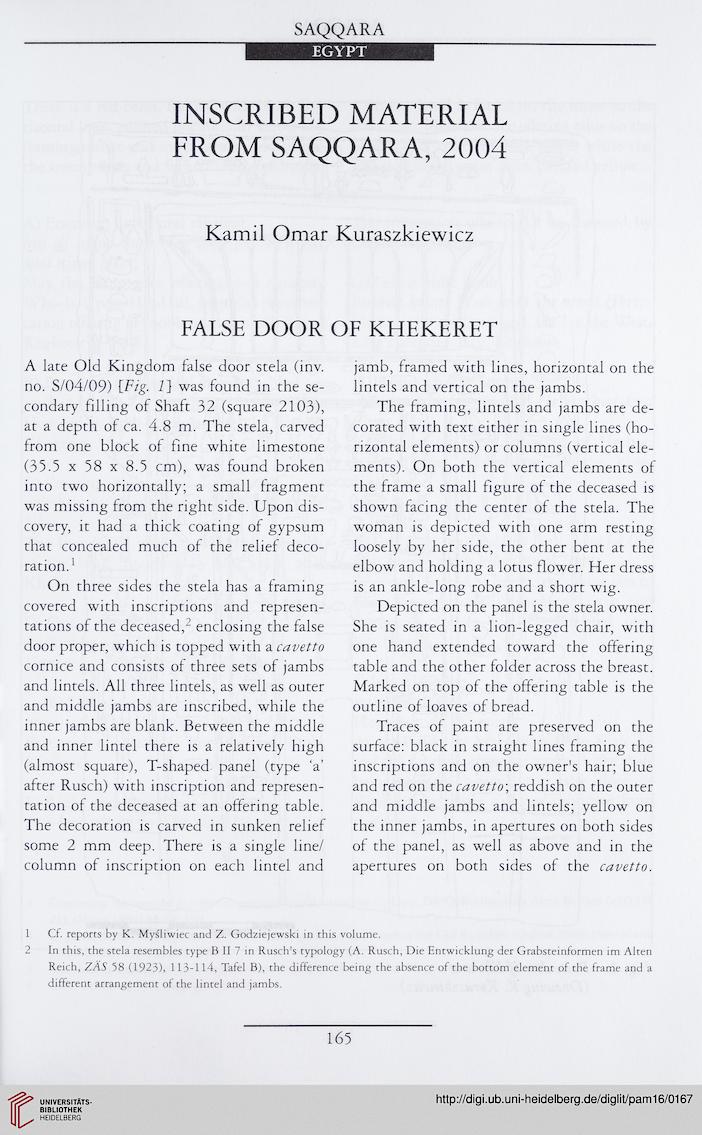 A late Old Kingdom false door stela (inv.
no. S/04/09) [Fig- 1] was found in the se-
condary filling of Shaft 32 (square 2103),
at a depth of ca. 4.8 m. The stela, carved
from one block of fine white limestone
(35.5 x 58 x 8.5 cm), was found broken
into two horizontally; a small fragment
was missing from the right side. Upon dis-
covery, it had a thick coating of gypsum
that concealed much of the relief deco-
ration.1
On three sides the stela has a framing
covered with inscriptions and represen-
tations of the deceased,2 enclosing the false
door proper, which is topped with a cavetto
cornice and consists of three sets of jambs
and lintels. All three lintels, as well as outer
and middle jambs are inscribed, while the
inner jambs are blank. Between the middle
and inner lintel there is a relatively high
(almost square), T-shaped panel (type ‘a’
after Rusch) with inscription and represen-
tation of the deceased at an offering table.
The decoration is carved in sunken relief
some 2 mm deep. There is a single line/
column of inscription on each lintel and

jamb, framed with lines, horizontal on the
lintels and vertical on the jambs.
The framing, lintels and jambs are de-
corated with text either in single lines (ho-
rizontal elements) or columns (vertical ele-
ments). On both the vertical elements of
the frame a small figure of the deceased is
shown facing the center of the stela. The
woman is depicted with one arm resting
loosely by her side, the other bent at the
elbow and holding a lotus flower. Her dress
is an ankle-long robe and a short wig.
Depicted on the panel is the stela owner.
She is seated in a lion-legged chair, with
one hand extended toward the offering
table and the other folder across the breast.
Marked on top of the offering table is the
outline of loaves of bread.
Traces of paint are preserved on the
surface: black in straight lines framing the
inscriptions and on the owner's hair; blue
and red on the cavetto; reddish on the outer
and middle jambs and lintels; yellow on
the inner jambs, in apertures on both sides
of the panel, as well as above and in the
apertures on both sides of the cavetto.

1 Cf. reports by K. Mysliwiec and Z. Godziejewski in this volume.
2 In this, the stela resembles type B II 7 in Rusch's typology (A. Rusch, Die Entwicklung der Grabsteinformen im Alten
Reich, ZAS 58 (1923), 113-114, Tafel B), the difference being the absence of the bottom element of the frame and a
different arrangement of the lintel and jambs.