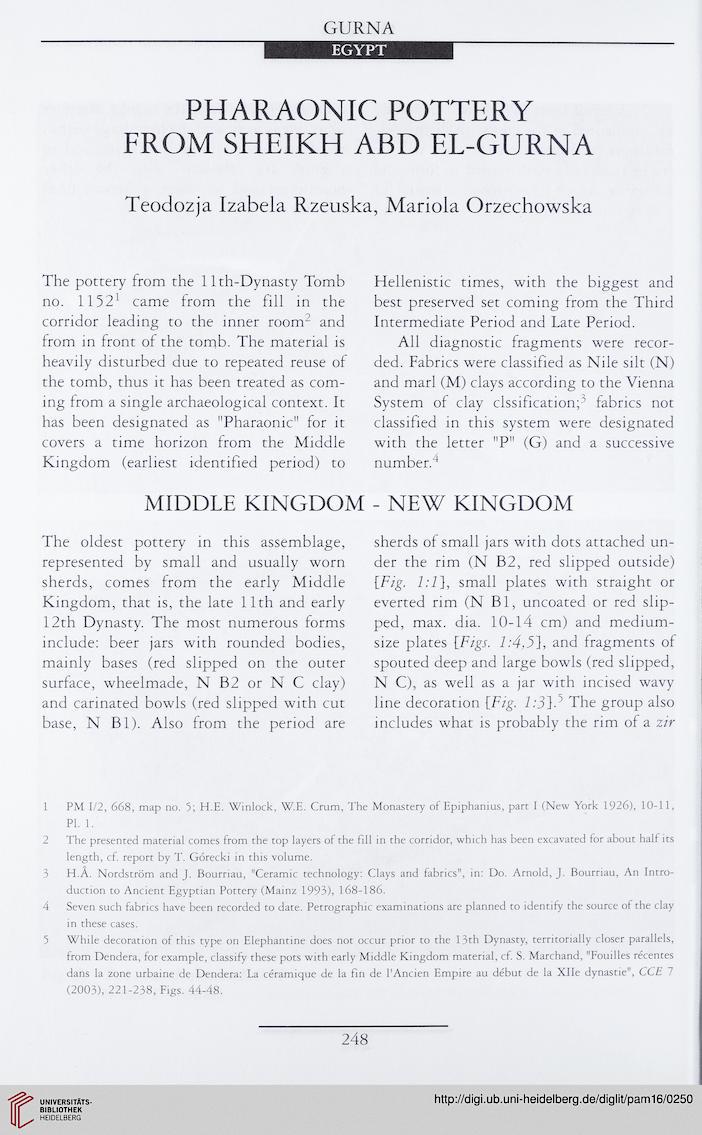 The pottery from the 11 th-Dynasty Tomb
no. 11521 came from the fill in the
corridor leading to the inner room2 and
from in front of the tomb. The material is
heavily disturbed due to repeated reuse of
the tomb, thus it has been treated as com-
ing from a single archaeological context. It
has been designated as "Pharaonic" for it
covers a time horizon from the Middle
Kingdom (earliest identified period) to
MIDDLE KINGDOl
The oldest pottery in this assemblage,
represented by small and usually worn
sherds, comes from the early Middle
Kingdom, that is, the late 11th and early
12th Dynasty. The most numerous forms
include: beer jars with rounded bodies,
mainly bases (red slipped on the outer
surface, wheelmade, N B2 or N C clay)
and carinated bowls (red slipped with cut
base, N Bl). Also from the period are

Hellenistic times, with the biggest and
best preserved set coming from the Third
Intermediate Period and Late Period.
All diagnostic fragments were recor-
ded. Fabrics were classified as Nile silt (N)
and marl (M) clays according to the Vienna
System of clay clssification;3 fabrics not
classified in this system were designated
with the letter "P" (G) and a successive
number.4 5
- NEW KINGDOM
sherds of small jars with dots attached un-
der the rim (N B2, red slipped outside)
[Fig. 1:1], small plates with straight or
everted rim (N Bl, uncoated or red slip-
ped, max. dia. 10-14 cm) and medium-
size plates [Figs. 1:4,5], and fragments of
spouted deep and large bowls (red slipped,
N C), as well as a jar with incised wavy
line decoration [Fig. 1:315 The group also
includes what is probably the rim of a zir

1 PM 1/2, 668, map no. 5; H.E. Winlock, W.E. Crum, The Monastery of Epiphanius, part I (New York 1926), 10-11,
PI. 1.
2 The presented material comes from the top layers of the fill in the corridor, which has been excavated for about half its
length, cf. report by T. Gorecki in this volume.
3 H.A. Nordstrom and J. Bourriau, "Ceramic technology: Clays and fabrics", in: Do. Arnold, J. Bourriau, An Intro-
duction to Ancient Egyptian Pottery (Mainz 1993), 168-186.
4 Seven such fabrics have been recorded to date. Petrographic examinations are planned to identify the source of the clay
in these cases.
5 While decoration of this type on Elephantine does not occur prior to the 13th Dynasty, territorially closer parallels,
from Dendera, for example, classify these pots with early Middle Kingdom material, cf. S. Marchand, "Fouilles recentes
dans la zone urbaine de Dendera: La ceramique de la fin de l'Ancien Empire au debut de la Xlle dynastie", CCE 1
(2003), 221-238, Figs. 44-48.