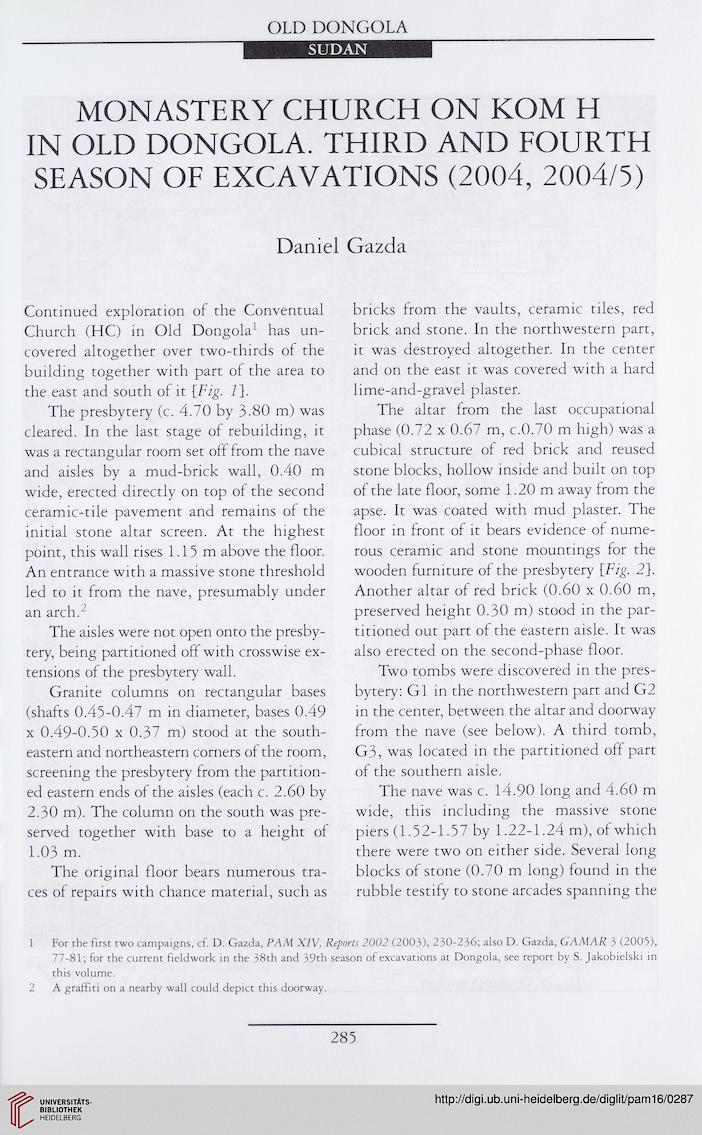 Continued exploration of the Conventual
Church (HC) in Old Dongola1 has un-
covered altogether over two-thirds of the
building together with part of the area to
the east and south of it [Fig. 1}.
The presbytery (c. 4.70 by 3-80 m) was
cleared. In the last stage of rebuilding, it
was a rectangular room set off from the nave
and aisles by a mud-brick wall, 0.40 m
wide, erected directly on top of the second
ceramic-tile pavement and remains of the
initial stone altar screen. At the highest
point, this wall rises 1.15 m above the floor.
An entrance with a massive stone threshold
led to it from the nave, presumably under
an arch.2
The aisles were not open onto the presby-
tery, being partitioned off with crosswise ex-
tensions of the presbytery wall.
Granite columns on rectangular bases
(shafts 0.45-0.47 m in diameter, bases 0.49
x 0.49-0.50 x 0.37 m) stood at the south-
eastern and northeastern corners of the room,
screening the presbytery from the partition-
ed eastern ends of the aisles (each c. 2.60 by
2.30 m). The column on the south was pre-
served together with base to a height of
1.03 m.
The original floor bears numerous tra-
ces of repairs with chance material, such as

bricks from the vaults, ceramic tiles, red
brick and stone. In the northwestern part,
it was destroyed altogether. In the center
and on the east it was covered with a hard
lime-and-gravel plaster.
The altar from the last occupational
phase (0.72 x 0.67 m, c.0.70 m high) was a
cubical structure of red brick and reused
stone blocks, hollow inside and built on top
of the late floor, some 1.20 m away from the
apse. It was coated with mud plaster. The
floor in front of it bears evidence of nume-
rous ceramic and stone mountings for the
wooden furniture of the presbytery [Fig. 2].
Another altar of red brick (0.60 x 0.60 m,
preserved height 0.30 m) stood in the par-
titioned out part of the eastern aisle. It was
also erected on the second-phase floor.
Two tombs were discovered in the pres-
bytery: G1 in the northwestern part and G2
in the center, between the altar and doorway
from the nave (see below). A third tomb,
G3, was located in the partitioned off part
of the southern aisle.
The nave was c. 14.90 long and 4.60 m
wide, this including the massive stone
piers (1.52-1.57 by 1.22-1.24 m), of which
there were two on either side. Several long
blocks of stone (0.70 m long) found in the
rubble testify to stone arcades spanning the