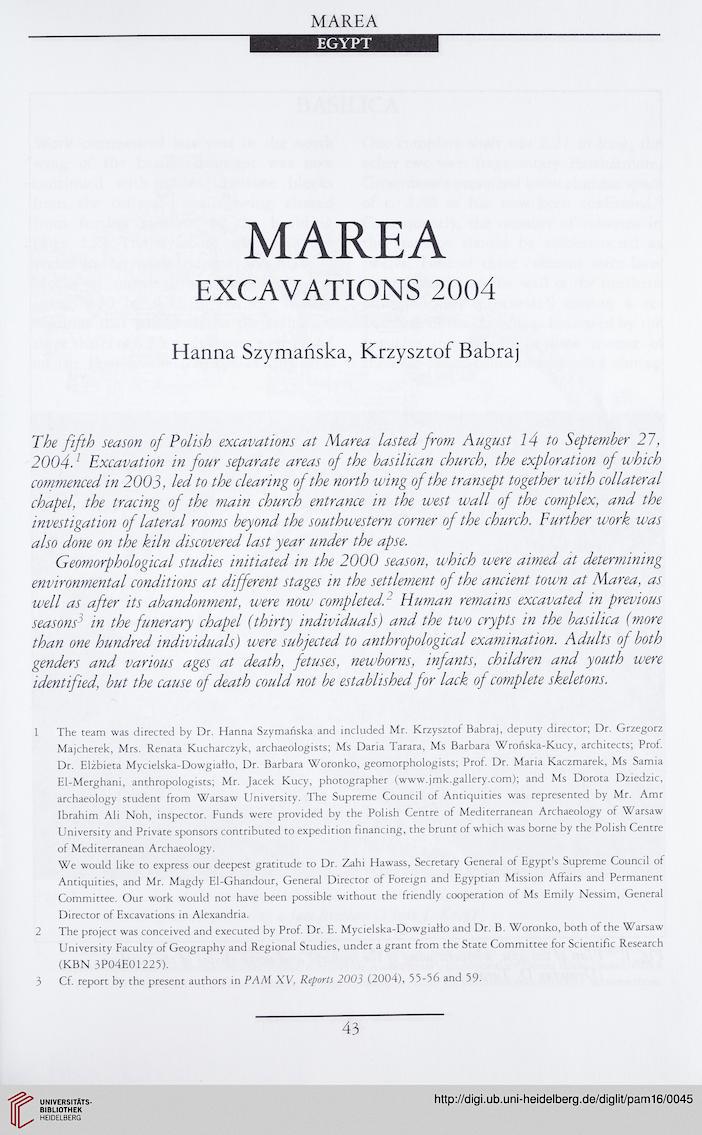 The fifth season of Polish excavations at Marea lasted from August 14 to September 21,
2004.1 2 Excavation in four separate areas of the basilican church, the exploration of which
commenced in 2003, led to the clearing of the north wing of the transept together with collateral
chapel, the tracing of the main church entrance in the west wall of the complex, and the
investigation of lateral rooms beyond the southwestern corner of the church. Further work was
also done on the kiln discovered last year under the apse.
Geomorphological studies initiated in the 2000 season, which were aimed at determining
environmental conditions at different stages in the settlement of the ancient town at Marea, as
well as after its abandonment, were now completedr Human remains excavated in previous
seasons3 in the funerary chapel (thirty individuals) and the two crypts in the basilica (more
than one hundred individuals) were subjected to anthropological examination. Adults of both
genders and various ages at death, fetuses, newborns, infants, children and youth were
identified, but the cause of death could not be established for lack of complete skeletons.

1 The team was directed by Dr. Hanna Szymanska and included Mr. Krzysztof Babraj, deputy director; Dr. Grzegorz
Majcherek, Mrs. Renata Kucharczyk, archaeologists; Ms Daria Tarara, Ms Barbara Wronska-Kucy, architects; Prof.
Dr. Elzbieta Mycielska-Dowgiallo, Dr. Barbara Woronko, geomorphologists; Prof. Dr. Maria Kaczmarek, Ms Sarnia
El-Merghani, anthropologists; Mr. Jacek Kucy, photographer (www.jmk.gallery.com); and Ms Dorota Dziedzic,
archaeology student from Warsaw University. The Supreme Council of Antiquities was represented by Mr. Amr
Ibrahim Ali Noh, inspector. Funds were provided by the Polish Centre of Mediterranean Archaeology of Warsaw
University and Private sponsors contributed to expedition financing, the brunt of which was borne by the Polish Centre
of Mediterranean Archaeology.
We would like to express our deepest gratitude to Dr. Zahi Hawass, Secretary General of Egypt's Supreme Council of
Antiquities, and Mr. Magdy El-Ghandour, General Director of Foreign and Egyptian Mission Affairs and Permanent
Committee. Our work would not have been possible without the friendly cooperation of Ms Emily Nessim, General
Director of Excavations in Alexandria.
2 The project was conceived and executed by Prof. Dr. E. Mycielska-Dowgiallo and Dr. B. Woronko, both of the Warsaw
University Faculty of Geography and Regional Studies, under a grant from the State Committee for Scientific Research
(KBN 3P04E01225).
3 Cf. report by the present authors in PAM XV, Reports 2003 (2004), 55-56 and 59-