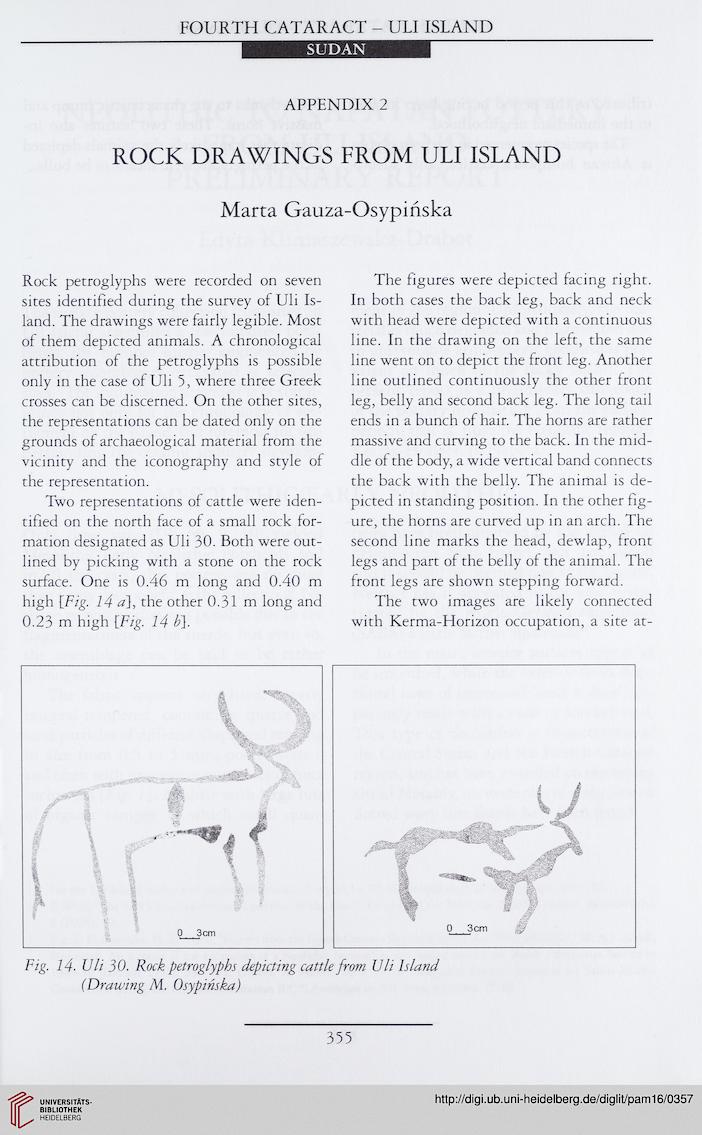 Rock petroglyphs were recorded on seven
sites identified during the survey of Uli Is-
land. The drawings were fairly legible. Most
of them depicted animals. A chronological
attribution of the petroglyphs is possible
only in the case of Uli 5, where three Greek
crosses can be discerned. On the other sites,
the representations can be dated only on the
grounds of archaeological material from the
vicinity and the iconography and style of
the representation.
Two representations of cattle were iden-
tified on the north face of a small rock for-
mation designated as Uli 30. Both were out-
lined by picking with a stone on the rock
surface. One is 0.46 m long and 0.40 m
high [Fig. 14 a], the other 0.31 m long and
0.23 m high [Fig. 14 b\

The figures were depicted facing right.
In both cases the back leg, back and neck
with head were depicted with a continuous
line. In the drawing on the left, the same
line went on to depict the front leg. Another
line outlined continuously the other front
leg, belly and second back leg. The long tail
ends in a bunch of hair. The horns are rather
massive and curving to the back. In the mid-
dle of the body, a wide vertical band connects
the back with the belly. The animal is de-
picted in standing position. In the other fig-
ure, the horns are curved up in an arch. The
second line marks the head, dewlap, front
legs and part of the belly of the animal. The
front legs are shown stepping forward.
The two images are likely connected
with Kerma-Horizon occupation, a site at-