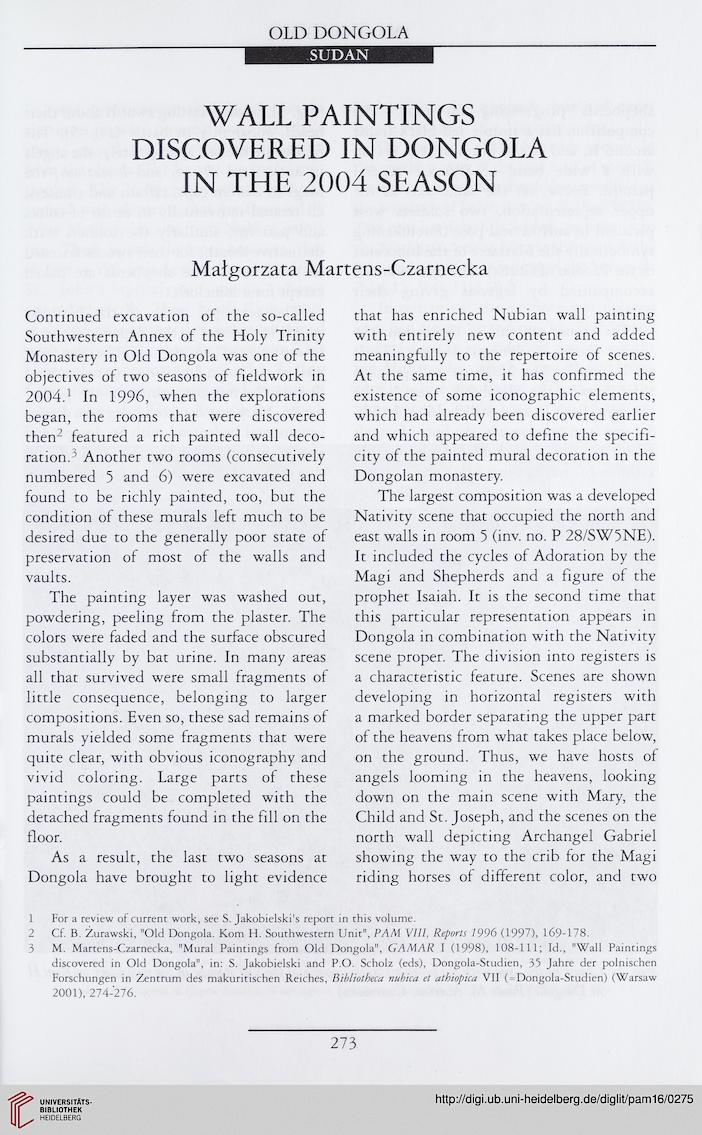 WALL PAINTINGS
DISCOVERED IN DONGOLA
IN THE 2004 SEASON

Continued excavation of the so-called
Southwestern Annex of the Holy Trinity
Monastery in Old Dongola was one of the
objectives of two seasons of fieldwork in
2004.1 In 1996, when the explorations
began, the rooms that were discovered
then2 featured a rich painted wall deco-
ration.3 Another two rooms (consecutively
numbered 5 and 6) were excavated and
found to be richly painted, too, but the
condition of these murals left much to be
desired due to the generally poor state of
preservation of most of the walls and
vaults.
The painting layer was washed out,
powdering, peeling from the plaster. The
colors were faded and the surface obscured
substantially by bat urine. In many areas
all that survived were small fragments of
little consequence, belonging to larger
compositions. Even so, these sad remains of
murals yielded some fragments that were
quite clear, with obvious iconography and
vivid coloring. Large parts of these
paintings could be completed with the
detached fragments found in the fill on the
floor.
As a result, the last two seasons at
Dongola have brought to light evidence

that has enriched Nubian wall painting
with entirely new content and added
meaningfully to the repertoire of scenes.
At the same time, it has confirmed the
existence of some iconographic elements,
which had already been discovered earlier
and which appeared to define the specifi-
city of the painted mural decoration in the
Dongolan monastery.
The largest composition was a developed
Nativity scene that occupied the north and
east walls in room 5 (inv. no. P 28/SW5NE).
It included the cycles of Adoration by the
Magi and Shepherds and a figure of the
prophet Isaiah. It is the second time that
this particular representation appears in
Dongola in combination with the Nativity
scene proper. The division into registers is
a characteristic feature. Scenes are shown
developing in horizontal registers with
a marked border separating the upper part
of the heavens from what takes place below,
on the ground. Thus, we have hosts of
angels looming in the heavens, looking
down on the main scene with Mary, the
Child and St. Joseph, and the scenes on the
north wall depicting Archangel Gabriel
showing the way to the crib for the Magi
riding horses of different color, and two