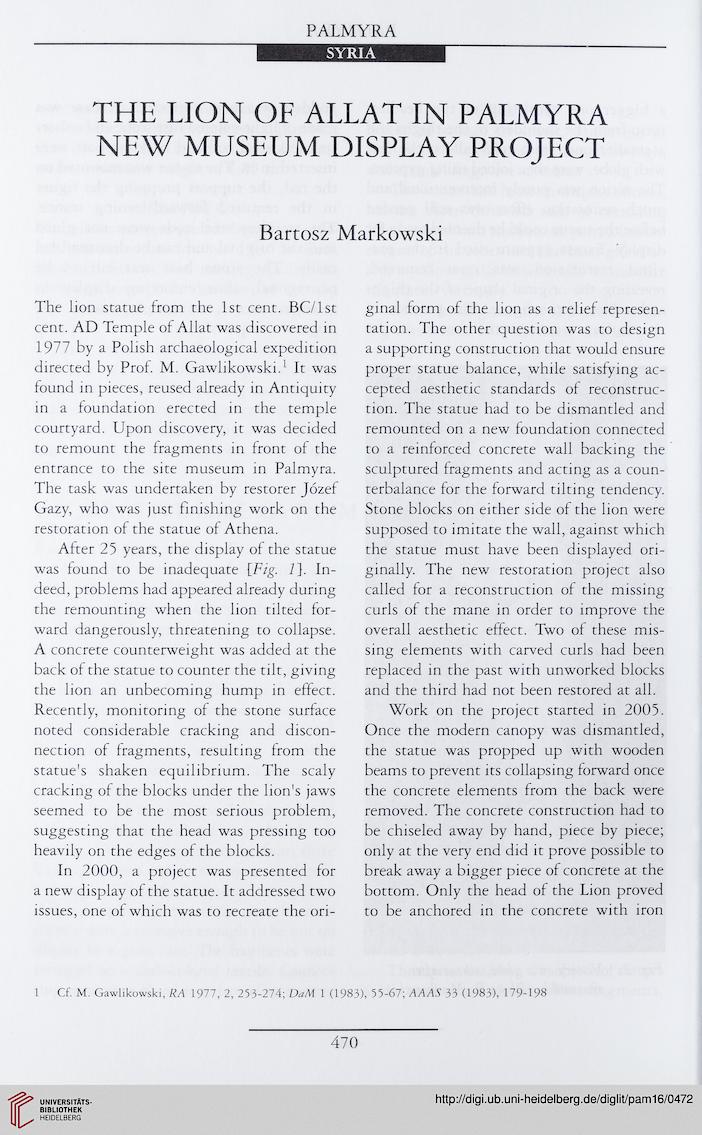 THE LION OF ALLAT IN PALMYRA
NEW MUSEUM DISPLAY PROJECT

The lion statue from the 1st cent. BC/lst
cent. AD Temple of Allat was discovered in
1977 by a Polish archaeological expedition
directed by Prof. M. Gawlikowski.1 It was
found in pieces, reused already in Antiquity
in a foundation erected in the temple
courtyard. Upon discovery, it was decided
to remount the fragments in front of the
entrance to the site museum in Palmyra.
The task was undertaken by restorer Jozef
Gazy, who was just finishing work on the
restoration of the statue of Athena.
After 25 years, the display of the statue
was found to be inadequate [Fig. 1). In-
deed, problems had appeared already during
the remounting when the lion tilted for-
ward dangerously, threatening to collapse.
A concrete counterweight was added at the
back of the statue to counter the tilt, giving
the lion an unbecoming hump in effect.
Recently, monitoring of the stone surface
noted considerable cracking and discon-
nection of fragments, resulting from the
statue's shaken equilibrium. The scaly
cracking of the blocks under the lion's jaws
seemed to be the most serious problem,
suggesting that the head was pressing too
heavily on the edges of the blocks.
In 2000, a project was presented for
a new display of the statue. It addressed two
issues, one of which was to recreate the ori-

ginal form of the lion as a relief represen-
tation. The other question was to design
a supporting construction that would ensure
proper statue balance, while satisfying ac-
cepted aesthetic standards of reconstruc-
tion. The statue had to be dismantled and
remounted on a new foundation connected
to a reinforced concrete wall backing the
sculptured fragments and acting as a coun-
terbalance for the forward tilting tendency.
Stone blocks on either side of the lion were
supposed to imitate the wall, against which
the statue must have been displayed ori-
ginally. The new restoration project also
called for a reconstruction of the missing
curls of the mane in order to improve the
overall aesthetic effect. Two of these mis-
sing elements with carved curls had been
replaced in the past with unworked blocks
and the third had not been restored at all.
Work on the project started in 2005.
Once the modern canopy was dismantled,
the statue was propped up with wooden
beams to prevent its collapsing forward once
the concrete elements from the back were
removed. The concrete construction had to
be chiseled away by hand, piece by piece;
only at the very end did it prove possible to
break away a bigger piece of concrete at the
bottom. Only the head of the Lion proved
to be anchored in the concrete with iron