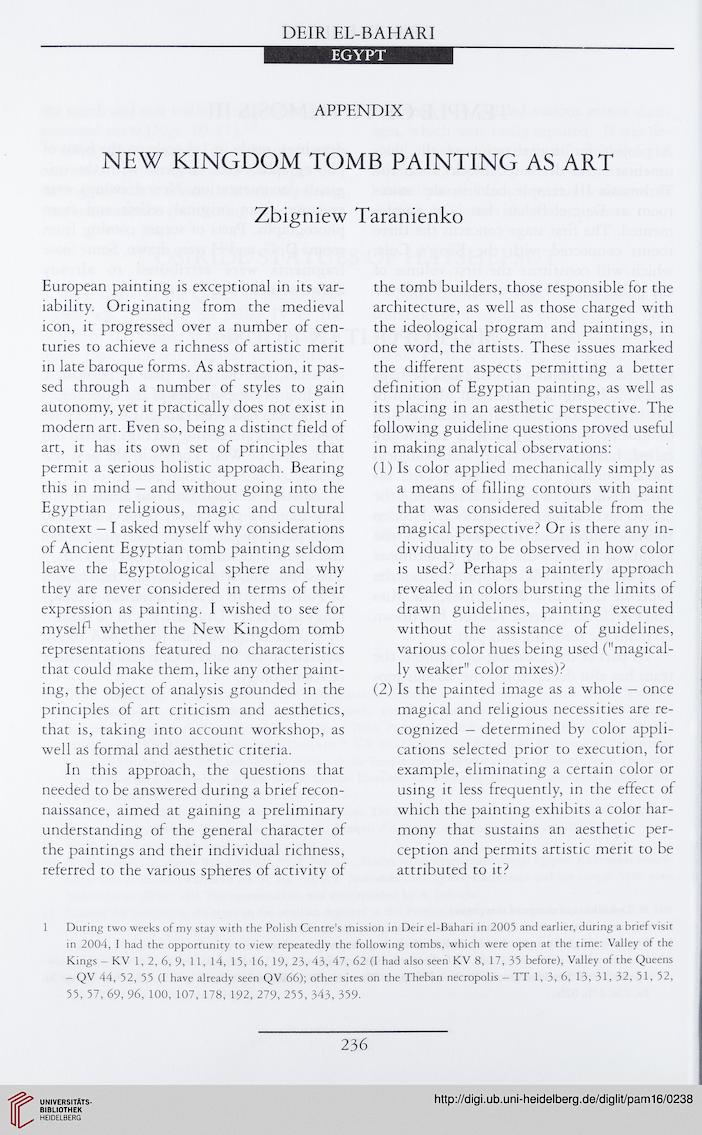 European painting is exceptional in its var-
iability. Originating from the medieval
icon, it progressed over a number of cen-
turies to achieve a richness of artistic merit
in late baroque forms. As abstraction, it pas-
sed through a number of styles to gain
autonomy, yet it practically does not exist in
modern art. Even so, being a distinct field of
art, it has its own set of principles that
permit a serious holistic approach. Bearing
this in mind — and without going into the
Egyptian religious, magic and cultural
context — I asked myself why considerations
of Ancient Egyptian tomb painting seldom
leave the Egyptological sphere and why
they are never considered in terms of their
expression as painting. I wished to see for
myself1 whether the New Kingdom tomb
representations featured no characteristics
that could make them, like any other paint-
ing, the object of analysis grounded in the
principles of art criticism and aesthetics,
that is, taking into account workshop, as
well as formal and aesthetic criteria.
In this approach, the questions that
needed to be answered during a brief recon-
naissance, aimed at gaining a preliminary
understanding of the general character of
the paintings and their individual richness,
referred to the various spheres of activity of

the tomb builders, those responsible for the
architecture, as well as those charged with
the ideological program and paintings, in
one word, the artists. These issues marked
the different aspects permitting a better
definition of Egyptian painting, as well as
its placing in an aesthetic perspective. The
following guideline questions proved useful
in making analytical observations:
(1) Is color applied mechanically simply as
a means of filling contours with paint
that was considered suitable from the
magical perspective? Or is there any in-
dividuality to be observed in how color
is used? Perhaps a painterly approach
revealed in colors bursting the limits of
drawn guidelines, painting executed
without the assistance of guidelines,
various color hues being used ("magical-
ly weaker" color mixes)?
(2) Is the painted image as a whole — once
magical and religious necessities are re-
cognized — determined by color appli-
cations selected prior to execution, for
example, eliminating a certain color or
using it less frequently, in the effect of
which the painting exhibits a color har-
mony that sustains an aesthetic per-
ception and permits artistic merit to be
attributed to it?