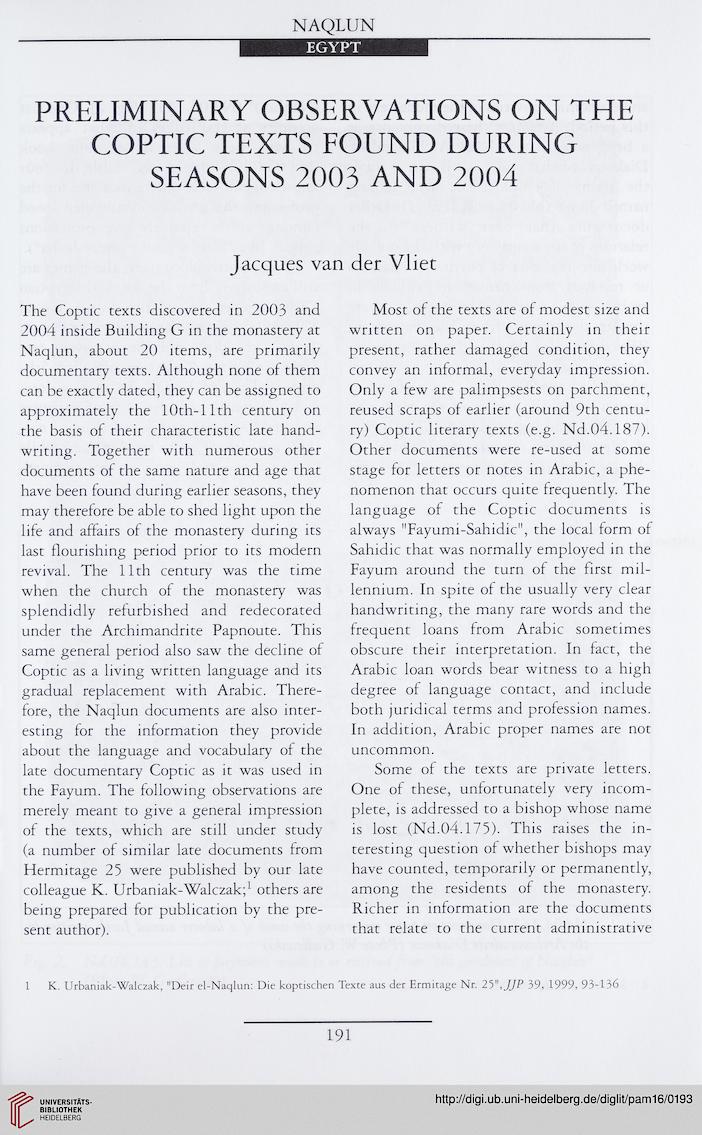 The Coptic texts discovered in 2003 and
2004 inside Building G in the monastery at
Naqlun, about 20 items, are primarily
documentary texts. Although none of them
can be exactly dated, they can be assigned to
approximately the 10th-11th century on
the basis of their characteristic late hand-
writing. Together with numerous other
documents of the same nature and age that
have been found during earlier seasons, they
may therefore be able to shed light upon the
life and affairs of the monastery during its
last flourishing period prior to its modern
revival. The 11th century was the time
when the church of the monastery was
splendidly refurbished and redecorated
under the Archimandrite Papnoute. This
same general period also saw the decline of
Coptic as a living written language and its
gradual replacement with Arabic. There-
fore, the Naqlun documents are also inter-
esting for the information they provide
about the language and vocabulary of the
late documentary Coptic as it was used in
the Fayum. The following observations are
merely meant to give a general impression
of the texts, which are still under study
(a number of similar late documents from
Hermitage 25 were published by our late
colleague K. Urbaniak-Walczak;1 others are
being prepared for publication by the pre-
sent author).

Most of the texts are of modest size and
written on paper. Certainly in their
present, rather damaged condition, they
convey an informal, everyday impression.
Only a few are palimpsests on parchment,
reused scraps of earlier (around 9th centu-
ry) Coptic literary texts (e.g. Nd.04.187).
Other documents were re-used at some
stage for letters or notes in Arabic, a phe-
nomenon that occurs quite frequently. The
language of the Coptic documents is
always "Fayumi-Sahidic", the local form of
Sahidic that was normally employed in the
Fayum around the turn of the first mil-
lennium. In spite of the usually very clear
handwriting, the many rare words and the
frequent loans from Arabic sometimes
obscure their interpretation. In fact, the
Arabic loan words bear witness to a high
degree of language contact, and include
both juridical terms and profession names.
In addition, Arabic proper names are not
uncommon.
Some of the texts are private letters.
One of these, unfortunately very incom-
plete, is addressed to a bishop whose name
is lost (Nd.04.175). This raises the in-
teresting question of whether bishops may
have counted, temporarily or permanently,
among the residents of the monastery.
Richer in information are the documents
that relate to the current administrative